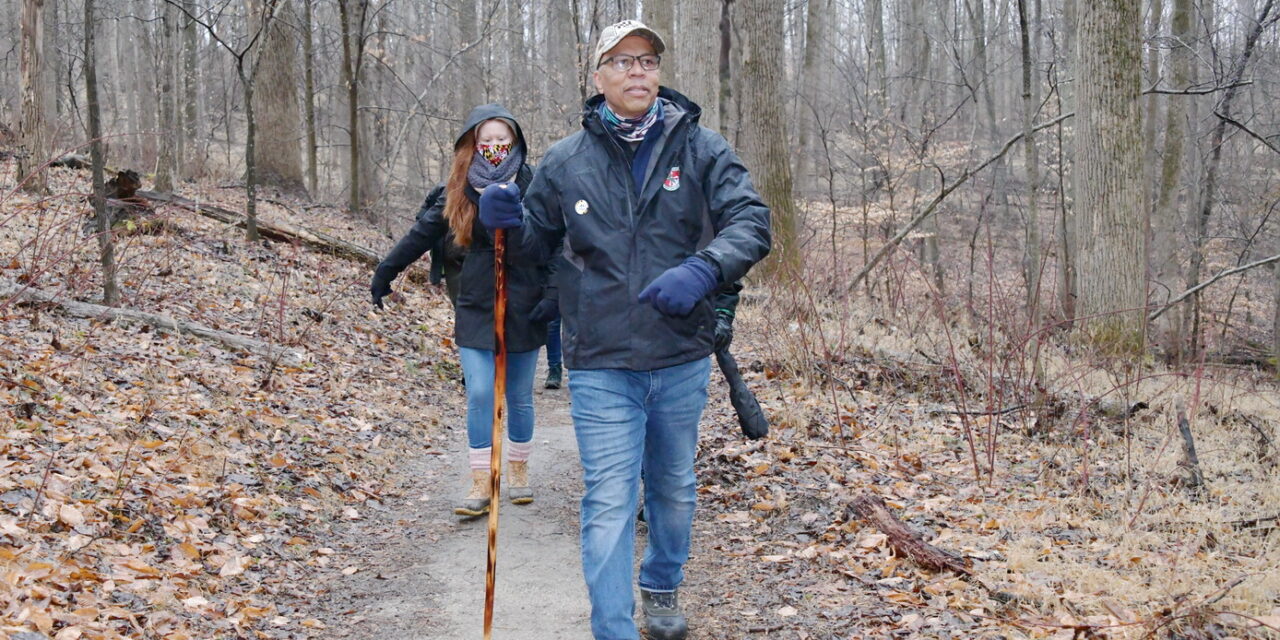 On New Year's Day, Lt. Gov. Boyd Rutherford took a hike in the McKeldin area of Patapsco State Park. Theodores McKeldin was the only other Maryland Republican to win two terms as governor back in the 1950s. Governor's Office photo by Joe Andrucyk

UPDATE 4/14/2021: Lt. Gov. Boyd Rutherford stated on his Facebook page that “after months of careful consideration and reflection, I have decided not to run to become the next governor of Maryland in 2022. This was a decision I made with my family’s best interest in mind.”

School students in Maryland and their parents should be preparing to be in school this summer to overcome the learning deficits that have happened due to lack of in-person schooling during the COVID pandemic, Lt. Gov. Boyd Rutherford, R, said in a Zoom interview Friday.

“We’re gonna have to figure out what to do in terms of the educational loss, because it’s going to be a disservice to a lot of these kids and all of us, if we just pass them along,” Rutherford said. “Before this,” he said, a lot of children get moved to the next grade “when they really were not ready … And so, it may mean that that we’re in summer school — six weeks or longer of summer classes — to get these kids back to the level they should be before they go to the next grade. A lot of parents are not gonna be happy about that.”

“People have to get to that mindset that we have to address this learning deficit that’s occurring. And so, parents, teachers and administrators — and probably more so parents than anything else — have to think … that it may not be the typical summer … that you’re running off to the beach or going on this long car trip.”

No power except what’s delegated

Of course, the lieutenant governor doesn’t have any power to make this happen nor does Gov. Larry Hogan, since the decision is up to the state Board of Education and local school boards. But it is what Rutherford thinks should happen.

In fact, Rutherford has no constitutional power to do anything other than what the governor assigns him to do. In Rutherford’s case that has been a lot since the coronavirus hit back in March 2020.

That month, Hogan asked Rutherford, who has long administrative experience at the state and federal level, to handle much of the day-to-duties not related to the public health crisis.

That has included chairing most of the meetings of the powerful Board of Public Works, whose three members must approve all major state contracts and spending, generally more than $10 billion a year.

“At the beginning, there was a lot more that was delegated — a lot of the kind of mundane decision-making on something that may come out, a statement from a department or moving forward with a regulation or signing off on some board appointments,” Rutherford said.

“We were doing a lot more of that in the beginning. And then as the [COVID] numbers went down, probably mid- to late summer, the governor picked a lot of those things back up. We’ve been kind of in an in-between mode since then” but “as we’re now rolling out the vaccine and the corona numbers have increased again … I’ve been picking up a few more of those items again.”

That’s far more than most Maryland lieutenant governors get to do, other than heading commissions and study groups, as Rutherford still does on issues such as mental health.

Considering a run for governor

The job is one he never intended to do.  Just weeks before Hogan tapped him as his running mate in early 2014, Rutherford told me at a Christmas party that he didn’t want the job.

But the State House has grown on him and he may run to succeed Hogan when his two-term limit is up in 2022.

“I am definitely considering it,” Rutherford said. “You know, several years ago, I was not interested in any of this stuff. I can remember our conversation where you asked me if I was gonna be Larry Hogan’s running mate.”

“I’m considering it because I truly believe over the last six years, we’ve done a lot of good things for the state of Maryland. And I think we’ve set a tone that is very different from what’s been going on in the national political environment. Even when we’re attacked, when we’re criticized, I think that the tone that we’ve been able to set is something that we’d like to continue.”

“Particularly as we come out of this coronavirus situation, which I have faith that we will, and we are getting the vaccines out, we are going to need to redo the economy. And it can’t be on the backs of the small businesses and businesses and the citizens of the state by just all of a sudden jacking up taxes and taking it out of the economy to fund government,” Rutherford said.

“I think there needs to be some bulwark to those in the legislature who want to do that to say, ‘No, this isn’t the direction to go. Let’s look at making government more efficient.’

“That’s really my area of — I won’t say — expertise. But in terms of government operations, I think there are a lot of things that we can do far more efficiently than what we do now. And that takes a little bit more time to work on that. So I’m really considering” running for governor.

A damaged and divided party

Rutherford is at the top of some Republican lists as the party’s likely nominee. But in a heavily Democratic state, it was unlikely that Hogan would actually win in 2014 and even more unlikely that he would become just the second Republican governor in Maryland history to win a second term. A Rutherford run could be especially difficult in the polarized political situation even within his own party, where Hogan and Rutherford have established themselves as anti-Trumpers.

Rutherford concedes that the Republican brand has taken a hit.

“I think it has been hurt. No question about it,” Rutherford said.

“Maryland is a unique state in that we surround three quarters of the nation’s capital. And so … almost half of our population tunes in exclusively to Washington media. The No. 1 industry for Washington media to cover is politics. And so, they look at Republicans as national Republicans and not necessarily what happens in the state.

“But at the same time, if people like Larry, hopefully they’ll like me. His popularity is still high, his job approval is still high. I think that transfers to our entire administration.”

Okinawa: 75th Anniversary of the Last Great Battle of the Pacific War