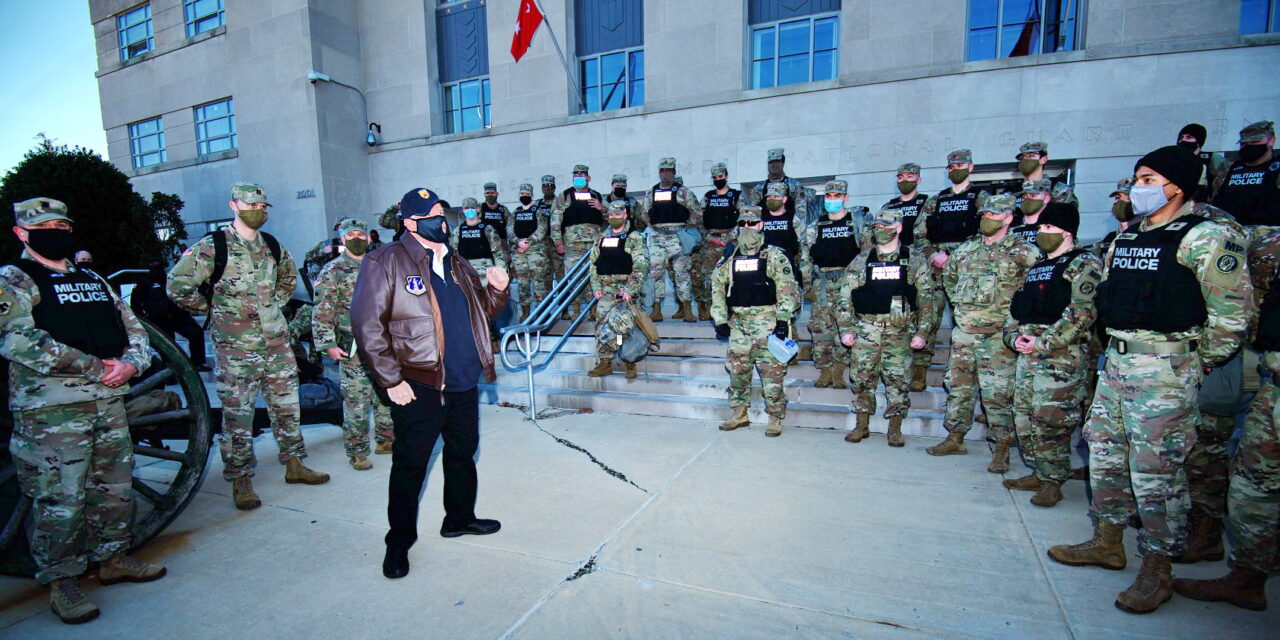 On Thursday at the D.C. Armory, Gov. Larry Hogan addressed members of the Maryland National Guard to help protect the Capitol after the riot there on Wednesday. Governor's Office photo by Joe Andrucyk

ANNAPOLIS BRACES FOR ARMED PRO-TRUMP PROTESTS: If armed protesters march on Maryland’s state capitol this Sunday the state’s law enforcement agencies will be ready to address the threat, according to Greg Shipley, spokesman for the Maryland State Police. And Gov. Larry Hogan said at a news conference on Monday morning that he is aware of the threat and that “additional security measures” will be implemented around state buildings in Annapolis, reports Bryan Renbaum of Maryland Reporter.

HOGAN PROPOSES $1B STIMULUS FOR POOREST FAMILIES, SMALL BIZ: Gov. Larry Hogan proposed a stimulus package exceeding $1 billion writes Erin Cox in the Post, suggesting the state’s poorest families should get $750 payments,  waiving state and local taxes on unemployment benefits and letting small businesses keep up to $12,000 worth of sales tax levied on their customers among other measures.

84 STATE LAWMAKERS ASK HARRIS TO RESIGN: Adam Pagnucco of Seventh State writes that a group of state legislators including 13 state senators and 71 delegates has called on District 1 Congressman Andy Harris to resign. In a letter addressed to Harris, the legislators tell him, “You have for months joined in cynical, politically motivated attempts to undermine the legitimate, free, and fair election that selected Joe Biden as the next President of the United States.”

OPINION: HARRIS SHOULD RESIGN: In an opinion piece for the Sun, Peter Jensen writes that if “honor meant anything” to U.S. Rep. Harris, “he would recognize his misdeeds and tender his resignation right now. Not because he is a Republican. Not because he is politically conservative. Not because he has long been a fawning toady to President Trump (district voters presumably endorsed his servile obedience to the liar-in-chief when he was reelected by a 63% to 36% margin in November). But because he blatantly rejected his oath of office and obligation to defend the Constitution in attempting to overturn the election.”

REP. HARRIS LOSES DONORS MARRIOTT, COMCAST: Marriott International Inc., the world’s largest hotel company, and Comcast, the parent company of NBCUniversal, was for years a steady contributor to the reelection campaigns of U.S. Rep. Andy Harris, a Baltimore County Republican. Jeff Barker of the Sun reports that the Bethesda-based hotelier and the communications giant say they are suspending contributions to the 147 Republican lawmakers, including Harris, who refused last week to certify Democratic President-elect Joe Biden’s victory.

INSURRECTION BRAGGARTS DELETING SOCIAL MEDIA TRAIL: In Maryland and beyond, those who once bragged about overrunning the Capitol are now deleting their photos and falling silent, including the adult son of a Maryland police chief and the former chairwoman of the Howard County Republican Central Committee, Tim Prudente of the Sun reports.

ARUNDEL OFFICER SUSPENDED DURING CAPITOL BREACH PROBE: The Anne Arundel County Police Department has suspended an officer with pay as the agency works with federal authorities to determine what involvement the officer may have had in the breach of the U.S. Capitol last Wednesday, Ovetta Wiggins reports for the Post.

BILLS TAKE AIM AT RACIAL DISPARITIES: Democratic leaders in the state Senate unveiled a package of recommendations Monday aimed at addressing some racial disparities in environmental policy, health and access to government contracts, among other issues, Bryn Stole of the Sun reports.

OVERRIDE OF KIRWAN VETO MAY BE DELAYED: Democrats intend to override Gov. Larry Hogan’s veto of a 10-year multibillion-dollar education reform effort, but it may not happen until the middle of the General Assembly session, writes Elizabeth Shwe in Maryland Matters. Known as the Blueprint for Maryland’s Future, the monumental bill aims to rebuild the state’s public school system through modified funding formulas and expanded programs recommended by the so-called Kirwan Commission.

MD SENATE GOP LEADERS PLAN COLLABORTION WITH DEMS: The Maryland Senate’s new Republican leaders are more conservative than their predecessors — but say they still plan to collaborate with their Democratic colleagues during the 2021 legislative session, writes Bennett Leckrone in Maryland Matters.

SPENDING BOOST FOR TRANSIT URGED: For the second year in a row, elected leaders from Central Maryland are urging the General Assembly to dramatically boost spending on the state’s existing bus and rail system, writes Bruce DePuyt in Maryland Matters. Those leaders say that without a three-quarters of a billion dollar infusion of new funds, commuters and employers in the Baltimore region would remain hamstrung by a transit network that is not reliable.

BILL WOULD OK BA CO LIBRARY WORKERS TO UNIONIZE: A bill pre-filed by Del. Cathi Forbes, who represents the Towson area, and another cross-filed by Sen. Shelly Hettleman, who represents portions of northwest Baltimore County, would authorize the county library’s 578 part-time and full-time employees to form a union and collectively bargain, Taylor DeVille of the Towson Times reports.

METRO MULLS NOT ASKING STATES FOR MORE CASH: Newly cash-infused Metro has gone from an agency on the financial brink to cutting its funding partners a break, writes Justin George in the Post. Metro is proposing to forgo asking Metro’s main funders – including Maryland – for an increase in its annual subsidy commitments next fiscal year, according to a Metro plan released Monday.

‘MRS. O,’ GOV. O’MALLEY’s MOTHER, DIES: Barbara A. O’Malley, mother of the former governor of Maryland and a beloved Capitol Hill institution known as “Mrs. O” during her more than three-decade career as a member of Sen. Barbara A. Mikulski’s staff, died Wednesday at Stella Maris Hospice in Timonium. The former longtime Rockville resident was 93, Frederick Rasmussen of the Sun reports.