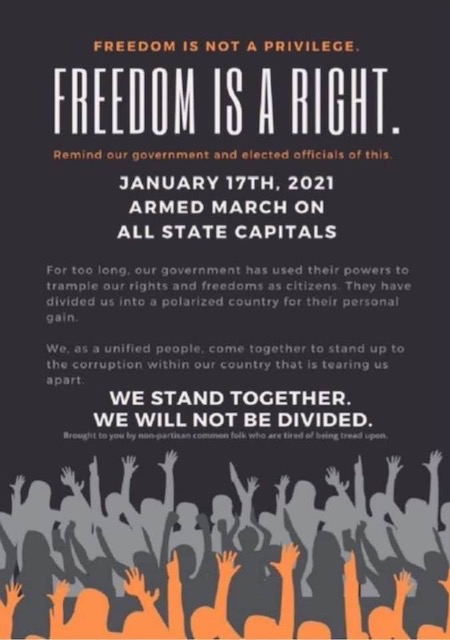 If armed protesters march on Maryland’s state capitol this Sunday the state’s law enforcement agencies will be ready to address the threat, according to a spokesperson for the Maryland State Police.

“The Maryland State Police is aware of on-line information regarding the possibility of armed demonstrations in state capitals on January 17. We remain in constant contact with our local, state, and federal law enforcement partners regarding any potential events with a criminal nexus in Annapolis. If such an event is scheduled, the Maryland State Police will work in support of the Maryland Capitol Police, Annapolis Police Department, Anne Arundel County Police, and other public safety agencies to ensure adequate law enforcement resources are available to address any violations of law,” Greg Shipley told MarylandReporter.com on Monday.

Shipley added: “In addition, Maryland State Police commanders remain in contact with law enforcement officials in Washington, D.C., regarding any assistance that may be required. We will continue to be prepared to assist there if needed.”

Gov. Larry Hogan said at a news conference on Monday morning that he is aware of the threat and that “additional security measures” will be implemented around state buildings in Annapolis.

“We are taking additional security measures here at the State House complex-both the Capitol Police and the Maryland State Police. I have a security team briefing later this afternoon, not only to talk about the situation in Maryland, but our additional assistance in Washington…I have a call this afternoon with [Virginia] Gov. [Ralph] Northam and [Washington D.C.] Mayor [Muriel] Bowser to talk about coordination in the region. We are setting up a meeting with the FBI.”

Since last Wednesday’s attack on the U.S. Capitol by supporters of President Donald Trump, there has been pervasive internet chatter by so-called “patriot” groups calling for an armed march this Sunday on all 50 U.S. state capitals.

House Democrats today are moving to again impeach Trump, whom they say egged on the Capitol rioters. Lawmakers on both sides of the aisle have called on the president to resign. Absent either scenario, Trump’s term in office will end on Jan. 20.

During Wednesday’s attack, dozens were arrested and five people were killed. The deaths include one female rioter and a U.S. Capitol Police officer.

Trump has yet to condemn the protests planned for Sunday.

Tearing down Patapsco River’s Union Dam is on board agenda

Diamonds are the ambassador’s best friends