LEADERS BATTLE HOGAN OVER BUSINESS LOAN: General Assembly leaders have no plans to schedule a vote on a $20 million loan the state promised Northrop Grumman, jeopardizing a plan to encourage the company to keep thousands of jobs in Maryland, Erin Cox reports in the Sun. The money is part of a controversial $37.5 million package marketed by the Hogan administration as a way to ensure the aerospace giant keeps jobs here and remains competitive with other defense contractors. The legislature approved the loan as part of the state budget in April, but it’s now mired in a fiscal fight between Republican Gov. Larry Hogan and top Democrats over money set aside for legislative priorities.

HOGAN, FROSH AGREE ON DIVERSITY LACK IN RX POT: Gov. Larry Hogan (R) and Attorney General Brian E. Frosh (D) have joined black state lawmakers in expressing dismay about the lack of diversity in Maryland’s burgeoning medical-marijuana industry, Fenit Nirappil reports in the Post. At the same time, the head of the Legislative Black Caucus is calling for legislation to ban elected officials from taking jobs in the industry. Del. Cheryl D. Glenn (D-Baltimore), who was instrumental in passing the bill that legalized medical marijuana, said she’s angry that another leader in that effort later joined a company seeking a license to grow, process and sell the drug, without publicly making clear his dual roles.

ONE FAMILY’S BUSINESS: Officials with medical cannabis producer Grow West MD LLC told a gathering Saturday that Garrett County will see economic expansion from the growing operation planned for the county. Following the announcement two weeks ago that Grow West had been awarded a stage one medical cannabis grower’s license, several members of the owners, the large Valois family of Frederick County, which has been in business for 40 years, attended the event.

IMPROVING FOSTER CARE FOR LGBT KIDS: Maryland officials are taking steps to create a more welcoming foster-care system for gay, bisexual and transgender children and adolescents, including screening homes for possible bias and providing sensitivity training to case workers, writes Fenit Nirappil for the Post. The policy directive issued this month by the state Department of Human Resources prohibits conversion therapy and urges foster parents of transgender children to call them by their preferred pronouns and to allow them to dress and groom accordingly.

EXPUNGEMENT EXPANSION: Don Aines of the Hagerstown Herald Mail reports that a change in the law that expands the number of criminal offenses that can be expunged is more than a year away from going into effect, but people whose criminal convictions are collecting a lot of dust can begin doing the mental math as to when they can apply to have their convictions removed from public records.

DHMH CONTEMPT CHARGE DISMISSED: Baltimore City Circuit Court judge dismissed Thursday contempt proceedings against the secretary of the Maryland Department of Health and Mental Hygiene related to three new cases in which inmates who were ordered into state mental health facilities instead were held in jails, reports Bryan Sears in the Daily Record.

CHARLES GETS DRUG TAKE-BACK PROGRAM: Josh Hicks of the Post reports that Lt. Gov. Boyd K. Rutherford on Friday announced a new “drug take-back” program in Charles County that the state will use to help combat its heroin and opioid epidemic in one of the hardest-hit jurisdictions. The goal is to prevent unneeded prescription drugs and needles from reaching addicts by allowing residents to dispose of the items in safe receptacles at six independent pharmacies in the county.

HOGAN SCORES WITH TRUMP-LIKE TONE: Political pundit Barry Rascovar writes in MarylandReporter.com that the yin and the yang of Gov. Larry Hogan keep bubbling to the surface. On the one hand, he’s made it clear he finds Republican presidential nominee Donald Trump offensive. On the other hand, Hogan continues to dip into Trump’s bag of tricks to win emotional points with voters.

DONATIONS TO BPD: Doug Donovan of the Sun takes a closer look at the charitable donations to the Baltimore Police Department that were used for airplane surveillance and recording.

PUBLIC DEFENDERS SEE DISCOVERY VIOLATIONS: Heather Cobun of the Daily Record writes that as Baltimore City Circuit Judge Barry Williams meted out sanctions for highly publicized discovery violations by prosecutors in the Freddie Gray cases, public defenders in the city were quick to point out that the violations were not rare missteps. But interviews with public defenders in Maryland’s largest jurisdictions show similar problems across the state.

VAN HOLLEN SAYS I-81 UPGRADES IMPORTANT: Tamela Baker of the Hagerstown Herald Mail reports that improving Interstate 81 is vital not just to Washington County, but to Maryland — and it should not be a partisan issue, according to U.S. Rep. Chris Van Hollen. Van Hollen, the Democratic nominee to succeed retiring U.S. Sen. Barbara Mikulski, made the comments in a wide-ranging interview with Herald-Mail Media Thursday during a swing through Frederick and Washington counties.

CITY COUNCIL CANDIDATE SUIT: Luke Broadwater of the Sun reports that in Baltimore’s 12th District, there’s a legal fight going on over which candidates will be on the ballot for November’s general election for City Council. Democrat Robert Stokes and Green Party candidate Ian Schlakman were already on the ballot following victories in their party primaries this spring. But two unaffiliated candidates — Frank W. Richardson and Dan Sparaco — also have joined after gathering hundreds of signatures from voters in the district. Sparaco’s addition has prompted a legal dispute.

ARON DROPS EFFORT: Ruthann Aron, a former Montgomery County Planning Board member and U.S. Senate candidate, ended Friday her legal efforts to have her name cleared in a notorious 1998 case in which she was accused of trying to hire a hitman to kill her husband and a Washington, D.C., attorney, Andrew Metcalf reports in Bethesda Beat. 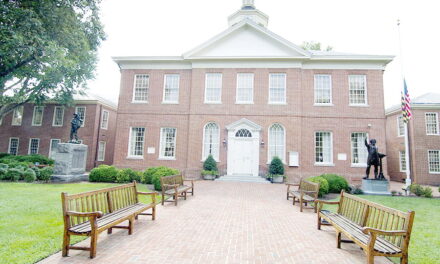