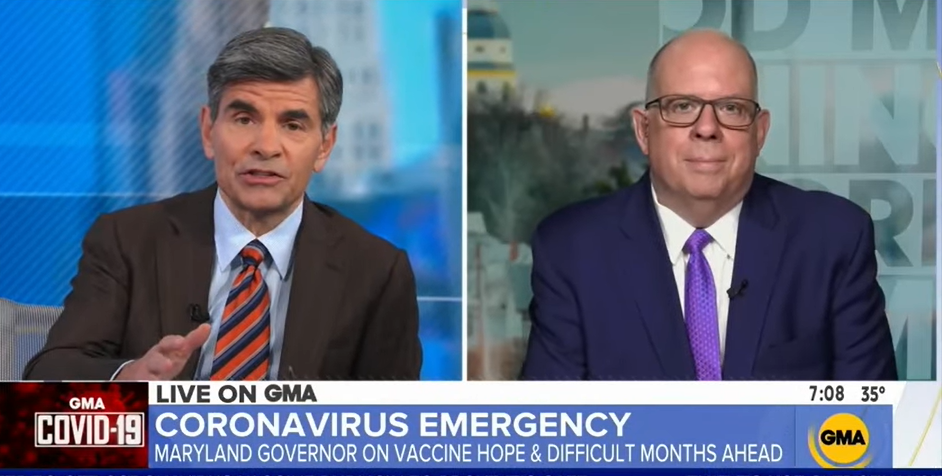 EMPLOYERS WILL FACE VACCINE DECISIONS: With a poll showing 42 percent of Americans do not plan to get a coronavirus vaccine, Bryan Renbaum of MarylandReporter.com speaks to experts  about whether employers could require that their employees be vaccinated.

HOGAN ON GMA: FIRST BATCH WON’T COVER HEALTHCARE WORKERS: Gov. Larry Hogan appeared on Good Morning America on Thursday to discuss the initial delivery of the COVID-19 vaccine to Maryland, Ava-joye Burnett reports for WJZ. The first batch could come in mid-December after FDA approval, but Gov. Larry Hogan said that will not be enough for the 300,000 frontline healthcare workers in the state. “Sadly, the darkest days are yet ahead,” he said.

GROUP FORMS TO PROTEST SMALL BUSINESS IMPACT OF COVID-19 RESTRICTIONS: Small businesses are banding together to protest that they are disproportionately affected by coronavirus restrictions, Steve Bohnel reports for The Frederick News-Post. A regional gym owner is leading the group of 1,000 small business owners.

BMORE MAYOR-ELECT HAS CLOSE CONTACT WITH COVID CASE: Less than a week before his swearing in, Baltimore Mayor-elect Brandon Scott has announced he is in quarantine due to close contact with a positive case, WBAL TV reports. Scott has tested negative and feels fine, but will remain isolated as long as public health officials advise.

A CITY VERSION OF DLS? Baltimore City’s Mosby wants to add a new office to his staff modeled after the state’s Department of Legislative Services, Tim Prudente and Emily Opilo report for the Sun. The team of nine analysts would cost $700,000 and increase his staff to 37, putting him at odds with the mayor-elect at a time when the city is laying off 68 workers.

DIFFICULT DAYS AHEAD: Declaring there’s one final battle to fight against the novel coronavirus, Frederick County Executive Jan Gardner warned of difficult weeks and months ahead with most of the key COVID-19 metrics spiking, Greg Swatek reports for The Frederick News-Post. “We know that this December won’t be like any we have experienced before,” Gardner said.

MOCO REEXIMANING SCHOOL REOPENING BENCHMARKS: Montgomery County Board of Education voted to delay its reopening plans in order to reevaluate the metrics that trigger an end to in-person learning, Caitlynn Peetz reports for Bethesda Beat. “If (a case rate per 100,000 people) under 15 is what (the state and federal government) are recommending, could we be a little more aggressive in bringing kids back sooner?” Board Vice President Karla Silvestre asked.

FALLEN JOURNALIST MEMORIAL: Congress has approved the building of a national memorial to fallen journalists on federal land in the nation’s capital, Neal Augenstein reports for WTOP. The legislation, sponsored by Sen. Ben Cardin, comes two years after a gunman killed five people in the newsroom of the Capital Gazette in Annapolis.

METRO PLANS LAYOFFS: Metro is preparing to lay off over 1,000 workers in Virginia and Maryland as it faces a shortfall from a steep ridership drop during the pandemic, Jonathan Capriel reports for the Washington Business Journal.

ICYMI: MILLER RESIGNATION OFFICIAL: Del. Warren Miller, R-Carroll and Howard, has officially announced his resignation and plans to focus on his role as director of business development for technology company Akima, reports Ana Faguy for Baltimore Sun Media. The story adds a few details not in Maryland Reporter’s story Monday.

HOWARD HALTS SNOW DAY CANCELLATIONS: Snow days may be a thing of the past in Howard County, WBAL TV reports. The public schools have decided snow days or inclement weather will trigger a switch to fully virtual learning to minimize disruptions to scheduling.