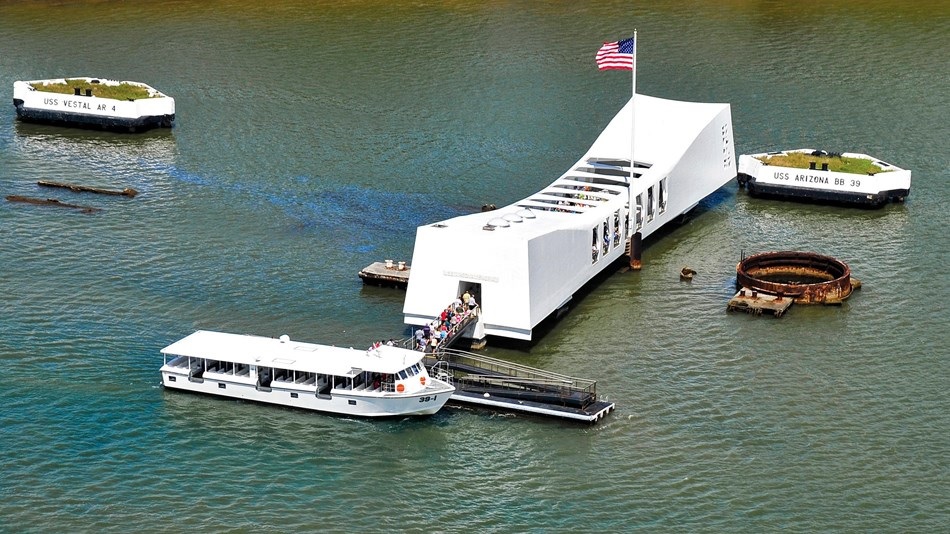 The memorial to the USS Arizona at Pearl Harbor, Hawaii sits over the ship sunk during the Japanese attack on Dec. 7, 1941. National Park Service photo.

VACCINE RATION WON’T COVER HIGHEST PRIORITIES: While Maryland and Virginia will receive far more doses of Covid-19 vaccine than tiny D.C., governors in those states have said their allotments also will not cover everyone in the highest priority groups, Laura Olsen of Maryland Matters reports. Maryland Gov. Larry Hogan has said the state is expected to receive a first batch of about 155,000 doses, which would cover only about half of the state’s frontline health care workers. Virginia is poised to receive around 70,000 doses.

MARYLAND HOSPITALS PRACTICE PATIENT SHARING: Erin Cox of the Post writes about the unique cooperation that hospitals are undertaking to treat the rising number of Covid patients. “When a middle-aged man with covid-19 arrived at a Western Maryland emergency room last week, the hospital had all the expertise and none of the space to treat him. … After a single phone call, he was taken 125 miles from Cumberland to Suburban Hospital in Bethesda, a transfer between hospitals that normally don’t coordinate.”

STATE PROCUREMENT CHIEF SAYS HE WAS FORCED TO RETIRE: The former head of procurement for the Maryland Department of Health said he was forced into retirement without explanation, months after refusing an unusual late-night request to send millions of dollars to a South Korean COVID-19 test-kit manufacturer, Bruce DePuyt of Maryland Matters reports. He also raised concerns about whether the state followed best practices in its rush to acquire the tests last spring.

TENUOUS, TRICKY PPE MARKET: 60 Minutes’ Lesley Stahl does a segment on PPE and highlights several state’s – including Maryland’s – expensive purchase of goods through Blue Flame Medical, whose president is John Thomas. He and his partner, Mike Gula, were Republican strategists who jumped into the business as COVID hit, despite having zero experience in importing medical supplies. Tiffany Waddell, a Republican advisor to the governor of Maryland, called herself a “good friend” of Gula and vouched for Blue Flame, that led Maryland to order a million and a half masks and 110 ventilators.

RURAL AREAS CONTINUE TO REPORT HIGHER COVID RATES: Maryland reported 2,643 new cases of the coronavirus and 26 more deaths Sunday as the state’s rural jurisdictions continue to report higher rates of infection than the rest of the state, Phil Davis of the Sun reports. Sunday’s additions bring the state’s total to 215,027 cases of COVID-19, the illness caused by the virus, and 4,685 people who have died due to the disease or complications from it since officials began tracking the virus in March.

SOME PANDEMIC ELECTION CHANGES MAY STAY: Future elections in Maryland could look a lot like 2020. The coronavirus pandemic altered life in a number of ways, including how Maryland conducts elections, forcing long-debated changes to be made in order to protect public health. A number of those changes are being viewed as successes, reports Bryan Sears for the Daily Record.

GBMC HIT WITH RANSOMWARE ATTACK: The Greater Baltimore Medical Center announced late Sunday night that a ransomware attack led to their information technology systems being shut down, WBFF-TV is reporting.

GUN SALES UP: Dan Hartman is seeing lots of new faces in his Carroll County gun store this year. He attributes the increase to the uncertainty people feel about COVID-19, frequent protests in major cities and the prospect of President-elect Joe Biden, a gun control advocate, in the White House, Ben Leonard of the Sun reports.

OPINION: SAY NO TO NEW TAXES: Saying that now is not the time for new taxes, state Sen. Justin Ready, in a column for the Carroll County Times, urges against the revival of House Bill 732, which Gov. Larry Hogan vetoed after it was passed by the General Assembly as it was going into Covid shutdown last year.

HOUSE CHAMBER DIVIDED FOR SAFETY: The Maryland House of Delegates floor is usually a tight squeeze, with 141 members packed nearly shoulder-to-shoulder in the chamber. Not so in 2021. To safely convene during the COVID-19 pandemic, House leaders have divided the chamber into two groups: with 71 members meeting in the House chamber and 70 in a Chamber Annex constructed out of two delegation rooms in the House Office Building, Danielle Gaines of Maryland Matters reports.

BLACK DELEGATES TO LEAD ARUNDEL DELEGATION: For the first time in history, two Black Anne Arundel lawmakers will lead the county delegation at the State House, Oliva Sanchez reports in the Capital Gazette. Maryland City’s Del. Sandy Bartlett will be the first Black person to serve as chair of the Anne Arundel County delegation in the House starting in the 2021 session next month. She will be joined by Del. Mike Rogers, D-Laurel, the first Black person to serve as vice chair.

VULNERABILITIES FOUND IN MOST MD SCHOOL SYSTEMS: Experts say cyber attacks on public school systems are on the rise around the country. Just days after the Baltimore County attack, schools in Huntsville, Ala., were also shut down by a ransomware incident. In the last six years, state audits routinely have identified cybersecurity vulnerabilities in most of Maryland’s 24 school systems, Lillian Reed, Alison Knezevich and Liz Bowie of the Sun report.

REMOVING LEE STATUE UP FOR U.S. HOUSE VOTE: A proposal to remove a controversial statue of Confederate Gen. Robert E. Lee at Antietam National Battlefield is expected to be up for a vote this week in the U.S. House of Representatives, according to a spokeswoman for Rep. David Trone, Dave McMillion of the Hagerstown Herald-Mail reports.

HARRIS, HOYER DONATE TO GEORGIA SENATE CAMPAIGNS: Two Maryland lawmakers – Democratic House Minority Leader Steny Hoyer and Republican U.S. Rep. Andy Harris — have contributed to candidates in the Georgia elections that will decide control of the U.S. Senate, Jeff Barker reports in the Sun. A third Marylander, Kimberly Klacik, said Friday that she planned to donate to both Georgia Republicans on the ballot and was headed to that state this weekend to rally GOP supporters.

ALMOST $1M REMAINS IN KLACIK COFFERS: Kimberly Klacik, the Maryland Republican congressional candidate who won nationwide attention with her provocative campaign videos and endorsement from President Trump, raised almost $8.3 million for her longshot campaign, Josh Kurtz reports for Maryland Matters. Klacik, who took just 28% of the vote in the 7th District race against Rep. Kweisi Mfume (D), still had $977,101 in her campaign account as of Nov. 23.

MARYLAND CERTIFIES ELECTION FOR BIDEN: Maryland officials have certified election results showing Democrat Joe Biden won the state’s 10 electoral votes, the AP is reporting. Maryland’s Board of State Canvassers on Friday approved a declaration of results during a meeting held remotely because of the coronavirus pandemic.

IN ARUNDEL, BIDEN MARGIN BEATS CLINTON MARGIN: Data from the Anne Arundel Board of Elections show nearly 40,000 more county residents cast ballots than in 2016. In what some political scientists qualified as a forceful rejection of President Donald Trump, Anne Arundel County voters chose now President-elect Joe Biden by a margin of 45,000 votes compared to the margin of 6,000 votes Hillary Clinton won the county by four years ago, Olivia Sanchez reports for the Capital Gazette.

SCOTT TO BE SWORN IN AS B’MORE MAYOR: When Baltimore City Council President Brandon Scott (D) becomes this city’s 52nd mayor Tuesday, there will be no major celebratory events. Lavish inaugural galas were once the norm at the Baltimore Convention Center. Today, the huge complex has been converted into a field hospital for recovering COVID-19 patients, reports John Rydell for Maryland Matters.

SYMPTOM-LESS MAYOR-ELECT QUARANTINED: Baltimore City Council President and Mayor-elect Brandon Scott was self-quarantining after being exposed to the coronavirus. Scott, 36, said in an interview Friday that he has never had any COVID-19 symptoms, and has tested negative repeatedly — including again Friday, McKenna Oxenden and Emily Opilo report in the Sun.

MARY PAT CLARKE, LONG TIME CITY COUNCILWOMAN, TO RETIRE: On Dec. 10, Mary Pat Clarke will leave the Baltimore City Council after one of the longest tenures of any one on the city’s legislative body: 32 years, spread over 45 years, including two terms as its president and the first woman elected to that post, Jean Marbella of the Sun reports.

FORMER SEN. PAUL SARBANES, 87, DIES: Paul S. Sarbanes, a low-key son of Greek immigrants who fiercely protected the Chesapeake Bay and other Maryland interests during 30 years in the U.S. Senate, died Sunday night, according to his son. He was 87, Jeff Barker of the Sun reports.