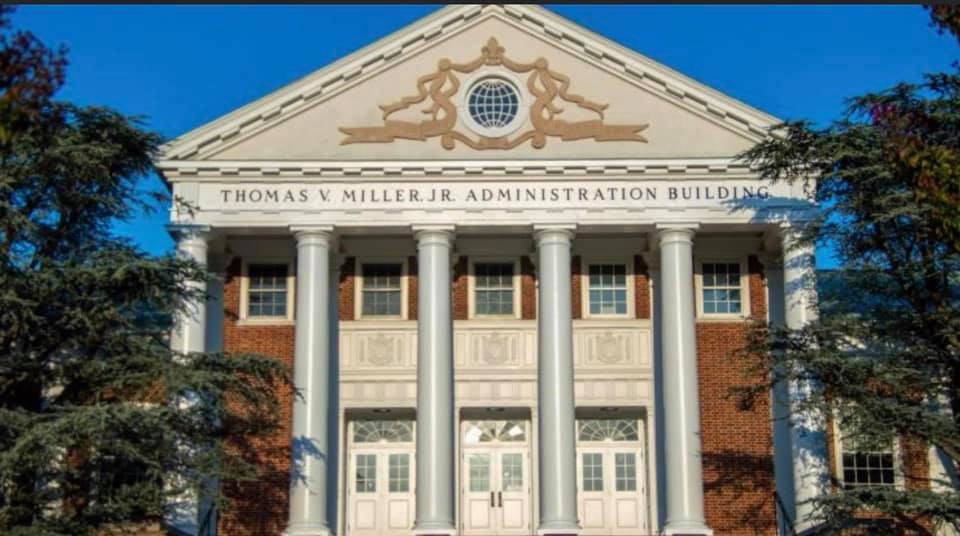 The newly renamed administration building at the University of Maryland College Park for its alumnus, the former president of the Maryland Senate, Mike Miller. Photo from Melanie Miller Facebook page.

POLL: MARYLANDERS DISTRUST POSSIBLE COVID VACCINE: Fewer than half of Maryland residents would agree to get a COVID-19 vaccine when one becomes available, new Goucher College Poll results show. Madeleine O’Neill of the USA Today Network reports that the statewide poll is just the latest sign of faltering public trust in a potential COVID-19 vaccine. It mirrors recent national polling that has found just 50% of Americans say they intend to get the vaccine when it becomes available.

POLL: HOGAN SCORES HIGH ON COVID MANAGEMENT: The majority of Maryland residents approve of how Gov. Larry Hogan has handled the coronavirus outbreak in the state, according to the Goucher College Poll released Tuesday writes Talia Richman in the Sun. It found that 82% of survey respondents approve of the way the Republican governor has taken on the pandemic, with half those saying they strongly approve of Hogan’s response.

COVID CAUSING FINANCIAL STRAIN TO HALF OF MARYLANDERS: Nearly half of all Marylanders have experienced financial hardship since the onset of the COVID-19 pandemic, and people remain concerned that they or a loved one will get sick, Bruce DePuyt reports for Maryland Matters in another results of the Goucher poll.

THIAM: GOP NEEDS TO SHED IMAGE OF ‘OLD WHITE MEN:’ The GOP has to shed its image as a party of “old white men” if it wishes to make inroads in the African-American community, according to the first Black Republican woman to serve in the Maryland General Assembly. “These are my friends’ perception of the Republican Party,” Del. Brenda Thiam told Bryan Renbaum for MarylandReporter.com.

ANTHONY CHALLENGES SARBANES AGAIN: Olivia Sanchez of the Capital Gazette profiles retired Lt. Col. Charles Anthony, a Silver Spring Republican, who is making another run against Democratic Rep. John Sarbanes in the 3rd Congressional District. It’s a steep hill to climb for Anthony. Sarbanes won in 2018 with more than 202,000 votes, or 69% of the vote when the same pair faced off. Anthony received about 82,000 votes or 28% of the vote.

STATE OFFICIAL TAKE OVER SOME PURPLE LINE CONTRACTS: Maryland transportation officials have taken over some contracts for the light rail Purple Line, with work scheduled to resume this week, Dan Schere reports for Bethesda Beat. The Purple Line, a 16-mile, 21-station light-rail line connecting Bethesda to New Carrollton, has been plagued by cost overruns, delays and lawsuits throughout the construction process.

OPINION: RETURNING TO SCHOOL A WIN: Anne Arundel kids are headed back to classrooms in November. That’s a win for children, parents, and science over the teachers union, the Pittman administration, and politics. It should’ve happened in September, contends former delegate Herb McMillan in a column for Eye on Annapolis.

ST. MARY’S OPEN MEETING ACT MAY BE AXED: The four state legislators for St. Mary’s joined the county commissioners last week to discuss 13 law proposals for review before the General Assembly’s 2020 session, including the deletion of the St. Mary’s County Open Meetings Act. Last year, legislation passed allowing more topics to be discussed in closed sessions and adding the St. Mary’s County Metropolitan Commission, the housing authority and the public library board to the list of public agencies that must abide by the act, as well as legislation encouraging the use of new technology, Madison Bateman reports for Southern Maryland News.

SCOTT POLL: 2/3 OF CITY VOTERS BACK HIM: Brandon Scott, Baltimore’s Democratic nominee for mayor, has nearly two-thirds of likely voters’ support, according to a poll commissioned by Scott. The poll asked voters both where they stand in November’s general election race and what priorities they want the next mayor to tackle, Emily Sullivan of WYPR-FM reports.

HISTORICAL BLACK COMMUNITY FEELS THREATENED BY HOUSING PLAN: Residents of an historically African American neighborhood in East Towson are lobbying against plans for an affordable housing development. Those descendants of slaves who once labored at Hampton Mansion in Baltimore County, fear the project threatens the existence of their neighborhood, John Lee reports for WYPR-FM.