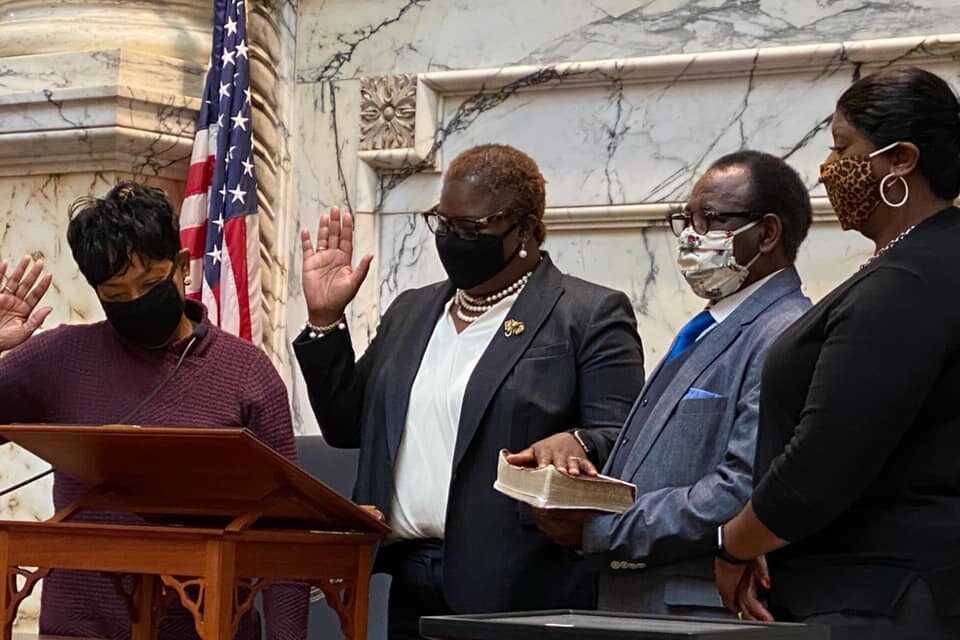 House Speaker Adrienne Jones, far left, swears in Brenda Thiam of Hagerstown as the newest member of the House of Delegates and the first Black Republican woman to serve in the Maryland legislature. Photo from House Republican Caucus on Facebook.

The GOP has to shed its image as a party of “old white men” if it wishes to make inroads in the African-American community, according to the first Black Republican woman to serve in the Maryland General Assembly.

Thiam said she was a Democrat until 2012 at which point the party “no longer aligned” with her “core beliefs” and she became a Republican. Thiam said over the past five years “more and more African-Americans” have joined the ranks of the GOP. “We’ve just got to be a presence…spreading the agenda and informing people that Republican Party is inclusive,” she said. “It embraces all diversities.”

Thiam predicted that President Donald Trump, who received about 8% of the African-American vote in 2016, will do significantly better with that constituency in next month’s election.

“I’m hoping he’ll do fantastic. I feel the numbers are going to be better than the 2016 election. I know personally, a few people in my small circle, who have changed their party affiliation from Democrat to Republican-who are African-Americans. So that’s just in my small circle. So I know that there are many-many people more people- as you see on Facebook-who are walking away from the Democratic Party and joining the Republican Party because President Trump has remained true to the promises he made during his campaign.”

“I do think maybe we are going to see a doubling of support in the community which could obviously be very big.”

Ehrlich said claims by media pundits that Trump is racist are unlikely to register with Black voters this time around because the president’s record speaks for itself.

“The difference has been his record. And in that sense it’s really easy to understand.”

Sen. Jill Carter (D-Baltimore City) disagreed, saying Trump has not kept his promises to the African-American community and that his support among Blacks is unlikely to increase.

“He claimed in 2016 he would offer a ‘new deal for Black America.’ That certainly hasn’t happened. Black America is not monolithic but we are relatively united in opposition to Trump…The minuscule number of blind loyalists will remain relatively unchanged. The rest of us believe the Trump that told racists to ‘stand back and stand by’ when it comes to police killing us with impunity and zero tolerance for the resistance. Overwhelmingly, Black America rejects Trump. I’ve never before seen such a consensus. ”

Thiam, 51, a veteran special educator and recent candidate for the Hagerstown City Council, was sworn-in as a member of the House Delegates last week. She was appointed to that position by Gov. Larry Hogan on Sep. 23 to fill the vacancy created by the elevation of Del. Paul Corderman (R) to the Senate. Corderman’s ascension to the upper chamber followed the August resignation of Sen. Andrew Serafini (R). Serafini served in the Senate for five-and-a-half years. Thiam will assume Corderman’s seat on the House Appropriations Committee. Lawmakers are slated to return to Annapolis on Jan. 13, 2021.

Thiam said she looks forward to working with lawmakers on both sides of the aisle.

“I know I’m going to have to come in and form some relationships and get to know people on both sides of the aisle…I see that really as a priority. Really to just get to know everyone and start building those relationships to help us make good decisions for all of Maryland.”

Maryland GOP State Chairman Dirk Haire said in a statement to MarylandReporter.com that the party is making inroads with Black voters all across the state through the recruitment and support of African-American Republican candidates and elected officials.

“The State GOP believes that recruiting and supporting Black candidates such as Bowie City Councilwoman Roxy Ndebumadu and Delegate Brenda Thiam is helping us make inroads with Black voters. We have a vibrant Maryland Black Republican Council, led by our Charles County GOP Chairwoman Nicole Bennett.  And in Baltimore this year we have the most Black Republicans running for city office of any major city in the United States, led by our mayoral candidate and Baltimore City GOP Chairwoman Shannon Wright.”

Judges will contribute more to their pensions