KEY COVID STATS FLAT, BUT DEATHS RISE: The rate of coronavirus hospitalizations in Maryland and the rate of intensive-care admissions — the two statistics state officials are tracking most closely as they consider when to begin reopening the state — were both roughly flat again Monday. But the COVID-19 pandemic continues to ravage Maryland, and the number of deaths increased by 34 from the day before, to a total of 1,216 across the state, Colin Campbell of the Sun reports.

LAWMAKERS SEEK MORE OVERSIGHT ON COVID CONTRACTS: After Maryland officials terminated a contract with a politically connected firm, state lawmakers are calling for greater oversight of the millions of dollars the Hogan administration is awarding to companies through emergency purchases during the pandemic, Luke Broadwater and Pamela Wood of the Sun report. 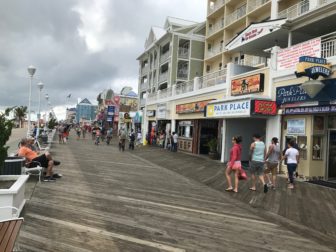 OCEAN CITY TO REOPEN BEACH, BOARDWALK: Ocean City is planning to reopen its beach and boardwalk Saturday to take a “baby step” toward returning the town to a new normal during the coronavirus, according to a city council member, McKenna Oxeden of the Sun reports.

HOGAN IS CHALLENGED BY HIS OWN PARTY: Gov. Larry Hogan is under fire from some fellow Republicans – including Del. Dan Cox – who claim the governor is overstepping his bounds when it comes to executive orders imposed to mitigate the spread of COVID-19, Tom Baden of the Daily Record reports.

COVID FUNDS SOON TO BE RELEASED TO SMALL COUNTIES: It took weeks of prodding, but Maryland’s small counties will soon begin receiving federal COVID-19 funds from the state, Bruce DePuyt of Maryland Matters reports. David Brinkley, Secretary of the Department of Management and Budget, informed county leaders of the Hogan administration’s decision to release the funds on Monday afternoon.

LOCAL JURISDICTIONS SEEK MORE FEDERAL AID: The city of Baltimore and Maryland’s largest counties say they are reeling from the budgetary effects of the coronavirus pandemic and are urging increased federal aid, Jeff Barker of the Sun writes. “We know all of you are experiencing incredible pressure on your budgets,” U.S. Sen. Chris Van Hollen said during a conference call Monday that included Baltimore’s mayor and the county executives of Anne Arundel, Howard, Montgomery and Baltimore counties.

OAKS SEEKS RELEASE FROM PRISON: Former state Sen. Nathaniel Oaks (D-Baltimore City) on Monday petitioned a federal judge for compassionate release from his 42-month prison sentence, citing the novel coronavirus. Oaks – who was sentenced in July 2018 to 3 1/2 years in federal prison for taking $15,300 in bribes from an FBI undercover source in a political corruption probe – wrote a hand-written motion for compassionate release, which he filed in U.S. District Court on Monday, Danielle Gaines reports for Maryland Matters.

RECOVERED COVID-19 PATIENT DONATING PLASMA: Jon Kelvey of the Carroll County Times writes about one man who recovered from COVID-19 and is donating his blood so that plasma could be extracted from it and used to help others recover. It’s a method of providing instant immunity to patients, according to LifeBridge Health Chief Innovation Officer Dr. Daniel Durand.

MFUME TO BE SWORN INTO CONGRESS TODAY: Kweisi Mfume is getting sworn into Congress today by House Speaker Nancy Pelosi for the State’s 7th district, WBFF-TV is reporting.

SUN WINS PULITZER FOR PUGH’S ‘HEALTHY HOLLY’ DOWNFALL: The Baltimore Sun won the Pulitzer Prize for local reporting Monday for the staff’s work uncovering the “Healthy Holly” book-publishing scheme that led to the resignation of Mayor Catherine Pugh and contributed to her federal conviction on fraud and other charges, Jean Marbella of the Sun reports.