BLACK CAUCUS HOLDS HEARING: Discriminatory policing in Baltimore City and the racial disparity in Maryland’s nascent medical marijuana industry are the two top issues that will be addressed during a hearing today sponsored by the Maryland Legislative Black Caucus, reports Ovetta Wiggins in the Post. The daylong hearing in Annapolis is the first of its kind for the legislative group. 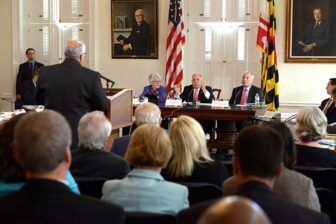 STATE MULLS NIXING WELLS FARGO: Maryland might move away from its banking relationship with Wells Fargo following a scandal in which the bank was fined $185 million for opening unauthorized accounts, writes Bryan Sears for the Daily Record. State Treasurer Nancy K. Kopp on Wednesday said a number of state agencies have accounts with Wells Fargo, which they will be allowed to keep at least in the near term.

HOGAN TAKES CABINET ON ROAD: Gov. Larry Hogan is coming to Washington County next week — and he is bringing his Cabinet with him. The Hogan administration will conduct a public Cabinet meeting at 10 a.m. Oct. 13 at the Maryland Theatre in downtown Hagerstown, according to a tentative schedule compiled by the governor’s office, Tamela Baker reports for the Hagerstown Herald Mail.

PUBLIC CAMPAIGN FUNDING: There’s no question that the choice for president is the top issue on the November ballot — as bad as those choices seem to many voters, writes Len Lazarick for MarylandReporter.com. But there are good government issues on the ballot as well, in addition to choosing a U.S. senator and challenges to incumbent congressmen. Question A on the Howard County ballot is actually getting statewide attention and even some national notice, as it seeks to establish public funding of campaigns for local offices.

VP DEBATE A TIE: In MarylandReporter.com, Professor Richard Vatz scores the debate a tie. The key to the debate was that throughout, Kaine could not defend his presidential nominee from all of the accusations that Trump never was able to make in their last debate but that Pence made. Pence not only couldn’t defend Trump on his erratic rhetoric, but he simply denied that Trump had said things that he had said.

ELECTION RUNOFFS: Aberdeen city officials are moving closer to adopting a charter amendment providing for a runoff when there are ties in future elections for mayor or city council seats. Allan Vought of the Aegis writes that the City Council members and Mayor Patrick McGrady briefly discussed a draft amendment during an hour-long work session at City Hall Monday evening, two days after a new state law took effect Saturday requiring municipalities to “fill a vacancy that resulted in a tie vote in an election for municipal election within 90 days after the election.”

HOGAN ALL OVER MIDGE PROBLEM: It’s not one of the 10 plagues of Egypt, but a “massive infestation” of tiny flies is drawing complaints from businesses and residents of Eastern Baltimore County and has Gov. Larry Hogan ready to open the state checkbook, reports Bryan Sears for the Daily Record.

ENCOURAGING MEDICAL INNOVATION: John Colmers of the Health Services Cost Review Commission writes in an op-ed for the Sun that nearly three years ago, Maryland embarked on a noble experiment to simultaneously hold down the cost of health care while improving quality and the patient experience. Building upon Maryland’s 40-year history of innovation in health care financing, this new agreement with the federal government has created a platform for hospitals to partner in new ways with each other, with other providers and with the communities they serve. Although performance in the first two full years operating under this new “waiver” has been positive, there are particular concerns facing Maryland’s academic health systems that should be addressed.

MO CO ANTI-TERM LIMIT CAMPAIGN: The campaign to defeat a term-limits amendment in Montgomery County doesn’t have to report its contributors until Oct. 14. But four of the County Council’s nine members say they have given money to the effort, and a fifth says he plans to do so, writes Bill Turque in the Post. If Question B is approved by voters, council members and the county executive would be barred from serving more than three terms.

HOGAN UP, GOP DOWN: Gov. Larry Hogan continues to earn high marks from Marylanders, including for his outspoken disavowal of GOP presidential nominee Donald Trump, according to a new Washington Post-University of Maryland poll. But Hogan’s party is viewed more negatively than it was a year ago in the heavily Democratic state, where Trump is overwhelmingly unpopular, Ovetta Wiggins and Scott Clement report for the Post.

STATE WOULD OWN FREDERICK CENTER: A state agency, not a private development company, would own the conference center portion of the proposed downtown Frederick hotel project under a new draft memorandum of understanding between project partners. The new agreement outlining funding, ownership and operations of the roughly $84 million project was presented on Wednesday to the mayor and Board of Aldermen for review and discussion, Nancy Lavin of the Frederick News Post reports.