Public funding of county campaigns on the Howard ballot

This is an updated version of a column that appears in the October issue of The Business Monthly circulating in Howard and Anne Arundel counties this week.

There’s no question that the choice for president is the top issue on the November ballot — as bad as those choices seem to many voters.

But there are good government issues on the ballot as well, in addition to choosing a U.S. senator and challenges to incumbent congressmen.

Question A on the Howard County ballot is actually getting statewide attention and even some national notice, as it seeks to establish public funding of campaigns for local offices.

Ben Cohen, the Ben of Ben & Jerry’s Ice Cream, was in Columbia last week to promote a cause he embraced years ago. “He launched his own nonprofit on the issue a number of years back and has travelled the country supporting initiatives to get big money out of politics,” said Taylor Smith-Hams, an organizer for the effort to pass Question A.

Question A asks Howard County voters to approve a charter amendment. It would require the county council to pass legislation that would set up a system where candidates would get matching funds from a county fund — once they raise enough small contributions and swear off large contributions from individuals and corporations.

Cohen told the rally in a Columbia home that “More and more municipalities like yours are voting for small donor matches which is a way to amplify the voices of regular people so politicians listen to them and not just the giant, big money donors. This has proven to be real successful in New York City which also passed a small donor match and it totally changed the face of the city council in New York.”

How it would work 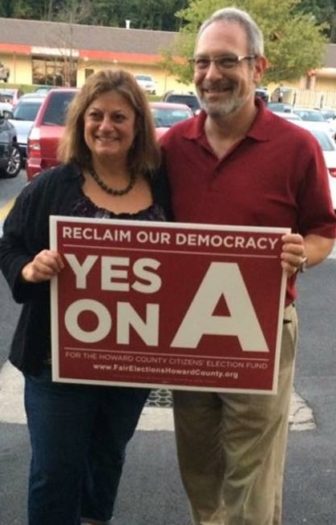 That’s how council members Jon Weinstein and Jen Terrasa, who sponsored the original legislation, hope the bill would work.

The Montgomery County Council has already passed similar legislation that will be in effect in 2018, but that did not need voter approval. In Howard County, the sponsors found that, without a charter amendment, they could not create a permanent, long-term fund for campaigns without amending the county charter, which requires an OK from voters.

Under their proposal and as recommended by the coalition of groups backing it, an independent commission would make funding recommendations to the county executive and county council for annual appropriations to ensure the program is fully functional for qualifying candidates in the 2022 election cycle.

Voters would also be allowed to make a check-off on their local income taxes to fund the program, with the rest of the money coming out of the county budget. A mid-September rally in Ellicott City brought out more than 100 people pledging to work on the campaign, and some big Democratic supporters.

“We’ve got to win this initiative,” said Sen. Ben Cardin, whose second term is up in 2018. “The integrity of the election system is at stake. With the current way campaign funds are raised, we can tell you how corrupting it is.”

Congressman John Sarbanes has been pushing for a public financing system for the House of Representatives for years, without making much headway.

“Momentum is building at the grassroots level,” he said. “This is the solution people have been waiting for.”

“I can’t be more excited,” Sarbanes said. “You’re the change I’ve been waiting for.”

How excited is the congressman? “We’re [going to] win here, and when we win here, my head is going to explode,” he said — a promise that may draw some reluctant citizens to vote for the measure.

First time on the ballot

What’s unusual about the Howard County ballot measure, supporters say, is that this is the first time public financing of local campaigns is being put up for referendum all by itself anywhere in the country.

“It’s sending a clear message through the country,” Larry Stafford, executive director of Progressive Maryland, told the ice cream rally. “You all are making history.”

“We take a risk by putting this on the ballot alone,” Weinstein said.

If passed, the legislation implementing it would go through the usual process. The county council would pass the bill and send it to County Executive Allan Kittleman, who could sign or veto it; if he didn’t like the measure, it would need four of the five council members to override his veto.

That’s how the charter amendment passed last spring. The council’s four Democrats voted for the public campaign financing, while Republican member Greg Fox did not, calling it a government handout.

The coalition of organizations supporting the bill includes Common Cause Maryland, whose executive director is treasurer of the campaign committee, Progressive Maryland, Maryland PIRG, the Maryland League of Conservation Voters, Democracy Initiative Education Fund and Every Voice

Supporters of the public funding concede this is less than is currently spent on competitive races for these offices. “[The] goal is not to ensure a candidate using matching can outspend all competitors; [the] goal is to stay competitive with enough funding to get the message out,” says the outline for the proposal.

It is worth noting that Republican Gov. Larry Hogan won in 2014 with $2.6 million in public funding of his general election campaign. He was outspent, three-to-one, by Anthony Brown, the losing Democrat.

The other good government measure on the ballot is a state constitutional amendment calling for special elections to replace the Maryland attorney general or comptroller if the posts become vacant early in their four-year terms.

This situation has not arisen in decades, but the Maryland Constitution has a general aversion to special elections.

CLARIFICATION 10/6/2016, 11:30 a.m. Under Question 1, the only proposed constitutional change on the ballot, the governor would appoint a replacement of the same party. (Unlike legislative appointments, he doesn’t have to appoint from same party now.) But that person would not automatically serve the rest of the term, as currently provided, if the vacancy occurred in the first 12 to 14 months of the term. There would be a special election in the presidential election year to fill the job.

The only other special elections in Maryland when a position becomes vacant are for the U.S. House of Representatives and U.S. Senate. For the House, the U.S. Constitution requires that the post can only be filled by election, since the members of the House represent the people directly. For the U.S. Senate, the governor appoints an interim senator until the next federal election.

Some counties do have special elections for county council when the posts become vacant.