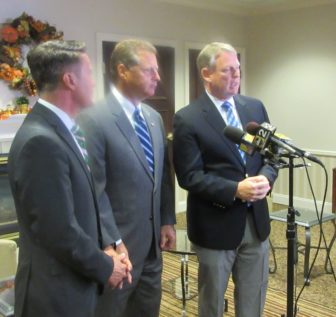 FIGHTING OPIOID EPIDEMIC:  Local and state officials called for a collaborative strategy to battle an opioid epidemic sweeping the state across jurisdictional lines at a summit organized by leaders of Anne Arundel, Harford and Howard counties Tuesday. Fatimah Waseem of the Howard County Times reports that despite recent statewide efforts to fund prevention and treatment, Anne Arundel County Executive Steve Schuh said the surge in opioid-related deaths clearly shows those efforts are “not working.”

LAWMAKERS URGE HALT TO RX POT PROGRAM: A group of Maryland lawmakers met with medical marijuana regulators on Tuesday and urged them to halt the program until a dispute over racial diversity in the burgeoning industry is resolved, Fenit Nirappil of the Post is reporting. But officials with the Maryland Medical Cannabis Commission retorted that they are wary of additional delays in making the drug available to patients, according to a lawmaker and commission staffer present at the meeting.

I-270 BUSWAY FUNDING: Gov. Larry Hogan (R) has postponed funding a busway in the heavily congested Interstate 270 corridor for at least six years, significantly delaying a transit project that Montgomery County is relying on to develop the upcounty without making traffic worse, Katherine Shaver of the Post reports.

CITY SEEKS STATE FUNDS FOR COPS: Baltimore City Mayor Stephanie Rawlings-Blake is asking the state for more than $30 million to pay for staffing increases, new technology and other investments in the Baltimore Police Department that the city expects will be mandated under a pending consent decree with the U.S. Department of Justice. Kevin Rector of the Sun writes that the requests, put to Gov. Larry Hogan in a letter made public Tuesday, break with a previous statement by Rawlings-Blake that the city would not look to the state or federal government to pick up the tab.

ENDING BULLYING IN STATE AGENCIES: The lead sponsor of a state employee anti-bullying bill said a hearing on the matter won’t go far enough and will not likely lead to an effective resolution, reports Bryan Sears in the Daily Record. Sen. C. Anthony Muse, D-Prince George’s and co-chair of the Joint Committee on Fair Practices and State Personnel Oversight, said he believes that a meeting of that committee Wednesday will be too reliant on discussions with state agency officials rather than listening to aggrieved employees to determine the scope of alleged bullying of some state workers.

FIRM CHALLENGES STATE ORDER: Everest Wealth Management Inc., the Towson firm known for its “Money Guys” infomercials, is challenging an order by the Maryland Insurance Administration to strip owner Philip Rousseaux and others at the firm of their investment adviser license, Sarah Gantz writes in the Sun. The order, issued last December, followed an investigation by the MIA that found Everest had used misleading information in its infomercials and blurred the line between the insurance company Everest Wealth Management and its related advisory services. The order also calls for Rousseaux and Everest to pay $62,400 in fines.

LOTTERY BIZ PROTESTS GAMING CHIEF: A company already protesting the Maryland lottery’s recommendation on a $262 million contract has filed a second protest specifically aimed at the lottery director, according to an AP story by Brian Witte in the Daily Record. IGT Global Solutions Corp., in a supplemental protest letter obtained Tuesday by the AP, cites lottery director Gordon Medenica’s internal email last month to staff about IGT’s protest against a recommendation to award the contract to a rival company.

MESSING WITH TEXAS: A senior Trump economic adviser told a Maryland business group Tuesday that Maryland should become more like Texas, cutting taxes and regulations to spur economic growth, Len Lazarick writes in MarylandReporter.com. Economist Steve Moore of the Heritage Foundation told a breakfast meeting of the conservative Maryland Business for Responsive Government that Donald Trump would win the national election, perhaps even win Maryland, and cause a major realignment of the Republican Party.

CONVERSATION WITH KATHY SZELIGA: Tom Hall of WYPR-FM speaks with Del. Kathy Szeliga, the Republican nominee for the U.S. Senate seat being vacated by Barbara Mikulski, who has served in Congress longer than any woman in history. Szeliga will go head-to-head with her chief rival for that seat in November, Rep. Chris Van Hollen, a Democrat, who has served Maryland’s 8th Congressional District since 2003. (To listen to Hall’s pre-primary interview with Rep. Van Hollen on the March 2, 2016 Maryland Morning program, click here.)

VP DEBATE A TIE: In MarylandReporter.com, Professor Richard Vatz scores the debate a tie. The key to the debate was that throughout, Kaine could not defend his presidential nominee from all of the accusations that Trump never was able to make in their last debate but that Pence made. Pence not only couldn’t defend Trump on his erratic rhetoric, but he simply denied that Trump had said things that he had said.

SIX ACA CO-OPS REMAIN: Evergreen Health Care, based in Columbia, is one of only six health cooperatives left in the U.S. from a high of 23 created under the Affordable Care Act. Morgan Eichensehr of the BBJ writes that the majority of those co-ops have folded — the victims of an uncertain health care industry where costs are high and prices keep rising.

HEALTH COMMISH OKS NEW PG HOSPITAL: Maryland Health Care Commissioner Robert E. Moffit has recommended approval of the proposed Prince George’s County Regional Medical Center, clearing one of the last major hurdles in what has been a long and sometimes frustrating regulatory process for the project’s supporters, Arelis Hernandez reports in the Post.

CASSILY TO RETIRE: Saying “I’ve been here long enough,” longtime Harford County State’s Attorney Joseph I. Cassilly announced Tuesday that he will retire Jan. 1. Cassilly, who has been the county’s chief prosecutor since January 1983, said health was not a factor in his decision to step down during his ninth term in office, Steve Lash writes for the Daily Record.

FEDS SEE VIOLATIONS IN ANNAPOLIS HOUSING AGENCY: The Annapolis housing authority could have to repay $3 million in federal funds in the wake of a federal audit that found problems in how the organization paid for services in almost a dozen contracts, Chase Cook of the Annapolis Capital reports. Violations of rules on federal spending included poor record keeping and payments to vendors without official contracts with the Housing Authority of the City of Annapolis.

HOYER TOUTS TECH JOBS: Inside the Arundel Center in Annapolis, Rep. Steny Hoyer and some of the state’s leaders in technology work shopped the Democrat’s jobs and technology modernization plan much like they would an idea to grow their own businesses, writes Phil Davis in the Annapolis Capital. Terms like “incubators” and “maker spaces” were touted as the incumbent congressman looked to both sell and refine his ‘Make It In America’ economic platform with members of the Chesapeake Regional Tech Council.

FREDERICK COPS GET BODY CAMS: The Frederick Police Department became the latest department to roll out body-worn cameras to its patrol officers Tuesday. Jeremy Arias of the Frederick News Post writes that earlier this year, the department bought 18 Taser International Axon model body cameras and the software needed to run them for $30,420, the majority of which was funded by a federal Byrne Justice Assistance Grant.