Michael Thomas and Alberta Wilkerson stand on the front steps of their home in the Broadway East neighborhood of Baltimore on June 13, 2019. The couple’s home has no air conditioning and both have health conditions that are made worse by the summer’s heat. University of Maryland Photo/Amina Lampkin

As the temperature in their rowhouse apartment rose to a humid 96 degrees Fahrenheit during a summer heat wave, Michael Thomas and Alberta Wilkerson sat on their bed, in front of fans, wiping sweat and drinking water, trying to keep their minds off the heat.

Thomas, 61, played computer games and kept an eye on the TV. Despite the heat, Wilkerson had an appetite, so she boiled a hot dog and ate it while she watched “Criminal Minds.”

“I just keep my mind right there,” Wilkerson, 49, said, pointing at the TV. “I just wipe sweat all day.”

The couple decided to stay in their unairconditioned, second-floor home in East Baltimore during the scorching 11-day stretch in July. It was a risky decision.

The heat index, which takes into account temperature and humidity, describes how hot the air feels. At 10:30 p.m. on July 18, the heat index in their living quarters reached a high of 116 degrees, according to a sensor they allowed reporters from the University of Maryland’s Howard Center for Investigative Journalism and Capital News Service to place in their home for several weeks. That was 22 degrees hotter than the heat index outdoors.

Between them, Thomas and Wilkerson take about 20 medications for ailments that include lung disease and high blood pressure for Thomas, and lung disease, mental illness and heart disease for his wife. Their problems rank high on the list of those that exposure to high heat and humidity can worsen — sometimes dangerously so. Public health experts warn that danger will only increase as the climate warms.

Heat waves are especially perilous because consecutive days with the heat index at 103 degrees or above greatly increase risks for older people, children, pregnant women and anyone with heat-affected chronic disease.

As heat and humidity increase, it becomes harder for sweat to evaporate and the human body to cool off. Under physical and mental stress people may struggle to maintain core organs and systems: their cardiovascular system, lungs, kidneys and brain.

The body’s alarm bells begin to ring. The heart pumps faster to cool the body when its core temperature soars toward the red zone of 104 degrees and beyond — and likely death without fast medical intervention.

The rate of emergency medical calls for psychiatric disorders and drug and alcohol overdoses also increased sharply, the analysis found. The American Psychiatric Association says “exposure to extreme heat has been associated with increased use of alcohol to cope with stress” and an “increase in suicide.”

“Heat affects the body in a number of different ways,” Dr. Matthew J. Levy says after a busy night in the emergency room of The Johns Hopkins Hospital in East Baltimore, where he has worked for 14 years. It was the morning of July 19, and the outdoor temperature would rise to 98 degrees.

Successive days of high temperatures and humidity make it “harder on the human body to maintain homeostasis,” including normal body temperature, he says. Patients may arrive at the ER with such symptoms as shortness of breath, pain, exhaustion, dizziness, mental confusion and a high temperature.

Untangling the causes isn’t always easy. Some medications patients are taking for chronic heart or lung disease, for example, can place people at greater risk for heat illness, Levy says.

Compared to younger people, the elderly are less able to control their temperature, have weaker immune systems and suffer from more chronic diseases. Cognitive issues, limited mobility and social isolation can increase their vulnerability.

Audrey DeWitt is 67 and suffers from Type 2 diabetes, asthma she says is triggered by seasonal changes, high blood pressure and peripheral vascular disease, which causes fatigue and leg pain so severe she says it makes her feel like she’s “frying in grease.”

Her breath becomes short in the heat and humidity, which cause airways in her lungs to become inflamed and constricted. Pollution, such as ground-level ozone that increases in the summer, makes breathing even harder.

Some complications of diabetes, including damage to blood vessels, can affect sweat glands, limiting the body’s ability to cool, which can bring on heat exhaustion and heat stroke, according to the U.S. Centers for Disease Control and Prevention.

The cardiovascular system is especially stressed by extreme heat. As the heart pumps faster to send more blood to the skin to reduce heat, the resulting sweat may lower levels of crucial minerals like potassium and sodium. Someone with heart failure may experience a drop in blood pressure, causing dizziness.

DeWitt has two air conditioners, one on each floor, but they don’t cool the entire house. At 6 a.m. on July 20, a sensor placed on her first floor by University of Maryland journalists recorded a heat index of 92 degrees — That was two degrees hotter than the heat index outdoors.

Young children are also vulnerable in extreme heat, the American Academy of Pediatrics warns. They may experience many of the problems adults face, such as heat exhaustion and heat stroke. Asthma is of particular concern because the disease is more prevalent in low-income areas like McElderry Park in Baltimore, the city’s hottest neighborhood. 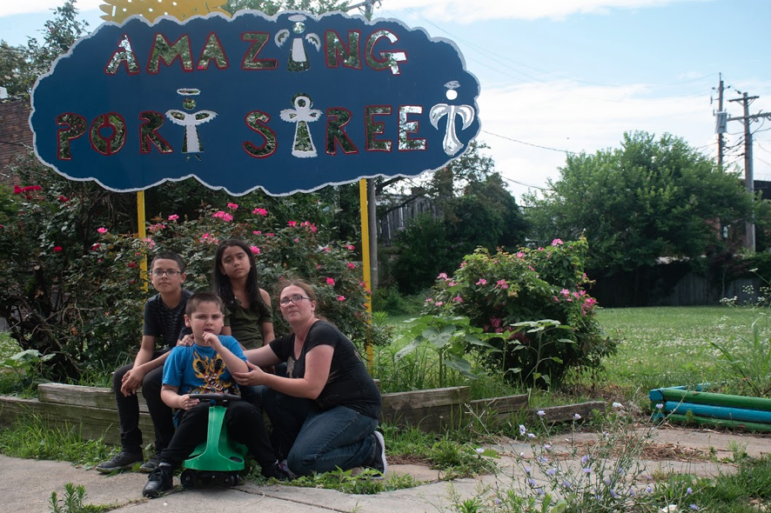 Stephanie Pingley sits outside the Amazing Port Street commons at Amazing Grace Evangelical Lutheran Church in the McElderry Park neighborhood of Baltimore with two of her sons and her niece, right, on June 19, 2019. Her three children all have asthma, which gets worse when heat and humidity are high. University of Maryland Photo/Amina Lampkin

Stephanie Pingley, 31, who lives there, works hard to protect her asthmatic sons from the worst effects of the disease. She has two air conditioners, but one of the boys must sleep in a bedroom without one. It can get “as hot as Hades,”  she says.

That was reflected in readings of a sensor placed in that room. Over a seven-day stretch, the heat index climbed as high as 118 degrees and never dropped below 88 degrees.

“If we ever move from here,” Pingley says, “I want a house with central air.”