House Speaker Michael Busch welcomes Gov. Larry Hogan to the rostrum for the 2018 State of the State address. The two seemed to get along better after Busch's medical problems and the governor's cancer. Governor's Office photo

Gov. Larry Hogan talked a lot about bipartisan cooperation in his State of the State address to the General Assembly Wednesday. Democratic legislators say it was mostly talk.

There is little evidence of real give and take on many contentious issues between the second floor of the State House where the governor and his staff have their offices, they say, and the first floor chambers where the legislators meet.

Democrats do not bother to talk about bipartisanship in a legislature where they hold two-thirds of the seats. But in practice, in most of the 13 standing committees there is real cooperation and respect between Democratic legislators and the minority Republicans.

Hogan and the Democratic leaders do agree in general that the extreme partisanship in Washington is bad and Annapolis is much better.

Hogan mentioned Washington in negative terms six times in his address. “One need only look to Washington to see the destruction that is caused when hyper-partisanship and inflammatory rhetoric permeate the debate and erode our faith in the institutions of government,” he said.

“We don’t want Annapolis to become like Washington, where bad policy is passed with a promise that a fix will come later,” Hogan said later in the speech. He was referring to the paid sick leave bill that Democrats overwhelmingly passed last month, overriding his veto. That’s hardly a bipartisan gesture.

Hogan also tweaked the Democrats on redistricting, an issue on which they’re miles apart. 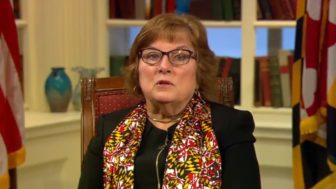 Republican Hogan doesn’t want anything to do with Trump and did not mention him in his speech– and is more actively opposing his policies, such as cutting funds for the Chesapeake and cuts to Obamacare subsidies that will raise health insurance rates. Democrats, on the other hand, want to lump Hogan together with Trump, and those other nasty Washington Republicans.

Hogan’s main message is that he is not at all like that other chief executive down the road, and that he gets along with everybody. As they have for more than a year, Democrats want to remind voters that Hogan is at least nominally of the same party as Trump, even though the president is pretty much his own brand. 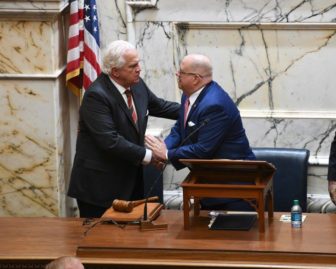 Senate President Mike Miller greets Gov. Larry Hogan as he is about to give the 2018 State of the State address. Governor’s Office photo

Hogan’s other main message — besides touting more jobs, higher wages, an improving economy, great schools, and a super-educated workforce — is that “we cannot afford to turn back now,” a phrase he used six times in his speech.

Translation: “you cannot afford to turn me out of office” in this year’s election.

On top of many smaller goals that legislators might have this session, Democrats want to pound home the message that “we cannot afford” to give Hogan a second term, especially with redistricting coming up in 2021.