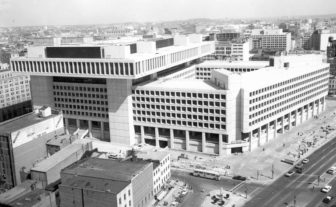 FBI HQ FUNDS COULD BE STRIPPED: A House panel Thursday approved stripping money from the proposed new headquarters for the Federal Bureau of Investigation, an ominous sign for a project that is already facing challenges under the Trump administration, John Fritze of the Sun reports. A bipartisan group of lawmakers has been putting aside money for the headquarters for years, but legislation approved by a House Appropriations subcommittee would rescind $200 million of that funding. Maryland officials have been competing with Virginia and hope to land the new project, and the 11,000 jobs associated with it, in Prince George’s County.

PLANNED PARENTHOOD PROTECTIONS: On Saturday, Maryland will become the first state in the nation with a law to protect funding for Planned Parenthood from a possible federal cutoff, Michael Dresser of the Sun reports. Legislation ensuring that the state will cover the cost of the group’s health care services in Maryland if Congress blocks it from receiving federal funding is among the more than 250 bills passed by the General Assembly that will become law July 1.

TUITION BREAKS, OTHER LAWS GO INTO EFFECT: Students attending Hagerstown Community College from neighboring counties in West Virginia, Pennsylvania and Virginia will get a break on tuition rates, thanks to a new Maryland law that allows lower out-of-state rates for students from border states, Tamela Baker of the Hagerstown Herald Mail reports. The law is one of several with local impacts that take effect on Saturday.

MARYLAND UNDER THREAT: In an op-ed for the Post, progressive Hal Ginsberg writes that Maryland, particularly Montgomery County, has become a bright spot in the national health-care picture. From 2012 to 2015, subsidies to health insurance purchasers and the expansion of Maryland’s Medicaid program under the Affordable Care Act caused the percentage of uninsured Marylanders to fall from 10.1% to 6.7%, where the national average is 9.4% In 2014, the state pushed to increase reliance on community-based health centers, rather than emergency rooms, generating healthier outcomes at a lower cost. Tragically, Republican threats to the ACA are jeopardizing these gains.

APPOINTMENT SHOWDOWN: Gov. Larry Hogan’s decision to reappoint and continue to pay Health Secretary Dennis Schrader and Planning Secretary Wendi Peters beginning with the new fiscal year starting Saturday flies in the face of budget language passed this year meant to prohibit those actions. In addition to raising the specter of a rare court battle between the branches, it could also potentially have financial ramifications for the two appointees.

DELAY POSSIBLE IN MD GERRYMANDER CASE: Steve Lash of the Daily Record reports that a Republican court challenge to a solidly Democratic congressional district in Maryland might have to await a Supreme Court decision on whether GOP lawmakers in Wisconsin drew legislative districts so contrary to the state’s political breakdown that they violated the constitutional rights of Democratic voters. A U.S. District Court panel in Baltimore on Wednesday ordered the GOP challengers and the state Board of Elections to address whether the Maryland challenge should be stayed pending the Supreme Court’s resolution.

MARYLAND DIVIDED PART 3: In Part 3 of Maryland Divided in MarylandReporter, J.F. Meils and Sebastian Obando of CNS report that on how some people in Frederick and Harford counties are finding ways to blend the old economy with the new one. In one instance, they report that before he got involved in the beer business, Frederick County farmer Greg Clabaugh grossed about $600 an acre for growing traditional crops like corn and soybeans.Now, on the land where he grows barley and rye, he grosses $6,000 an acre.

ELFRETH ANNOUNCES SENATE BID: One of Annapolis’ most visible young Democrats is hoping to become the capital city’s next state senator. Sarah Elfreth announced Thursday that she has launched a bid to replace Democratic state Sen. John Astle, who is leaving the seat to run for mayor of Annapolis in 2017. Astle has served in the Senate since 1995, Amanda Yeager of the Annapolis Capital reports.

DOUGLASS UNITES NORTON, HARRIS: Jenna Portnoy of the Post reports that there is little Del. Eleanor Holmes Norton, D.C.’s firebrand nonvoting representative, and Rep. Andy Harris (R-Md.), a conservative statehood opponent, agree on. But the unlikely duo paired up recently to introduce a bill to establish a commission to commemorate the bicentennial of the birth of Frederick Douglass, the famed abolitionist who is claimed as a native son by both Maryland and the District of Columbia.

CARSON SEEKS HOUSING PROGRAM EXPANSION: Dr. Ben Carson, secretary of the U.S. Department of Housing and Urban Development, said Thursday he wants to push a proposal to significantly expand a program that allows cities such as Baltimore to sell public housing units to private developers in order to raise money for repairs, reports John Fritze for the Sun. The story is topped by a short explainer by Fritze.

DANCE GETS NEW JOB: Baltimore County School Superintendent Dallas Dance ends his five-year tenure leading one of the largest systems in the nation on Friday and begins a new consulting job on Monday. The 36-year-old superintendent said he will become a senior vice president at MGT Consulting Group, a large Florida-based consulting company with offices around the country, writes Liz Bowie for the Sun.

LIQUOR STOLEN FROM LIQUOR BOARD: The AP Is reporting that two  men have been charged with taking more than $21,000 worth of alcohol from trucks parked at a Montgomery County Department of Liquor Control warehouse. Montgomery Police  said in a statement that the alcohol was stolen from parked trucks. Police say the Department of Liquor Control reported more than half a dozen thefts from February to May.