Cows at the trough on a farm in Walkersville, Maryland. Milk prices have rebounded slightly from a low in 2016, but are still making life difficult for Maryland's dairy farmers. Photo by J.F. Meils/Capital News Service via AP.

As Maryland’s rural counties lose farmland, consider fracking and face economic challenges, the Capital News Service at the University of Maryland Philip Merrill College of Journalism presents a series examining the political divide between urban and rural parts of Maryland and the state of the economy in rural Maryland. This is the third part in a five-part series.

By J.F. Meils and Sebastian Obando

FREDERICK — Before he got involved in the beer business, Frederick County farmer Greg Clabaugh grossed about $600 an acre for growing traditional crops like corn and soybeans. 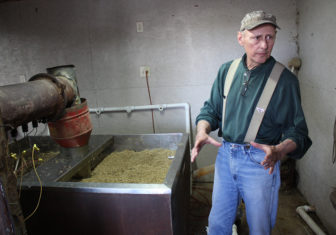 Farmer Greg Clabaugh explains how to malt grains for brewing at his farm in Keymar, Maryland. Photo by J.F. Meils/Capital News Service via AP.

Included in that number is payment for malting, a process where grains are partially germinated then heat-dried, allowing them to be more easily consumed by yeast in the brewing or distilling process.

“You gotta put the time in,” said Clabaugh, about learning to malt. “We started at the bottom and worked our way up. Now I have requests from all over.”

Clabaugh’s partner in his malting operation is Tom Flores, brewmaster for Monacacy Brewing and Brewer’s Alley, both located in the city of Frederick. Clabaugh and Flores are the very portrait of what counties like Frederick are trying to do economically — find synergies between traditional agricultural interests and newer down-county businesses, including tech, tourism and a booming food and booze scene in the city of Frederick.

Unlike Western Maryland and Eastern Shore counties, which are starved for growth, Harford, Carroll and Frederick are trying to ensure their farming heritage doesn’t become a casualty of their recent economic success and decades-long population growth.

The gift of geography is not a gift for all

From 1960 to 2010, the counties of Frederick, Carroll and Harford each experienced more than 200 percent population growth, most of it down-county, in commuting distance to either Washington, D.C., Baltimore or both.

“We’re on the precipice of being a full-fledged suburban county,” said Harford County Executive Barry Glassman, R. “We’re down to four or five dairy farms.”

The effects of the demographic shift over the past few decades hit traditional farming businesses hard, both in land swallowed for real estate development and increases in agricultural production costs.

“We can’t compete with a developer selling $500,000 homes because they can spend a lot more on land,” said Colby Ferguson, director of government relations from the Maryland Farm Bureau.

Where farms disappeared, commuters filled in, bringing their urban paychecks to fast-developing rural areas. The city of Frederick, now the second-largest in Maryland at about 70,000 people, was a big economic driver and diversifier.

The counties of Harford and Frederick also benefit from an enviable bit of stable government largesse — their biggest single employers are both military. Aberdeen Proving Grounds in Harford employs 21,000 and Fort Detrick in Frederick is responsible for 6,400 jobs, according the Maryland Department of Commerce.

Beyond direct employment, the ancillary economic benefits of the bases are enormous.

Fort Detrick is home to a range of research labs, military medical operations and biodefense efforts. A small cottage industry of private biomedical support firms and services has grown in the area as a result.

Though not directly related, a tech community has also been steadily expanding in Frederick, led by companies like Yakabod and Swift Systems that focus on IT and networking solutions for government and private clients.

However, like Fort Detrick and Aberdeen Proving Grounds, the tech sector in Frederick is located in the county’s southern end, reinforcing the economic divide and maintaining pressure on dwindling agricultural lands to the north.

“With more people coming to Frederick County, it makes our land prices go up,” said Katie Albaugh, agriculture business development specialist for Frederick County. “So farmers, with the low grain prices, need to farm more ground to make a living, but they can’t afford to buy the land because the price has gone up.”

The challenge might be preventing one area from swallowing the other.

“I think that the two can co-exist,” said Frederick County Executive Jan Gardner, D. “But we really need to focus our growth around urban areas.”

In Frederick anyway, political forces seem to be aligned in this regard.

“We’re trying to keep our development south of I-70,” said Frederick County Councilman Bud Otis, R. “If something is going to jump that line, it’s going to have to be something pretty special.”

The end of dairy in Maryland?

Frederick was once one of the largest milk-producing counties in the country. Soon, it could be one of the smallest.

According to Maryland Dairy Industry Oversight and Advisory Council, there are about CORRECTION 88  dairy farms in Frederick, down 50% in the past 15 years.

“Family dairy farming in Maryland is done,” said Clabaugh. “Nowadays, you need to have a couple hundred cows” just to be profitable, a reality that is driving some smaller farms out of business.

The decline of the dairy business in Frederick reflects a brutal economic climate that combines depressed milk prices with rising operating expenses — a mix that has eroded profits and pushed more farmers into financial turmoil.

“It’s a miracle anyone’s milking cows because you don’t know what (price) you’re getting from moment to moment,” said Jimmy Stup, whose dairy farm in Walkersville includes more than 1,000 milk cows. 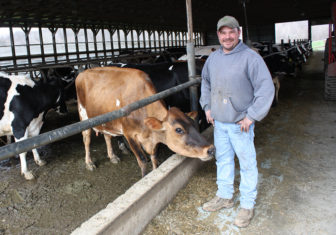 Myersville, Maryland farmer Joe Mangiafico in his cow barn. “Farming is not as simple as it was 30 years ago,” he said. “But I can’t see myself doing anything else.” Photo by J.F. Meils/Capital News Service via AP.

Milk prices received by Maryland farmers reached a high of $26 per 100 pounds in the spring of 2014 then began a rapid descent, hitting a low of $15.30 per 100 pounds in May 2016, according to Maryland Dairy Industry Oversight and Advisory Council. Prices have risen somewhat and are now above $17 per 100 pounds.

“Primarily, there is just too much milk and not enough demand,” said Mark Powell, chief of marketing at the Maryland Department of Agriculture. “In the United States, fluid milk consumption continues to go down.”

While these developments have hit dairy operations across the country, economists say Maryland farmers are at a greater disadvantage because other costs, like land and labor, are more expensive.

Data from the U.S. Dept. of Agriculture show that the cost of running a farm in Maryland is higher than in most other Mid-Atlantic states, although costs are lower than average in Frederick. Average farm production expenditures in 2012 were $158,300 in Maryland compared to $127,600 in New York and $101,900 in Pennsylvania.

The high cost of farming in Maryland may explain why big farms are buying up smaller ones — because they’re better able to withstand the bad times.

“While the (number of) dairy farms may be getting smaller, the number of milk cows might be staying the same because the remaining dairy farms are larger,” said Jim Hanson, a professor in the Agricultural and Resource Economics department at the University of Maryland.

The total amount of annual milk production in Maryland has fallen over the past three decades, but has remained relatively stable in the past six years at more than 900 million pounds, even though gross income has dropped sharply.

Can beer, tech and tourism save ag?

The partnership between Greg Clabaugh and Tom Flores happened because Clabaugh picked up the spent grain Flores used for brewing to feed to his dairy cows.

One day, they got to talking.

“I asked him: ‘Can you grow barley?’” recalled Flores. “(Clabaugh) said: ‘If there’s anything I can grow, it’s barley,’ and we just sort of went from there.”

The result was Amber Fields Malting and Brewing, a company that Flores believes can be emulated successfully in Maryland.

“A lot of Maryland farmers know how to cultivate land for small grains,” said Flores, who is almost exclusively malting rye with Clabaugh at the moment, for Monacacy’s Riot Rye Pale Ale.

As expected, Flores is a big proponent of keeping his ingredients as local as possible. Despite producing one of the first beers in almost a century to be made 100 percent from ingredients produced in Frederick, he is no zealot.

“Local for the sake of local alone is not a good enough reason to pursue it. You need to start with high quality,” he said.

For Monica Pearce, who opened Tenth Ward Distilling with Kyle Pfalzer in 2016, the benefits of local are two-fold. “It’s really important to me to limit the impact we have on the environment,” she said. “The other side is having your products influenced by local flavor.”

Selling a sense of place 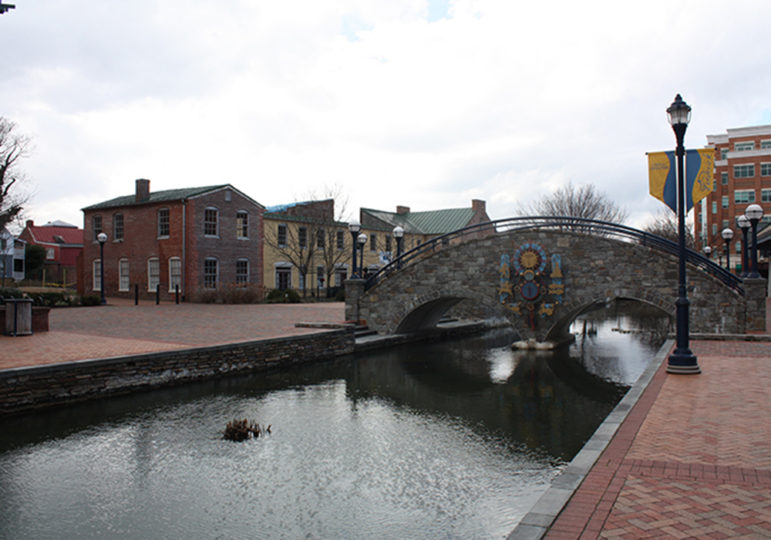 The Carroll Creek area in the city of Frederick in Maryland was devastated by a flood in 1976, but rebuilt to be the center of the city’s historic quarter and a popular attraction for visiting tourists and locals alike. Photo by J.F. Meils/Capital News Service via AP.

According to Helen Propheter, Frederick County’s head of economic development, the county earned the equivalent of $1 million a day in tourist revenue starting in 2014.

A big part of that draw is the city of Frederick, its restaurants and, yes, its breweries and distilleries, which the county now promotes with a dedicated tour map.

“People are starting to ask where their whiskey comes from,” said Pearce. “They wouldn’t have done that 10 years ago.”

Frederick’s food, drink and historic vibe have combined to create something intangible but crucial for the entire county — a scene.

Even Frederick’s tech community stands to benefit, if they can just get the word out.

Scott Ryser, CEO of Yakabod, a collaborative software company that is one of Frederick’s first tech denizens, said he wants to put a billboard on I-270 south that tells people they’re driving in the wrong direction.