Decades ago, Wingate Harbor was full of working oystermen in the late fall and winter, plying the Honga River’s thick oyster bars and bringing their catch to the dock.

But when diseases took hold and the harvest plummeted, the oystermen hung up their dredges and tongs and left this lower Dorchester County village for other lines of work.

Gradually, as regulations tightened on crabs and striped bass, other watermen left, too. After a fire at a dockside crab processing plant several years ago, Wingate Harbor became quiet.

Today, three watermen are back, pulling up oyster cages from leased bottom about one-half mile from the dock at the Honga Oyster Co. Longtime pound-netter Donny Simmons is the packer, putting the day’s orders in neat boxes. David Tippett, who trotlined for crabs, runs the boat to oyster cages and cleans them. Scott Hughes, who once potted for crabs, counts out the oysters for orders.

“This is the future. The past is the past,” Hughes said. “Watermen are not going to be able to stay in business. I imagine the last waterman we see working is out there working today.”

They’re joined by Bill Cox, a computer program manager from Baltimore who also gave up his day job to start the oyster farm.

When Maryland legalized aquaculture in every county in 2009, state officials envisioned that watermen would transition quickly into oyster farming. They hoped that private industry would put more oysters in the water, both to improve the Chesapeake’s health and take some of the pressure off the struggling public fishery.

The state provided millions of dollars in low-interest loans. It offered classes on how to set oysters, while Maryland Sea Grant helped to write business plans. But progress was slow.

The watermen that did enter the business generally worked in spat-on-shell operations, where they planted oysters directly on the bottom and left them to fend for themselves, not unlike wild shellfish. Whatever survived to marketable size generally went to shucking houses

Relatively few tried cultivating oysters in cages, though those bring premium prices when sold on the half-shell in raw bars and restaurants. That requires a more upfront investment — $20,000 and up — plus constant labor to keep the cages clean.

Some watermen were downright hostile to the idea of aquaculture, as their ancestors had been. They worried big corporations would take over the public oyster grounds and force them out of business.

But over the last few years, poor conditions on the water, increased regulations, an aging population and a desire for more control over one’s destiny have drawn more watermen to oyster farming. There, skills like understanding the animals’ biology, a strong back and a hard work ethic are in demand, and the pay and benefits beat erratic self-employment.

“When you don’t have money, you’re better off quitting, and that’s what I’ve done,” said Simmons, a Toddville native who started working with Cox part time in 2010 and later became his partner. Last year, after an unusually poor menhaden catch, he quit fishing for good at age 63.

“Any young person coming up, I tell them, this is what they should do,” Simmons said.

Last year, watermen accounted for nearly half of the 63,236 bushels of oysters produced from private leases, according to the Department of Natural Resources. In the public fishery, in comparison, 1,100 licensed oystermen landed 383,090 bushels. 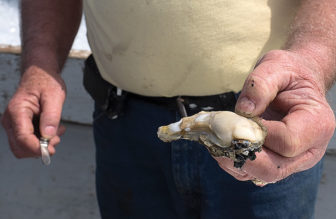 Though still small, oyster farming has been growing steadily, said Don Webster, aquaculture expert with the University of Maryland and co-chair of the Aquaculture Coordinating Council. By the end of 2016, the DNR had approved 393 shellfish aquaculture leases for 173 different leaseholders covering 6,186 acres.

Webster said he’s particularly excited by the increase in younger watermen seeking his advice. He is working with Kelley Cox of the Phillips Wharf Environmental Center on Tilghman Island to offer them training.

“They’re looking for small acreage that they can start with and build it up,” Webster said. “They don’t want to go into a lot of debt.”

Maryland oyster aquaculture is now a $5 million business. Production since 2012 has increased more than 1,000%. Farm-raised Bay oysters, practically unheard of just a decade ago, are available in restaurants all over the region.

At the same time, the public fisheries have become tighter. Expenses for crab pots, bait and boat maintenance drove Hughes to sell his boat in 1999 and eventually, even quit working on someone else’s.

For some watermen, the skepticism about shellfish farming continues. Others still view it as a threat. Clammers have protested leases in the Chester and Patuxent rivers that they feared would block them from dredging for razor clams. Tilghman Island watermen are protesting Kelley Cox’s 5-acre lease application, Webster said.

But many more are looking to try it, said Johnny Shockley, a former waterman who was one of the first to dive in. Now, the co-owner of Hoopers Island Oyster Aquaculture Co. has several leases in the Honga River and in Tar Bay. He’s building an oyster hatchery in Crocheron, the first such private facility in decades.

“We’re not going to get these oysters back into the Chesapeake Bay without the watermen being a part of it, and we shouldn’t even try it,” Shockley said. “The traditions, and everything that goes into the watermen community, we don’t want to let that go.”

Shockley has recruited two watermen to work for him. Other farms in the area are doing the same, tapping into that know-how and providing employment in places where jobs are scarce.

When he started his oyster farm on Hooper’s Island in 2013, Ted Cooney thought he could manage alone. But as the oysters grew, so did the hours he spent tending them. It’s no coincidence, Cooney said, that he named his business Madhouse. He was about to lose his mind — and possibly sell his farm — when he met Scott Robinson and his son, Scotty.

The elder Robinson had done just about every job on the water, but steered his son into auto mechanic work. Nevertheless, Scotty wanted to be a waterman, so the father-son team began looking for an opportunity.

“They wanted to be oyster farmers, but they didn’t have the money. I had spent the money, and I needed help,” Cooney said.

“The most critical piece for anyone in this business is having someone who will get up in the morning, no matter what the weather is, and go to work in the dark,” said Cooney, a boat builder who fished in Alaska before starting a health care financial services company with his father. “For me, not working on the water my whole life, I got tired of it. It wore me out. Not them. They go to work when most people don’t want to work outside.”

At Wingate, Tippett says the days are less stressful, because the pay is steady. Simmons is happy he no longer has to rise at 1 a.m. to get ready for fishing. But their jobs haven’t changed much — they’re still working with oysters, boats and fishing equipment.

“These guys,” Bill Cox said, “If they’re not watermen, then I don’t know what they are.”