CAMBRIDGE — Kevin McClarren has been growing oysters in nets on the Chesapeake Bay for 20 years.

“We were told it would never work,” said McClarren, who manages four acres of floating oyster grounds for the Choptank Oyster Co. near Cambridge in Dorchester County. “Now we’re ground zero for the artisanal oyster movement in Maryland.” 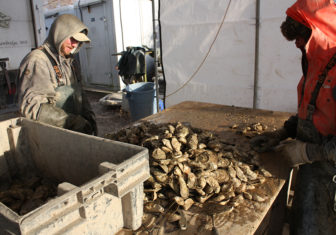 Culling oysters ready for market is a daily job in the aquaculture business. At Choptank Oyster Company in Cambridge, Maryland, the work is done outdoors year-round. Photo by J.F. Meils/Capital News Service via AP.

Since 2011, MARBIDCO, the Maryland Agriculture and Resource-Based Industry Development Corp., has doled out 50 loans to budding shellfish aquaculture startups for a total of $3 million.

According to McClarren, the problem is there’s not enough demand in-state for all the newly cultured oysters being produced — or enough distributors to move them to markets beyond Maryland.

Which makes aquaculture — like solar, another relative newcomer to the Eastern Shore — not quite the economic salvation some hope it will be. Similar to Western Maryland and the state’s northern counties, the Eastern Shore is in the process of forging a new economic identity.

The old economic mainstays of crop farming, raising chickens and catching fish and crabs provide jobs and preserve the area’s character, but all three industries face economic pressures that make their future uncertain.

There are about 304 million chickens on Maryland’s Eastern Shore, or 670 per resident, according to the U.S. Census of Agriculture. In 2015, chicken production was valued at $930 million, or 41% of the state’s total cash farm income.

The issue for some on the Eastern Shore is how the broiler business is changing, specifically in the size of chicken houses, which have evolved over time from open-air buildings that were about 16,000 square feet to enclosed structures of some 36,000 square feet, housing upwards of 30,000 chickens each.

The impact on air quality from the larger chicken houses is coming under increasing fire from environmentalists and politicians.

In April, the D.C Court of Appeals overturned a 2008 Environmental Protection Agency order that exempted chicken producers from following federal air pollution standards for animal waste. The industry is expected to appeal to the Supreme Court. If they lose or the court doesn’t take the case, chicken growers will have to begin complying with EPA reporting standards as early as July.

“It’s not just the stinky smells,” said Sacoby Wilson, an environmental health scientist from University of Maryland. “There are different contaminants (coming from the chicken houses) that can impact your eyes, nose, throat, mood, cause asthma and contribute to other respiratory conditions.”

Should the industry lose its legal fight, compliance with EPA standards could significantly impact the cost for growing chickens on the Eastern Shore.

“Right now they (growers) don’t have to have any technology to reduce emissions coming out of those houses, so this is actually a game changer,” Wilson added.

As watermen fade, can aquaculture fill the gap?

There are two people on the Maryland state seal, a farmer and a fisherman. Both are under threat on the Eastern Shore, but the plight of the area’s watermen is exceedingly desperate.

“We are a dying breed,” said Robert T. Brown, president of the Maryland Watermen’s Association.

According to the National Marine Fisheries Service, the average crab haul in the 1980s was about 45 million pounds a year. By the 2000s, that number had decreased to 29 million pounds per year, prompting sweeping environmental and fishing regulations that went into effect in 2008.

Those efforts appear to be paying off. According to the 2017 Blue Crab Winter Dredge survey, a measure of the total blue crab population, the spawning-age female crab population in the Chesapeake Bay is 250 million, the highest in the survey’s history.

“If you take the long view and you look at the return on investment in making sure water quality is improving, there are very real economic benefits to citizens and communities in the bay watershed,” said Alan Girard, Maryland’s Eastern Shore director for the Chesapeake Bay Foundation.

Popular in discussions about future watermen industries with a low environmental impact on the bay is aquaculture, specifically oystering without using the bottom of the bay.

The economics of growing oysters in netted floats versus harvesting them from the wild is stark. Depending on the market, a cultured oyster will fetch more than three times one that is pulled directly from the bay bottom. But the work — and start-up time for new operators — is daunting. It takes two to five years for an oyster to mature. And culling oysters ready for market must be done by hand on a daily basis.

Finding buyers for oysters is another challenge. Even for established operators like Choptank, there are only so many distributors.

According to McClarren, there’s not enough demand in Maryland to consume all the oysters being produced in-state, so selling them outside Maryland is crucial. “Choptank Sweets” can be found as far north as Maine and as far west as Las Vegas.

“The state’s pushing people into it, but they’re not looking at the back end,” said McClarren. “Nobody’s stepping back and saying let’s assess this program.”

Even if markets open up for increased oyster production via aquaculture, it seems unlikely to be a driver of employment on the Eastern Shore. At Choptank, it only takes three full-time employees to process one million oysters a year.

Like watermen, the Eastern Shore’s farmers were once a potent economic force in the region.

“If each year, the agricultural community is impacted by new and onerous bills from Annapolis, it makes it difficult for folks in the ag industry to thrive,” said Kurt Fuchs, government affairs officer for Mid-Atlantic Farm Credit, which carries about $2.6 billion in outstanding farm loans and has 11,000 borrowers scattered around the region.

According to an analysis of U.S. Census of Agriculture figures from 1997 to 2012, the date of the last census, Eastern Shore farmland is not disappearing. In fact, when combining the shore’s nine counties over the last 15 years of available data, there has been a 4 percent increase in acres of farmland, to just over a million in 2012.

Caroline, the only Eastern Shore county without any coastline on the Chesapeake, ranks first in Maryland in total value of agricultural products sold and is the state’s leading producer of wheat.

But with wheat prices depressed, many farmers in Caroline are hurting. 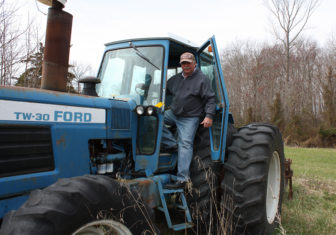 Wilbur Levengood, a Caroline County Commissioner, stands on one of his tractors on his land near Goldsboro, Maryland. Photo by J.F. Meils/Capital News Service via AP.

“The majority of farmers locally have diversified into either the chicken industry or some other industry so they can keep their heads above water,” said County Commissioner Wilbur Levengood, R-Caroline, who still farms about 300 acres near Goldsboro. “Guys who are paying big land rent and doing it on dry land, they’re in trouble,” he added.

Some Eastern Shore farmers are considering solar for revenue, thanks in part to a bill that increased Maryland’s Renewable Portfolio Standard for clean energy use to 25 percent statewide by 2020. Gov. Hogan vetoed the bill in February, but it became law via legislative override.

The biggest solar installation in the state is under construction in Somerset County. Algonquin Power & Utilities Corp., a Canadian company, is in the process of installing up to 150 megawatts of solar generation on a series of arrays across 1,000 acres on different patches of land south of Princess Anne, the Somerset County seat.

The next largest site in Maryland is in Hagerstown and produces 20 megawatts annually, according to the SEIA.

The plan submitted to Somerset County by Great Bay Solar LLC and approved by the state’s Public Service Commission estimates that upwards of 4,000 direct and induced jobs will be created during construction, but the site will only require 27 jobs once the project is done.

The Algonquin facility’s future energy is already under contract to the the U.S. government’s General Services Administration. The sweetener for Somerset County, whose local officials did not resist the facility, is $2.5 million annually in tax revenue.

But for all the potential clean energy and government revenue that could be generated by solar, not everyone on the Eastern Shore is down with the area becoming a hub.

“The last thing we want to do is replace our food sources with energy,” said Colby Ferguson, director of government relations for the Maryland Farm Bureau, which is not against solar, but does not want it located on productive farmland.

Some counties, like Talbot and Frederick, in the past have placed short-term moratoriums on the installation of solar projects in order to devise appropriate regulations.

However, the state’s Public Service Commission reviews and approves all solar projects that will generate two or more megawatts, and their authority supersedes that of the counties.

So is this the beginning of a solar gold rush on the Eastern Shore?

Some of the solar land leases being offered to area farmers make it seem that way. The leases usually run for about 25 years and their financial terms can vary widely, but offers in the $1000/acre range are common, with either lump-sum payments up front or made annually or even quarterly.

With some farmers struggling to net $100/acre growing corn or grain, saying no to solar will be hard. 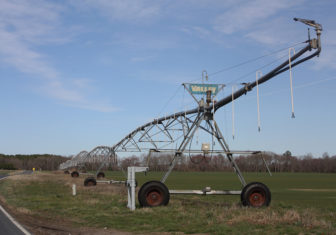 A field irrigator awaits planting season in Dorchester County. Depressed grain prices are making it harder for Maryland’s Eastern Shore farmers to make ends meet and some are looking into solar leases. Photo by J.F. Meils/Capital News Service via AP.

For the time being anyway, most won’t have to choose.

“I think there’s this misconception (in Maryland) that utility-scale solar is going to continue at the rate we have seen, at 50 to 60 megawatts (developed) a year,” said Sara Rafalson, director of policy and new markets for Sol Systems, an energy finance company. “It will continue, but it won’t be this big solar boom where all the state’s farmland will be taken up,” she added.

“A lot of (solar development) folks are turning their eyes to Virginia because the economics are more favorable than Maryland,” Rafalson said.