IMMIGRANT ACTIVISTS PROTEST: On the eve of a public hearing on the Maryland Trust Act — which would limit local governments’ ability to assist with immigration enforcement — hundreds of activists marched in Annapolis to draw attention to the bill, Pamela Wood of the Sun reports. Chanting in Spanish as police officers stopped traffic, they carried signs with slogans such as “Help stop ICE scare tactics” and “MD Trust Act: Protecting Immigrant and Muslim Communities.”

PURGING CRIMINAL PAST: A bill being debated by the General Assembly would make Maryland the first state to prohibit public and private colleges and universities from including questions about criminal history on their applications. Admissions offices could still ask applicants who have been accepted whether they have been convicted of a crime, but could not withdraw an offer of admission based on the answer, Ovetta Wiggins of the Post reports.

TROUBLE BREWING? Union Craft Brewing Co. co-founder Jon Zerivitz is excited for Guinness to bring a craft brewery and tap room to Baltimore County.  What Zerivitz doesn’t want, however, is for Guinness to get special privileges because of its name — and that is what appears to be happening with legislation in front of the General Assembly that would allow the new Relay tap room to serve more beer annually than every other brewery tap room in the state, Joshua Gordon writes for Baltimore Business Journal.

OAKS-SPONSORED BILL WASN’T: Sen. Nathaniel Oaks, an African-American lawmaker from Baltimore, says a bill filed under his name that many of his fellow Democrats say would suppress the black vote, wasn’t his.  He said the bill has been withdrawn. The legislation was sponsored in the House of Delegates by Del. Neil Parrott, a Washington County Republican.

LEGISLATORS POLICING THEMSELVES? The editorial board for the Sun opines about Gov. Larry Hogan’s proposals to increase transparency and ethics standards in Annapolis. They come at a propitious time. Not only did this year’s General Assembly session open with federal indictments implicating a current and former member in a corruption investigation, but the legislature is waiting to hear the results of its ethics committee’s investigation into Del. Dan Morhaim’s dual roles as an advocate for medical marijuana and a leader in one of the companies that has been awarded a license to produce and sell it.

SPARROWS POINT REDEVELOPMENT: For years now, southbound trucks working the Port of Baltimore have inundated residential neighborhoods in Dundalk to avoid the toll at the Francis Scott Key Bridge on I-695. A bill in the Maryland General Assembly, SB536,  hopes to change that, and boost prospects for a $2 billion redevelopment of the old Sparrows Point steel mill that will bring industry, jobs and traffic to the area, writes Dan Menefee in MarylandReporter.

OPTING OUT OF DISSECTING ANIMALS: A Maryland senator thinks students should not have to dissect animals in class if they don’t want to, Ovetta Wiggins of the Post reports.  Sen. Ronald Young (D-Frederick) introduced a bill that would require the state’s 24 school districts to develop a policy that would allow students to opt out of cutting frogs, worms, fetal pigs and other animals that have been part of science classes for decades.

ON THE SESSION THUS FAR: Len Lazarick of MarylandReporter.com, Erin Cox of the Sun and Rachel Baye of WYPR discuss  the General Assembly session on Midday with Tom Hall of WYPR-FM. This session, lawmakers consider a bill that would require many Maryland employers to provide paid sick leave and legislation to make Maryland a sanctuary state for undocumented immigrants.

DELEGATE ROUNDTABLE: Marc Steiner of WEAA-FM hosts a conversation with several Maryland delegates, who talked about legislation they have introduced before the Maryland General Assembly. They are: Cory V. McCray; Ana Sol Gutierrez; Cheryl D. Glenn and Antonio L. Hayes.

HOGAN LOTTERY PICK FINALLY OK’d: The Maryland Senate on Monday approved Gov. Larry Hogan’s nominee to head the state’s lottery system. Hogan named Gordon Medenica, the New York lottery chief from 2007 to 2012, in May 2015, but his controversial nomination has been held up in the Senate Executive Nominations Committee since last year after questions were raised about conflicts of interests and on minority participation in awarding contracts. The Maryland Legislative Black Caucus opposed his nomination, Ovetta Wiggins writes in the Post.

FACEBOOK FREE SPEECH: Gov. Larry Hogan, who first used social media to propel himself to the State House, now finds himself in another first for the state as a debate simmers over whether he violated the free speech rights of some commenters on his official Facebook page Bryan Sears reports in the Daily Record. Cases involving free speech issues on government social media accounts — especially Facebook — are just now becoming more common despite the medium being in use for more than a decade. 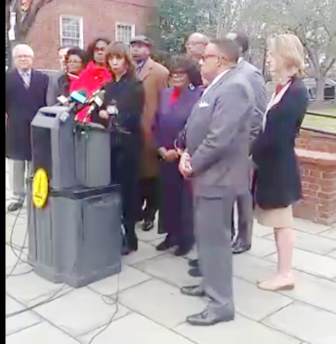 Mayor Pugh with legislators from the city delegation. Facebook

PUGH SEEKS STATE AID FOR SCHOOLS: Baltimore Mayor Catherine Pugh went to Annapolis again Monday to ask the state to help city schools close a $130 million budget gap. The Sun’s Luke Broadwater, Tim Prudente and Michael Dresser write that back in Baltimore, principals, preachers and other advocates for the schools expressed disappointment that she didn’t have more of a plan.

HBCUs ASK TRUMP’s SUPPORT: Leaders of the nation’s historically black colleges and universities want President Donald Trump to increase federal investment in their schools and take a more hands on approach to their interaction with the federal government. Officials with dozens of universities — including Morgan State University in Baltimore and Bowie State University — met with Trump at the White House on Monday as well as with Vice President Mike Pence to discuss the administration’s approach to the schools, John Fritze reports in the Sun.

BOMB THREATS AT JEWISH CENTERS: Jewish Community Center in Owings Mills and a Jewish day school in Annapolis received bomb threats Monday amid a rash of incidents reported at JCCs and Jewish day schools across the country, reports Carrie Wells in the Sun.

SALVADORAN GETS REPRIEVE: A Salvadoran woman at the center of a high-profile civil rights lawsuit alleging Frederick County sheriff’s deputies unlawfully profiled, detained and arrested her on a federal immigration warrant in 2008 was granted a reprieve Monday to remain in the country at least through this summer, Kevin Rector of the Sun reports.

AT TRUMP SPEECH: When President Donald Trump addresses a joint session of Congress on Tuesday he will be speaking to a number of guests invited by Democrats intended to symbolize opposition to his immigration and health care policies. Maryland’s congressional delegation have invited quite a few people, writes John Fritze in the Sun.