PROTECTING THE BAY, OYSTERS: The influence of a few vocal oyster watermen over the direction of the Maryland Department of Natural Resources is getting embarrassing, writes the Bay Journal’s Tom Horton in MarylandReporter.com. Not only has DNR caved in to demands to fire certain respected scientists who have helped protect the bay and oysters, DNR’s most recent cave-in  seemed the worst yet, because the agency opposed carrying out the very science upon which state law requires it to base sustainable management of oysters. 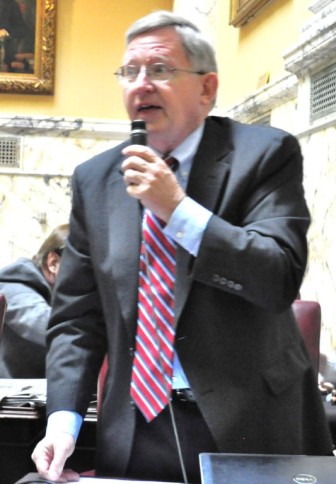 Joe Getty as a senator.

GETTY TAPPED FOR COURT: Gov. Larry Hogan appointed his top legislative lobbyist to the state’s highest court Wednesday. The Republican governor elevated Joseph Getty, his chief legislative officer and a former Republican state senator, to a vacant post on the seven-member Court of Appeals. His appointment is effective immediately, but subject to confirmation by the state Senate, which won’t meet until next year’s General Assembly session, Erin Cox and Ian Duncan of the Sun report.

BOARD DIVERSITY SOUGHT: Two Maryland officials are joining the call for more diversity on corporate boards of directors and are hoping to use the state’s pension system as leverage to get it. Comptroller Peter Franchot and Treasurer Nancy Kopp joined a dozen other state and local comptrollers and treasurers  calling for more racial, gender and LGBT diversity on corporate boards. Those officials represent a combined 6 million public retirement system participants with $1 trillion in total managed assets, writes Bryan Sears in the Daily Record.

PRIVATE SCHOOL SCHOLARSHIP BUCKS: There is new state scholarship money – $5 million – available for K-12 students who wish to attend non-public schools, including Catholic schools, and the Archdiocese of Baltimore wants families to know about it, reports Erik Zymont of the Catholic Review.

$94M FOR CURTIS BAY YARD: The Annapolis Capital is reporting that U.S. Sen. Barbara Mikulski on Tuesday announced that she successfully included $94 million in federal funds in a Senate-passed appropriations bill to support work at the U.S. Coast Guard Yard in Curtis Bay.