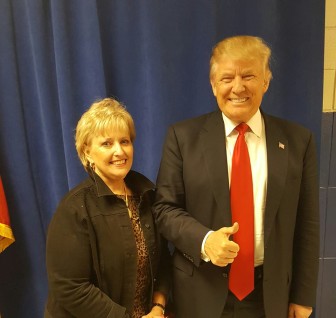 TRUMP DRAWS SUPPORTERS, PROTESTERS: Republican presidential frontrunner Donald Trump decried what he called a “rigged” primary system, but focused mainly on the general election as he campaigned for the first time in Maryland on Wednesday — a state with the potential to help clear his path to the GOP nomination, John Fritze writes in the Sun. 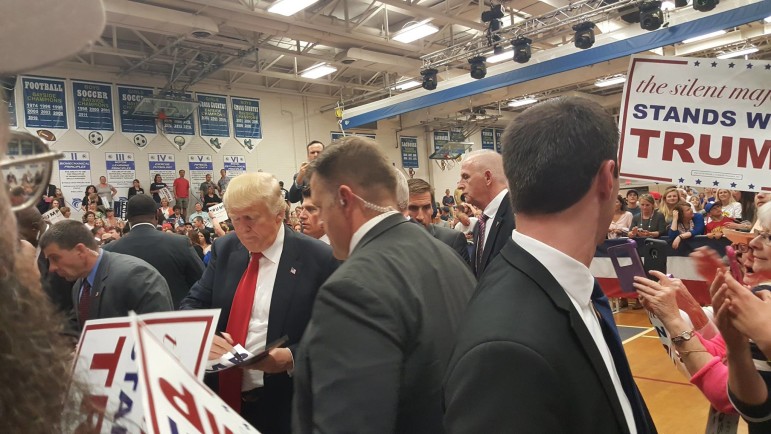 CRUZ HOLDS FREDERICK EVENT: The Frederick Police Department is working with Sen. Ted Cruz’s security team for the presidential candidate’s campaign event this morning at the Weinberg Center for the Arts in downtown Frederick, Danielle Gaines and Brandi Bottalico report in the Frederick News Post.

CHELSEA CLINTON COMES TO MARYLAND: Ted Cruz and Chelsea Clinton are planning events in Maryland before next week’s presidential primary election. Meanwhile, Donald Trump held a rally Wednesday evening on the Eastern Shore. Drawn-out fights for the nomination in both parties have forced candidates’ attention to Maryland, Tim Prudente writes for the Sun.

ON EARLY VOTING AND THE PRIMARY: Tom Hall of WYPR-FM hosts Luke Broadwater of the Sun, Kimberly Moffit, associate professor of American Studies at UMBC, and WYPR reporter Kenneth Burns about the upcoming primary.  More people have chosen to vote early in this primary election than ever before.  What does that tell us about what we might expect when the polls open on election day next Tuesday?  If the turnout in Baltimore is higher than in previous contests, who does that help, and who does it hurt?  How will the presidential races affect the contests for the Senate, Congress, mayor, and city council?

DELANEY RIVAL TOUTS INTENT: Democratic congressional candidate Tony Puca says one of the many reasons to vote for him in next week’s Maryland 6th District  primary is that he doesn’t have his eye on the next job. “I’m 68, I’m not running for governor, like my opponent,” said the Brooklyn-born Puca. He was referring to two-term incumbent Rep. John Delaney (D-Md.), widely thought to be interested in unseating Republican Gov. Larry Hogan in 2018, Bill Turque reports in the Sun.

ON EDWARDS: In a long profile for the Post, Paul Schwartzman describes the struggles that Donna Edwards has taken on in her life as she went from the daughter of an Air Force officer to a single mother and onto a career in politics, her outspokenness and the friends and enemies she has made along the way as she now seeks a seat in the Senate.

UNION BACKS, THEN OPPOSES EDWARDS: A labor union that was instrumental in electing Rep. Donna Edwards (D-Md.) to the House is now trying to keep her out of the Senate. The SEIU spent more than $1 million supporting Edwards in 2008. About a quarter of that money came from SEIU 1199, a Baltimore affiliate representing health-care workers. Now, Committee for Maryland’s Progress, a super PAC largely funded by 1199, has spent close to $500,000 to try to defeat Edwards in her neck-and-neck primary for the Senate against Rep. Chris Van Hollen, Rachel Weiner reports for the Post.

FOR SENATE, ON DEMOCRATIC SIDE: In endorsing Chris Van Hollen for the open U.S. Senate seat now held by retiring Sen. Barbara  Mikulski, the Sun editorial board opines that in the hard-fought Democratic primary, the choice is clear: Rep. Chris Van Hollen is by far the most qualified candidate to carry on the Mikulski tradition. The seven-term congressman from Montgomery County has demonstrated the same kind of leadership skills and devotion to progressive causes whether in the halls of the state Senate in Annapolis or in Congress.

Thanks to the dozens of readers that responded to yesterday afternoon’s fundraising email. For those who didn’t please consider making a donation today.

FOR SENATE, ON REPUBLICAN SIDE: Mikulski’s retirement at a time when Maryland voters are rallying around Republican Gov. Larry Hogan gives the state’s minority party the best chance it has had in a generation to capture one of the state’s two U.S. Senate seats. When Republican primary voters go to the polls Tuesday, they should pick the candidate not only best positioned to take advantage of that opportunity but also to serve the state with distinction in Washington, and that is attorney Chrys Kefalas.

HAYDEN BEFORE SENATE PANEL: Carla D. Hayden, the longtime director of Baltimore’s public library system, glided through the Senate committee hearing Wednesday on her nomination to lead the Library of Congress, Colin Campbell reports for the Sun.

REDISTRICTING REFORM TO RETURN: Tamela Baker of the Hagerstown Herald Mail reports that one issue that got a lot of attention during a statewide series of hearings last year got nowhere in Annapolis: a plan to change the way congressional and legislative district lines are drawn. But Walter Olson, co-chairman of Gov. Larry Hogan’s Redistricting Reform Commission, said the bill that resulted from the commission’s recommendations will be back next year and possibly again after that in the hopes of getting the method changed.

NO CHANGE URGED IN STATE PROPERTY TAX RATE: Maryland property owners will not pay any additional property taxes under a recommendation unanimously approved by the Commission on State Debt, reports Bryan Sears for the Daily Record. The panel voted unanimously Wednesday to recommend that the Board of Public Works maintain the state property tax rate of 11.2 cents per $100 of assessed value on real property and 28 cents per $100 on public utilities.

HOGAN TOUTS SHORE POULTRY: Deborah Gates of the Salisbury Daily Times reports that Delmarva’s multi-million dollar poultry industry is alive and well and growing and should get even bigger and better with renewed backing by Maryland’s highest-level elected official and an emerging marketing strategy targeting consumers. “There is a reason why there is a farmer on our state seal in Maryland,” Gov. Larry Hogan said. “You are such an important part of our history … our heritage.”