HOUSE OKs HOGAN BUDGET: The House of Delegates passed its version of the state budget Wednesday amid praise from many Republicans who in past years have opposed the state’s annual spending plan. The House voted 133-5 in favor of the $42 billion budget submitted by Gov. Larry Hogan and revised by a House committee. All of the opponents were Republicans, Michael Dresser reports for the Sun.

SENATE TO VOTE ON JUSTICE REFORM: Pamela Wood of the Sun reports that the Maryland Senate is poised to take a final vote today on a sweeping bill that aims to reduce prison populations in order to save money for crime prevention and drug treatment.Under a concept known as “justice reinvestment,” the bill tackles dozens of changes to the state’s criminal justice system.

MORGAN STATE BILL MOVES FORWARD: A bill to provide Morgan State University with $3 million over three years to help bring university research projects to the marketplace was approved by the Maryland Senate by a 37-8 vote Wednesday, Daniel Leaderman of the Daily Record reports.

SENATE OKs MOTTO CHANGE, FANTASY SPORTS BILL: Maryland’s senators approved bills Wednesday that would change the translation of the motto on the state’s seal and set up a voter referendum on online daily fantasy sports games, reports Pamela Wood in the Sun.

SEX ASSAULT AWARENESS: Alessia Grunberger of MarylandReporter.com writes that advocates and victims convened in Annapolis on Wednesday to testify before the Senate education committee on a measure to raise awareness about sexual assault and abuse in schools.

STRIPPING PARENTAL RIGHTS: The Senate Judicial Proceedings Committee might be the last significant hurdle to long-stalled legislation to make it easier for judges to strip parental rights from a mother or father who conceived the child through non-consensual intercourse, Steve Lash of the Daily Record reports.

CHARGE EXPUNGEMENT: Crimes a defendant was charged with but never convicted of will be shielded from online view under an expungement bill that passed the House of Delegates last week, but advocates say the amendments made in committee diminish the bill’s effect, Heather Cobun of the Daily Record reports.

GENERAL ASSEMBLY THUS FAR: Sheilah Kast of WYPR-FM hosts commentator Barry Rascovar and WYPR statehouse reporter Rachel Baye to looks at the action in the General Assembly, which wraps up its session in less than three weeks. What bills still have a chance to pass? What effect have testy exchanges between the Republican governor and Democratic leaders had on legislation?

DELANEY PRESSES HOGAN ON TRUMP: Erin Cox of the Sun report that a mobile billboard rolled into Annapolis Wednesday with a challenge for Gov. Larry Hogan: “Will you support Trump as the Republican nominee?” The opposite side proclaims “silence is an endorsement” of brash billionaire Donald Trump, who increasingly appears likely to become be his party’s nominee for president. 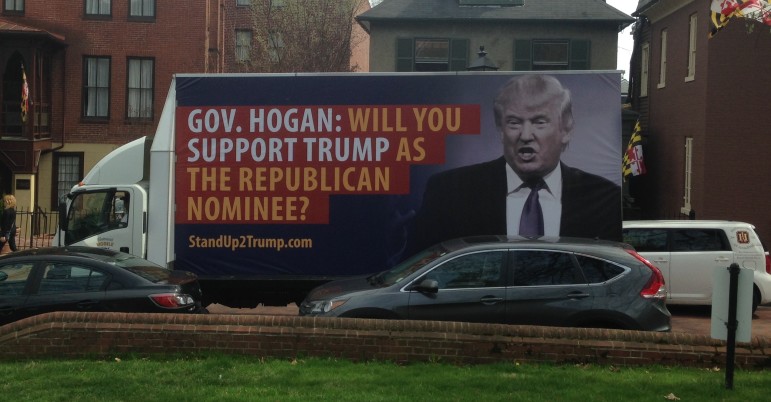 Photo by Friends of John Delaney via MyMCMedia.

2nd EDWARDS-VAN HOLLEN MATCHUP: Reps. Donna Edwards and Chris Van Hollen, the two candidates in the hotly contested Democratic primary race for Maryland’s open U.S. Senate seat, have agreed to two more debates, with just over a month to go before the April 26 primary. They debated for the first time last Friday and are scheduled to square off again in Baltimore City on Friday, Arelis Hernandez of the Post writes.

POST ENDORSES MATTHEWS: The Washington Post editorial board endorses Kathleen Matthews — a longtime TV journalist and, more recently, corporate executive — for Congress, writing that “Our preference … boils down to our belief that in Congress, she would be more pragmatic and less doctrinaire than the left-leaning Mr. (state Sen. Jamie) Raskin, whose passionate liberalism is unsurpassed in Annapolis.”

RASKIN AD: State Sen. Jamie Raskin is joining the advertising war unfolding in the pricey contest for Maryland’s 8th Congressional District, launching a series of television commercials this week that portray him as the only progressive in the race for the Democratic nomination, writes John Fritze for the Sun. The article is topped by an ad.

4th DISTRICT DEBATE: As the race for Rep. Donna Edwards’ seat in the House of Representatives heats up, money and its influence on politics are framing voters’ opinions as to who should replace the veteran representative. Three Republicans and six Democrats took to the stage Wednesday night to debate the issues facing both the 4th Congressional District and the country at large, Phil Davis reports for the Annapolis Capital.

ON IVEY: Growing up in North Carolina in the 1960s, Glenn F. Ivey saw firsthand how the civil rights movement changed his home town of Rocky Mount, writes Arelis Hernandez in the fourth of a series of profiles of candidates for the 4th Congressional District. “The schools desegregated. You could shop in stores and go into restaurants where you hadn’t been allowed,” Ivey, 55, recalls. “I saw these people making a difference. And I wanted to be one of those who could help people in the same way.”

FIVE THINGS ON FOGG: Here’s five things you should know about Matthew Fogg, who is running for Congress from Maryland’s 4th District. He was profiled in the Post yesterday.

GOP MAYOR HOPEFULS HAVE HOPE: The five Republicans running for mayor of Baltimore City haven’t reported raising a single dollar. Only one has a working website. But, writes Luke Broadwater for the Sun, they’re hoping that voters in deep-blue Baltimore City, which is reeling from record homicides and the first riots in half a century, are willing to give the GOP a chance anyway.

DONOR CHECKS BOUNCE: Luke Broadwater of the Sun reports that more than $60,000 in campaign checks to state Sen. Catherine Pugh have bounced, her campaign for Baltimore City mayor has announced. The checks have been under scrutiny in recent weeks. Most come from two small city blocks.

BLAINE YOUNG CHARGED: Blaine Young, the former president of the Frederick County Board of County Commissioners, has been charged with four prostitution-related counts in Anne Arundel County, according to court documents. Staff at the Frederick News Post report that Anne Arundel County police said Young and five other people were arrested and charged as part of a police prostitution sting on Feb. 18 at a hotel near BWI airport. The long article goes into his history …