PLEA FOR UNITY: Gov. Martin O’Malley sent an email pleading for Democratic Party unity in coming together to solve the budgeting impasse, calling the Republican response to calls for a special session “even worse,” writes The Post’s John Wagner.

The Daily Record’s Alexander Pyles blogs that the email strongly hints that there will be a special legislative session to resolve budget issues.

SPECIAL SESSION: Daniel Leaderman of the Gazette sums up where things stand on the lack of consensus for a special session.

Other states were facing similar budget problems or worse, Dan Leaderman writes in the Gazette. Virginia passed a budget on its fourth try.

Gazette columnist Blair Lee predicts Senate President Mike Miller will be the one who blinks in the confrontation over the special session.

TAXPAYERS CAN’T WIN: A staff editorial in the Frederick News-Post laments the lack of real compromise from the General Assembly, remarking that there is no way the taxpayers can win from the “doomsday budget,” which forces millions of spending cuts or a special session, which will raise taxes.

MONTGOMERY’S BETTER OFF? Montgomery County Executive Isiah Leggett said on WTOP radio’s “Ask the Executive” program Thursday that the county is better off under the “doomsday budget” than with the budget lawmakers were trying to pass, reports The Examiner’s Rachel Baye.

RALLY AGAINST TUITION INCREASE: University of Maryland College Park students rallied against tuition hikes included in the “doomsday budget” that could increase in-state undergraduate tuition by about $865, reports The Diamondback’s Jim Bach.

NO MORE SCHOLARSHIPS: Nearly $12 million in scholarship money that can be more or less freely given by lawmakers to students in their own districts is one of the programs that would be eliminated under the “doomsday budget,” writes The Washington Times’ David Hill.

The Associated Press’s Alex Dominguez reports in the Salisbury Daily Times that there has been an unusual drop in the number of adult female crabs.

The Examiner’s Ben Giles writes that this is the fourth year in a row that the crab population has increased.

FRACKING DELAY: Since the General Assembly didn’t pass legislation funding studies on natural gas drilling in the Marcellus shale, members of a task force looking at drilling issues wonder if a delay in potential drilling could be imminent, according to an Associated Press story in the Daily Record.

DIXON ROASTED FOR CHARITY: Former Baltimore Mayor Sheila Dixon and the scandals that led to her resignation were featured in a roast for charity, reports Julie Scharper of The Baltimore Sun.

CARROLL BUDGET: It took yelling, debating and compromising, but Christian Alexandersen of the Carroll County Times reports that the Carroll County Board of Commissioners approved a proposed budget that includes more funding for education, raises for county employees and a decrease in the property tax rate.

PRESS ASSOCIATION HALL OF FAME: Lou Panos, who covered 40 sessions of the Maryland General Assembly during his 60 years as a working journalist, was inducted in the Hall of Fame of the Maryland-Delaware-D.C. Press Association Thursday night. MarylandReporter.com’s Len Lazarick, who was one of many to nominate Panos, writes about Panos’ long career.

PRISON CELL PHONES: Maryland is testing out a new technology that will disable cell phones smuggled into prisons, Danielle Gaines reports in the Gazette.

6TH DISTRICT: Katherine Heerbrandt in the Gazette describes how Democrat John Delaney is ahead in fundraising and his own polling in the 6th Congressional District race to unseat incumbent Republican Rep. Roscoe Bartlett. 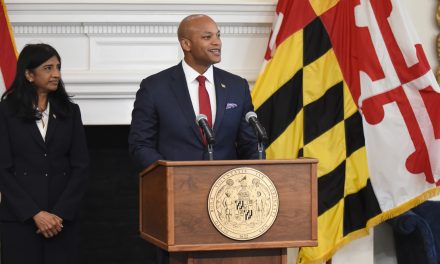