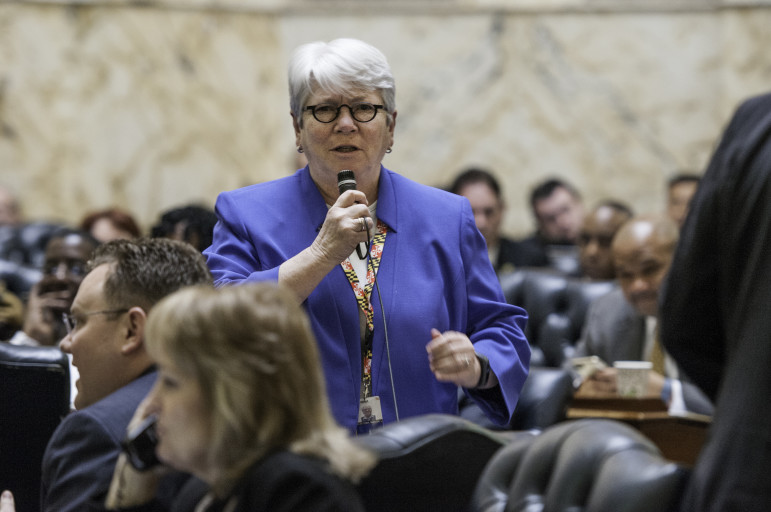 In Harrisburg on Wednesday, a reluctant Democratic governor and the Republican legislature have finally come to an agreement on a budget — not for next year, but for the final three months of this fiscal year.

A year of rancor and dispute came close to bankrupting schools and social agencies as the legislature refused to pass Gov. Tom Wolf’s proposed tax hikes for a major increase in school aid.

At the Maryland State House on Wednesday, the Democratic House of Delegates voted overwhelmingly 133-5 to approve Gov. Larry Hogan’s $42 billion budget, with bipartisan praise of a bipartisan process.

“I really don’t miss those stacks of amendments” from years past as the Republican minority sought to whack away at Gov. Martin O’Malley’s spending plans. 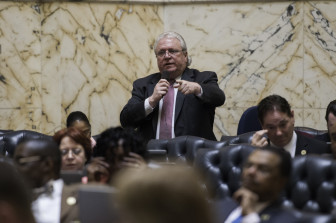 “For two years in a row we have a budget with no tax increases,” said Del. Tony O’Donnell, R-Calvert, the former minority leader who often led the charge against Democratic spending. (McIntosh said it was “the third year” in a row, since the legislature passed no tax hikes in the 2014 election year.)

“This is something the citizens of this state wanted — compromise, consensus, bipartisanship,” Kipke said. “We have shown the people of Maryland consensus and good public policy with fiscal restraint.”

“Our budget is healthy,” he said. “Maryland has begun to rebound economically,” with incomes growing, real job creation and real economic growth.

“Maryland is headed in the right direction,” Kipke said.

Hogan joined in the praise, thanking McIntosh, House Speaker Michael Busch and the entire House for their “hard work” while expressing some reservations about the final product.

“For the first time in years, the budget also delivered 100 percent of the aid that local jurisdictions had anticipated,” Hogan said in a statement. “Maryland’s budget process works best when the executive and legislative branches act in a bipartisan fashion toward a common goal. Although we have concerns about the actions taken to reduce the Rainy Day Fund, I remain committed to working with the House and Senate leadership to build upon the progress we have made in the last year.”

The Senate had already cut the Rainy Day fund by $80 million, fencing off the money for its own spending priorities. But at $1 billion, the Rainy Day fund is still $150 million higher than required by law. The budget surplus is estimated at over $415 million.

“With the operating budget now passed in both chambers, I urge the legislature to continue to ensure that the state operates within its means and remain focused on meaningful dialogue about mandate and tax relief for all Marylanders,” Hogan said.

The Senate has already voted for a tax relief package different than what Hogan had proposed. The House has only approved the part of the package for low-income earners, the Earned Income Tax Credit, and House leaders are unlikely to approve any other tax cuts or reduce spending mandates. They may actually send Hogan new spending mandates.

But with all the current spending mandates funded, there is no cause for last year’s budget contention that caused Hogan to ask Republican legislators to vote against the final budget agreed to by a conference committee to resolve differences between the House and Senate.

A conference committee still is needed this year, but the differences are minor. 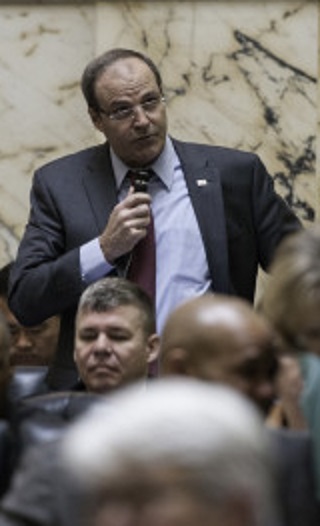 “This year’s budget is a good move by the governor in a four-year game of fiscal chess with liberal legislators,” McMillan told the House. “He’s reduced spending in non-mandated areas; he’s fully funded all dedicated funds; and he’s done it without tax increases.”

“There’s no BURFA,” said McMillan, referring to the Budget Reconciliation and Financing Acts used for over a decade to adjust spending mandates and transfer funds. That means there was “no opportunity for liberals to use the BURFA as leverage to get what they want. Liberals can fence funds, but the governor doesn’t have to spend them, and if he doesn’t, our surplus funds will grow – and so will the pressure for a significant tax cut. I like the way the chessboard looks – ‘Check.'”

A session ‘we can all be proud of,’ Hogan, Busch, Miller agree