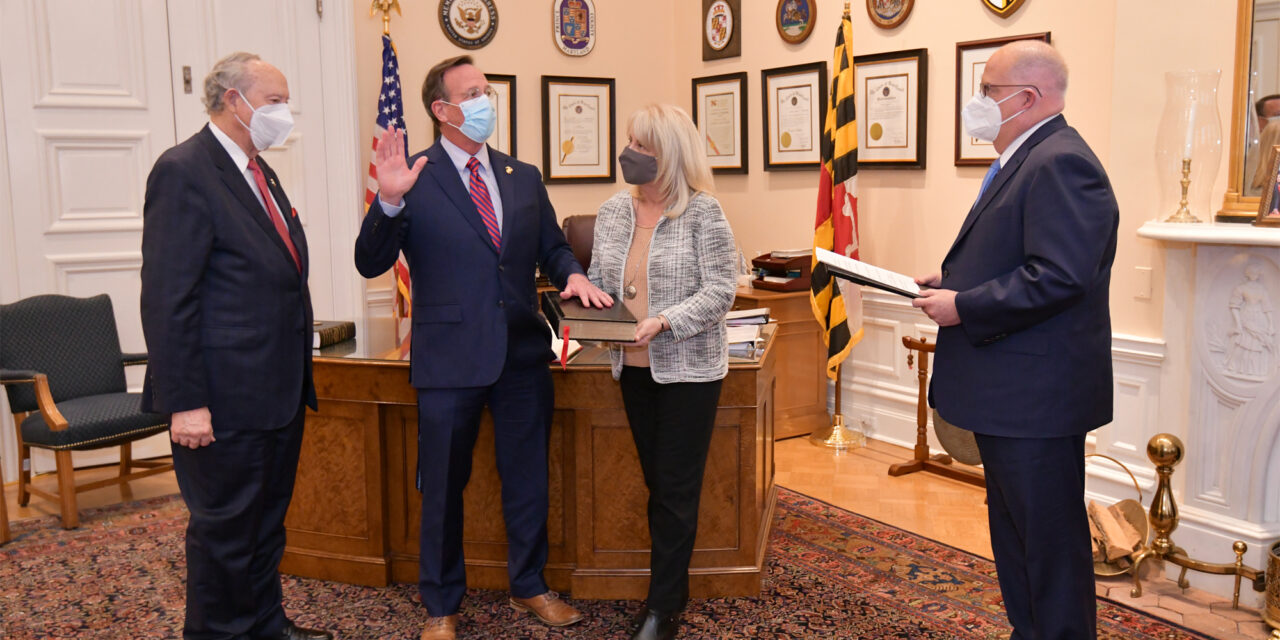 James Ports, with his hand raised, is sworn in as secretary of transportation. Photo by Joe Andrucyk of the Governor's Press Office.

HOGAN PROPOSES USING SURPLUS TO AID RETIREES, LOW EARNERS, BUSINESSES: Gov. Larry Hogan is proposing spending a chunk of Maryland’s budget surplus on a series of tax cuts for retirees, the state’s lowest earners and manufacturers that he hopes the Democrat-controlled Maryland General Assembly will agree to pass during the upcoming legislative session. Bryn Stole and Pamela Wood/The Baltimore Sun.

PAID FAMILY LEAVE: Nine states and the District of Columbia have enacted paid family leave policies, and Maryland could be next if the legislature passes the Time to Care Act this year, sponsored by Sen. Antonio L. Hayes (D-Baltimore City) and Del. Kris Valderrama (D-Prince George’s). The measure would allow all Marylanders, both part-time and full-time employees who have worked 680 hours, to take 12 weeks of paid leave following childbirth or to take care of themselves or a family member experiencing serious health issues. Elizabeth Shwe/Maryland Matters.

OPINION: MIND THOSE CHILD SUPPORT GUIDELINES: Compared to other states, Maryland is out of compliance when it comes to reviewing its child support guidelines, as required by state law opines child support reform advocate Howard Gorrell in a column for Maryland Reporter. The Child Support Administration must review the guidelines every four years to ensure that their application determines appropriate child support amounts. 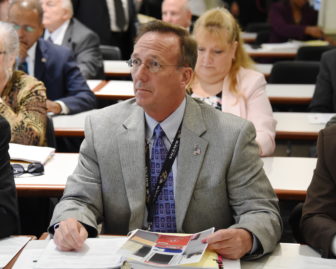 EEOC LAWSUIT AGAINST MDOT CLAIMS GENDER DISCRIMINATION: The U.S. Equal Employment Opportunity Commission has alleged in a new lawsuit that the Maryland Department of Transportation State Highway Administration discriminated against a male employee by paying him lower wages than his female colleagues because of his gender. Madeleine O’Neill/The Daily Record.

MO CO SCHOOLS ASK STATE FOR NATIONAL GUARD TO DRIVE BUSES: One day after dozens of school bus routes were taken out of service due to driver shortages caused by COVID-19 call-outs last week, Montgomery County officials went to the state asking for help. They asked for support from the Maryland National Guard to provide 200 bus drivers. Glynis Kazanjian and Kevin Lewis/WJLA-TV News.

SEN. REILLY EYES CHANGES IN CONSTITUENCY: After three terms serving in the Maryland Senate, Crofton Republican Ed Reilly will be going into this election cycle campaigning to represent a very different group of constituents in District 33 if the Legislative Redistricting Advisory Commission gets its proposed map of legislative districts passed. Dana Munro/The Capital Gazette.

DUTCH AT HOME WITH MILD COVID SYMPTOMS: U.S. Rep. Dutch Ruppersberger said Tuesday he has tested positive for COVID-19, part of a wave of cases in Congress since the omicron variant began surging across the country. The Baltimore County Democrat, who turns 76 on Jan. 31, said in a statement that his positive result came Monday night and that he was quarantining at home with mild symptoms. Jeff Barker/The Baltimore Sun.

COVID CONTINUES TO STRESS CARROLL HOSPITALS: As the latest surge of COVID-19 cases continues to impact Carroll County, the health department reported four deaths this week due to the virus. On Tuesday, Carroll Hospital had 180 total patients, 63 of whom have tested positive for COVID-19. In the Critical Care Unit, 15 patients, all of whom are COVID positive, were being cared for, with all but two on ventilators. Three of those 15 patients had been vaccinated against COVID-19. Madison Bateman/The Carroll County Times.

HOWARD CANDIDATES DENIED MATCHING FUNDS ON TECHNICALITY: A technicality of language has resulted in Howard County candidates being denied matching campaign funds this election season. On Monday night, the Citizens Election Fund Commission met to discuss the matter, which was brought to its attention by Howard County Council member Deb Jung, who is seeking re-election. Katie V. Jones/Baltimore Sun Media.