RESTRICTING RENEWABLE SALES: More than one-third of the renewable electricity Marylanders buy comes from incinerating trash, that send greenhouse gases and toxic pollutants into the air, reports Scott Dance in the Sun. Environmentalists say that amounts to subsidizing pollution, and they want the state to redefine what energy sources it considers “renewable.” A General Assembly bill proposing to significantly restrict who can sell in a regional renewable-energy marketplace has stoked a conflict over what strategy is best for the state’s air quality in the long run.

INCOME TAX CUT BACKED: Maryland voters of all parties favor cutting the state income tax rate by 10% and raising the cigarette tax by $1 a pack, a new Gonzales Research poll found. Len Lazarick of MarylandReporter.com writes that Gov. Larry Hogan continues to gain high job approval ratings of almost 70%, with even a majority of Democrats approving his performance. And the Democratic race to succeed Barbara Mikulski in the U.S. Senate continues to be neck and neck between Reps. Donna Edwards at 41% and Chris Van Hollen at 42%.

HOGAN TO HOLD NOON PRESSER:  Gov. Larry Hogan will hold a news conference at noon today in Annapolis as tensions between his administration and the leadership of the General Assembly continue to mount, reports Michael Dresser in the Sun. The governor will take questions as the House Appropriations Committee prepares to hold a hearing in the afternoon on one of Hogan’s top priorities of the legislative session — a bill that would relieve the chief executive of spending mandated by the legislature when there is a revenue shortfall.

FEE CUTS CAUSE CONCERN: Lawmakers and others expressed concerns for several fee reductions proposed by the governor, including one that helps law students pay their student loans in return for service to low-income and underserved populations. Bryan Sears of the Daily Record reports that the reductions, which need legislative approval, include cuts to fees for licenses, including handgun qualifications, home improvement licenses, birth and death certificates and other items set in statute. They would total about $100 million over five years.

CITY LIQUOR BOARD DUST-UP IN ANNAPOLIS: The conflict over the direction of the city liquor board deepened Monday as a Senate committee refused to confirm three of Gov. Larry Hogan’s appointees as commissioner and a powerful senator introduced legislation that could force him to appoint new members, write Michael Dresser and Pamela Wood in the Sun. Meanwhile, Hogan withdrew the name of his lone appointee as an alternate commissioner. That appointee was the only one of the Republican governor’s board appointees who had not drawn opposition from senators.

HOWARD KEEPS STORMWATER FEE: In a 4-1 vote on Monday, the Howard County Council struck down a measure to eliminate the county’s controversial stormwater remediation fee, dubbed the “rain tax” by opponents, writes Fatimah Waseem in the Howard County Times.Introduced by Howard County Executive Allan Kittleman and Councilman Greg Fox, the measure would have slashed the stormwater fee in half by fiscal year 2017 and eliminated it by fiscal year 2018. The fee currently brings in $10 million annually.

BROWN’S COMEBACK: In a sympathetic piece for Center Maryland, Josh Kurtz writes about former gubernatorial candidate, former Lt. Gov. Anthony Brown, who is now running for Congress from the 4th. “There really isn’t anything more American than picking yourself up after a fall and plowing ahead. That may make Brown more relatable – and more appealing – than anything else,” Kurtz concludes.

TRONE SEEKS VOTE MACHINE OVERHAUL: Lawyers for congressional candidate David Trone are demanding that Maryland election officials overhaul the use of touch-screen machines that are to be used by disabled voters in the April primary but are not programmed to display all candidates on a single screen, Fenit Nirappil of the Post reports.

WEALTH IN THE 8TH: Bill Turque reports for the Post that wine retailer David Trone, who is self-funding his campaign for the Democratic nomination for Congress in Maryland’s 8th District, earned at least $14 million in salary and income from partnerships and investments in 2015, according to a financial disclosure report filed with the House of Representatives.Former news anchor and Marriott executive Kathleen Matthews and her husband, MSNBC “Hardball” host Chris Matthews, reported assets of between $22.5 million and $61.3 million in 2014,

LEGISLATIVE INEXPERIENCE: At a recent 8th Congressional District candidates forum, Esther Siegel asked six of the nine candidates who have never held elective office — David Anderson, Dan Bolling, Will Jawando, Kathleen Matthews, Joel Rubin and David Trone — why did these hopefuls think Congress was an entry-level position for those without legislative experience? Bill Turque writes the story for the Post.

POST ENDORSES VAN HOLLEN: The editorial board for the endorses Chris Van Hollen for the U.S. Senate, writing that he and Donna Edwards offer Maryland voters a stark choice, and not only a stylistic one, between the courtly, understated Van Hollen and the forthright, unwavering Edwards. The main difference is that Van Hollen — pragmatic, detail-oriented, agile — could be a real force for accomplishment. By contrast, Edwards, whose many attributes do not include a gift for team play, would reinforce Congress’s tendency toward stalemate along partisan lines.

EDWARDS BOOKS AIRTIME: Rep. Donna Edwards’ campaign for Senate has reserved airtime on a Baltimore broadcast television station for next month, potentially marking the first time the Democrat will run her own television ads rather than relying on an outside group, writes John Fritze in the Sun.

IRETON OUTLINES PRIORITIES: Democratic candidate for Maryland’s 1st Congressional District Jim Ireton outlined his priorities while speaking Saturday at the Caroline County Democratic Club’s annual meeting, writes Dusting Holt in the Cecil Whig. Ireton, an Eastern Shore native, is a former two-term mayor of Salisbury and now city councilman for the city. He oversaw a 50% drop in the violent crime rate over six years in Salisbury, improved the health of the Wicomico River and left the city with a $16 million surplus, according to his campaign. 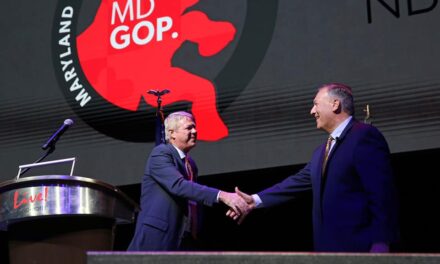