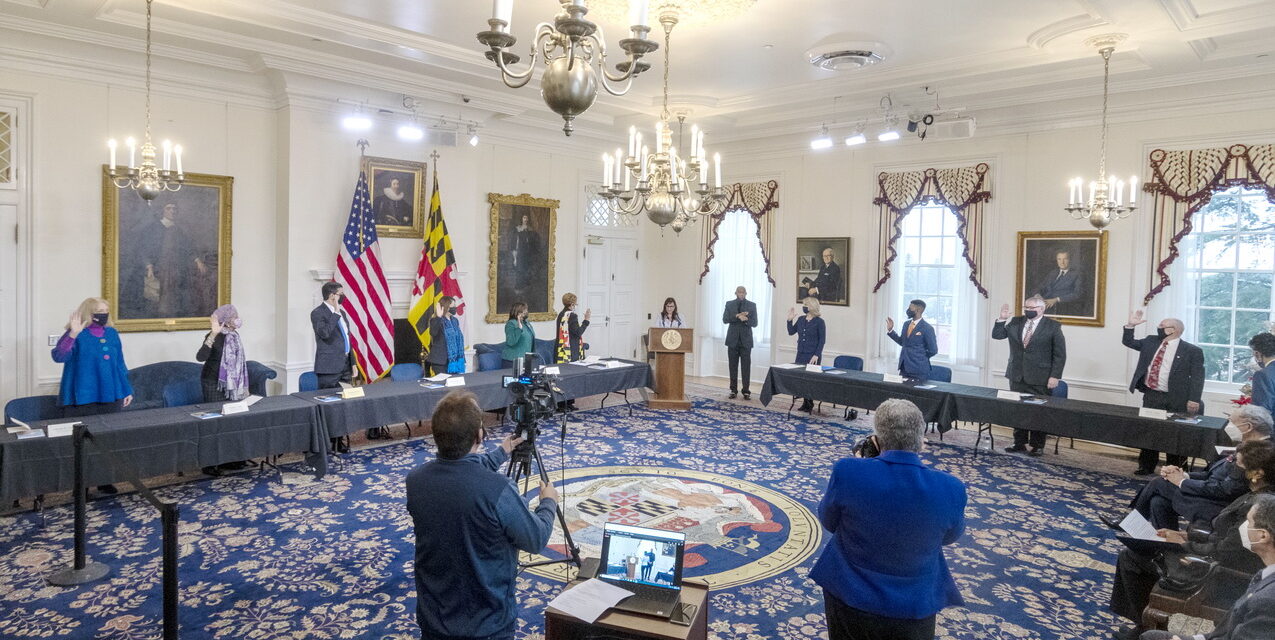 Maryland's electoral college members take their oath of office Monday. As in all oaths of office here and around the nation, they swear to "support the Constitution of the United States." Governor's Office Photo

VACCINES EXPECTED TO ARRIVE THIS WEEK: As coronavirus cases continue to rise, doses of a highly anticipated vaccine could start arriving in Maryland as soon as this week. Gov. Larry Hogan said during a news conference that the first shots are reserved for hospital workers and nursing home residents and employees, McKenna Oxenden and Ben Leonard of the Sun report.

PERDUE SEEKS VACCINE PRIORITY FOR WORKERS: Poultry processor Perdue Farms has asked Gov. Larry Hogan to give the state’s meat and poultry workers priority for the coronavirus vaccine that’s being delivered to hospitals and nursing homes this week, Lorraine Mirabella of the Sun reports. The CEO of Salisbury-based Perdue wants its 2,196 Maryland processing plant workers given priority in the next phase of COVID-19 vaccine distribution.

CAN EMPLOYERS REQUIRE VACCINATIONS? When the COVID-19 vaccine becomes more widely available in the U.S. next year, employers may face a tough question: whether they should – or even can – require their staff to get vaccinated. Sarah Kim reports on the issue for WYPR-FM.

BA CO BARS CITED FOR NON-COMPLIANCE: Bars in Perry Hall and Kingsville were among the businesses cited Monday afternoon by Baltimore County’s Board of Liquor License Commissioners for not complying with coronavirus-related orders, Taylor DeVille of the Sun Media Group reports.

FROSH JOINS FIGHT AGAINST PANDEMIC INCOME SCAMS: The Maryland attorney general’s office said Monday it has joined a nationwide crackdown on deceptive income schemes, and taken action to halt a number of questionable investment opportunities, Jeff Barker of the Sun reports. Income scams have been soaring during the coronavirus pandemic, Attorney General Brian Frosh and officials of the U.S. Federal Trade Commission said during a call announcing “Operation Income Illusion.”

OPINION:DON’T OVERTURN HOGAN VETO OF DIGITAL AD TAX BILL: In an op-ed for Maryland Reporter, Rebecca Snyder of the MDDC Press Association, Matthew McDermott of the American Advertising Federation of Baltimore and Lisa Reynolds of the Maryland-DC-Delaware Broadcasters Association urge the General Assembly not to override Gov. Larry Hogan‘s veto of a first-in-the nation tax on digital advertising, saying that it would be “a ‘gut-punch’ to Maryland businesses and consumers at a time when they’re already financially vulnerable.”

WENDI WINTERS RECEIVES HIGHEST CIVILIAN HEROISM HONOR: The Capital journalist Wendi Winters has been posthumously awarded the highest honor for civilian heroism in the U.S. and Canada, the Carnegie Hero Fund Commission announced Monday. Lilly Price of the Capital Gazette reports that survivors credit Winters for saving their lives when she picked up a trash can and recycling bin and charged a gunman who blasted through the glass doors of the Capital’s office on June 28, 2018. Winters was shot and killed trying to protect her colleagues.

PROGRESSIVE MAYOR TO CHALLENGE HOYER: Six weeks ago, U.S. Rep. Steny H. Hoyer (D-Md.) romped to re-election, winning a 21st term in the U.S. House of Representatives. This week, Colin Byrd, the 28-year-old mayor of Greenbelt, declared his intentions to challenge the veteran lawmaker on Facebook. Byrd cast himself as a progressive alternative to the 81-year-old House majority leader, Bruce DePuyt of Maryland Matters reports.