Senators on the budget committee on Tuesday began doing the only things they can do with Gov. Larry Hogan’s $42.3 billion budget — cutting it around the edges and fencing off money for special purposes. 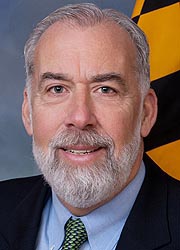 That included a $58 million cut in Medicaid reimbursement to health care providers — based on lower enrollment estimates — and cutting part of Hogan’s modest legislative agenda, $3 million for Early Graduation Scholarships for students who complete high school in three years or less.

A budget subcommittee also rejected a Hogan plan to outsource dietary jobs at some state hospitals, a move opposed by AFSCME, the public employee union.

After the decision by the health and human services subcommittee, Health Secretary Van Mitchell said, “We’d be fine with $20 to $25 million” in cuts to Medicaid, “we’ve got some outstanding initiatives to work on” that the rest of the money may be needed for, including a response to a federal inspector general report.

Mitchell was also disappointed in the refusal to approve $2.1 million privatizing the food service jobs at Springfield Hospital Center and two institutions for children and adolescents. He said any savings could be used to fund nursing care or medicine.

There were small trims of $100,000, $500,000 and $1 million in many other areas of the massive budget, but none the committees considered especially controversial.

The $3 million for the Early Graduation Scholarships will be allocated to other education programs.

The education subcommittee also fenced off $3.2 million in funding to relocate the offices of the University System of Maryland to Baltimore, contingent on passage of two bills, SB1052 and HB1607, designed to ensure closer collaboration between the flagship campus in College Park and the professional schools in Baltimore.

The full Senate Budget and Taxation Committee is scheduled to meet Thursday to finish its work on Hogan’s spending plan. Then the amended budget is expected to move to the Senate floor on Monday, with a final vote next week before it moves to the House, which has already held scores of hearings on parts of the budget.

The state Board of Revenue Estimates, chaired by Comptroller Peter Franchot, is scheduled to meet Wednesday afternoon to review the estimates of incoming revenues. That could affect budget deliberations if there are any reductions.