TRANSPORTATION BILLS STIR CONTROVERSY: Democrats on Tuesday announced a transportation agenda designed to shed light on funding decisions and make suburban jobs more accessible to workers who live in cities and don’t own cars. The legislative package would also require the state to replace an aging and frequently congested Potomac River bridge crossing in Southern Maryland and create a citizen-oversight board for the Maryland Transit Administration, Josh Hicks reports for the Post. 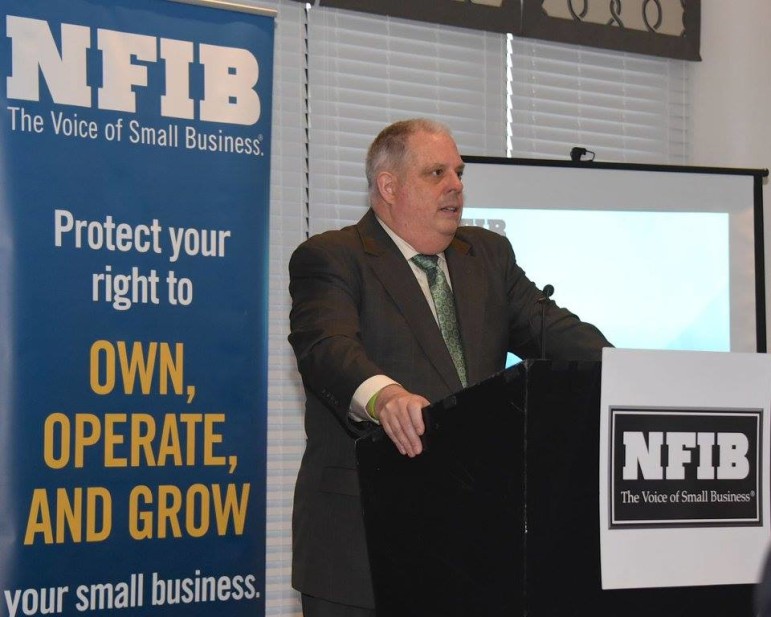 Gov. Larry Hogan spoke Tuesday to about 100 members of the National Federation of Independent Business in Annapolis. He promised them: “You have a friend in the governor’s mansion, you have a seat at the table … you have a tireless advocate” for small business owners. Photo by the Governor’s Office.

WITHHOLDING TAX REFUNDS: Josh Magness and Lexie Schapitl of CNS report in MarylandReporter.com that  the comptroller’s office would be able to withhold tax refunds from individuals who have outstanding arrest warrants throughout the state, under a pair of Maryland bills designed to provide criminal suspects with a financial incentive to turn themselves in.

‘BODY SAFETY’ EDUCATION: Under Maryland’s version of Erin’s Law, now before a House committee, the state Board of Education and nonpublic schools that receive state funding would be required to develop and implement an age-appropriate curriculum on the awareness and prevention of sexual abuse and assault. The program would be part of a school’s health-education program, reports Ovetta Wiggins for the Post.

ARUNDEL ED BOARD CHANGES: As a few Anne Arundel County Democrats work on proposals to get more minority representatives on the school board, some Republicans are backing a bill to shift member decisions to voters. Del. Sid Saab, R-Crownsville, recently submitted a bill that would convert the Anne Arundel County Board of Education to a semi-elected body, Elisha Sauers of the Annapolis Capital reports.

HOGAN HIKES ARTS FUNDING: Gov. Hogan is proposing $20.3 million for the Maryland State Arts Council in the 2017 fiscal year, a $700,000 increase, according to WBAL-AM. Also in the proposal is a measure to permanently transfer $2 million from a fund for the preservation of cultural arts to that annual appropriation.

ANGEL INVESTOR TAX CREDIT: Don Fry of the Greater Baltimore Committee, writing in Center Maryland, says the GBC is supporting proposed legislation that would provide a nonrefundable tax credit equal to 50% of an investment made by a qualified investor in a qualified innovation business. Under the proposed Angel Investor Tax Credit bill, the credit would be capped at $50,000 for an individual investor and $100,000 for a married couple or small business or “pass-through” entity making the investment.

MORE PLAINTIFFS IN REDISTRICTING CASE: Maryland residents challenging their state’s 2011 redrawing of its congressional districts are adding more plaintiffs to their case. A motion submitted in the case Tuesday adds six new plaintiffs to the original three. The case was initially thrown out, but the U.S. Supreme Court ruled in December that was premature, Jessica Gresko of the AP reports in the Sun.

GOVERNORS BALL FUNDER: A Republican governor in a Democratic state will heading the annual Governor’s Ball in Annapolis Thursday, but it won’t be Larry Hogan, writes Rick Hutzell in the Annapolis Capital. Massachusett’s Gov. Charlie Baker will be the keynote speaker. Former Gov. Bob Ehrlich of Annapolis is listed as a special guest.

SZELIGA TO ATTEND GOV’S BALL: Five Republican candidates for Maryland’s open Senate seat will participate in a debate Thursday at Goucher College, but the presumed frontrunner in the race for the GOP nomination — Del. Kathy Szeliga — is sitting the event out to attend a state party fundraiser, John Fritze of the Sun reports.

GOP SENATE DEBATE: Goucher College will host the first GOP U.S. Senate debate of the 2016 primary season this Thursday, Feb. 18, 7 p.m.  The debate will feature five of the leading candidates for the Republican nomination: Richard Douglas, Greg Holmes, Joseph Hooe, Chrys Kefalas and Dave Wallace. The debate will be moderated by WBAL on-air personalities Derek Hunter and Clarence Mitchell, IV.  The event will also include a period of questions to the candidates from the audience. The debate will take place in Merrick Hall on the Goucher campus, 1021 Dulaney Valley Road, Towson.

COMPLAINT AGAINST VAN HOLLEN: A conservative legal group plans to file a Federal Election Commission complaint against Rep. Chris Van Hollen, alleging the Montgomery County Democrat failed to disclose in-kind legal assistance he received when he sued the government in 2011 in an effort to strengthen campaign finance regulations, John Fritze reports for the Sun.

REAGAN IS CANDIDATE’S HERO: Nancy Lavin of the Frederick News Post profiles Dan Cox, who is running for U.S. Rep. Chris Van Hollen’s 8th Congressional district seat. Cox names President Ronald Reagan as his political hero. Although he lives in Cascade in Washington County — outside the 8th District — the U.S. Constitution requires only that representatives live in the state they represent, not the district.

DELAUTER LAWYER QUESTIONS ETHICS BILL: An opinion from an attorney questioning the constitutionality of parts of an ethics bill being considered by the Frederick County Council postponed a vote on that bill scheduled for Tuesday. Frederick-based lawyer Michelle Martz was hired by Councilman Kirby Delauter, who has publicly disparaged the bill, saying it targets him and his construction business, Jeremy Bauer-Wolf of the Frederick News Post reports.

DEL. CARTER BACKS PUGH FOR MAYOR: Del. Jill Carter, who had been considering a run for Baltimore mayor, on Tuesday endorsed state Sen. Catherine Pugh for the city’s top job, Luke Broadwater reports in the Sun. “Today, I enthusiastically endorse Catherine Pugh for mayor of Baltimore,” Carter said. “She has the vision. She has the record, but, most importantly, she has the passion for the people and shares my passion for justice.” Pugh said she planned to consult Carter as an adviser, particularly on criminal justice reform issues.

24 MAYORAL CANDIDATES: The more than two dozen candidates running for Baltimore mayor welcomed a new competitor to the debate stage Tuesday at the Belvedere Hotel — prominent activist DeRay Mckesson, a last-minute addition to the already crowded field. Before a packed room of about 300 people, the Mt. Vernon-Belvedere Association and Charles Street Development Corp. hosted the first candidates’ forum since the filing deadline to run for mayor about two weeks ago, Luke Broadwater reports in the Sun.

FORMER DELEGATE, SENATOR DIES: Mass for a former state delegate and senator who died last week will be held Friday in Pasadena. Jerome “Jerry” Connell served in the state’s House of Delegates from 1967 to 1970 before moving to the Senate, where he represented District 31 for three terms. Connell died last Wednesday at the age of 88 due to natural causes, writes Ben Weathers for the Annapolis Capital.