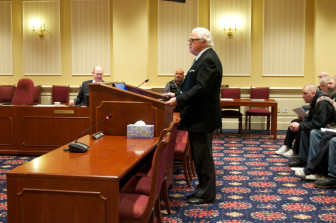 Senate President Mike Miller is proposing legislation to boost the mandatory retirement age of Maryland judges from 70 to 73.

He told the Senate Judicial Proceedings Committee Tuesday: “When we look around us, Delaware and West Virginia have no retirement age. Pennsylvania is now up to 75, the District of Columbia is 74, and Virginia is 73, so we’re completely surrounded by states that have raised the retirement age.”

The bill, SB 502, has 27 co-sponsors, including 7 Republicans. As a constitutional amendment it would ultimately go to voters in a referendum.

A similar bill — originally proposing 75 as the retirement age — unanimously passed the Senate last year and was subsequently sent to the House Judiciary Committee where it ultimately passed after amendments. It never received a final vote before the legislative session ended. However, due to those additional amendments, it would have to have been sent back to the Senate for a vote..

Democrat Miller also said the proposed measure is advantageous to Gov. Larry Hogan, a Republican, because the bill calls for judges who turn 70 before their turn expires to petition the governor to either remain on the bench until age 73 or when their term expires, whichever comes first.

Clements rejected Miller’s argument that Hogan would stand to benefit from the bill’s adoption.

“This bill is the old white guy’s relief act of 2016, and I am shocked that any Republican has signed on to this bill because it actually screws Gov. Hogan and messes with his ability to make appointments,” Clements said.

Clements said that he believes the bill previously failed because it indirectly promotes gender and racial discrimination since it would slow down retirements and therefore new appointments of judges that could be more racially or gender diverse.

“It discriminates and persists in maintaining both gender and racial discrimination in this state,” said Clements.

“It [the bill] was defeated on the House side because of the 24 Circuit Court judges who this applies to in the last two years of Gov. Hogan’s term in office; 20 are white and only 4 are black.”

Clements also complained that Circuit Court judges can only be removed by a two-thirds vote in both the House and Senate or by the Commission on Judicial Disabilities.

“This is a piece of legislation about ages of judges… to deal with this as a partisan matter is inappropriate,” Zirkin said.

“I want to keep this as to a substantive debate, as we do with every issue.”

If approved, judicial pension contributions for sitting judges could decrease $1.4 million in fiscal 2019 if those individuals chose to remain on the bench until age 73, according to the state’s consulting actuary. And those savings to pension liabilities and employer contributions could potentially increase over time as future judges work past the age of 70, since they would be working longer at a more advanced age, reducing the length of time a pension would be paid.