A ROCKY START TO THE SESSION? Maryland Democratic leaders struck a tone of defiance the day before the opening of the 2016 General Assembly session, vowing to fight for schools and other priorities and threatening to block Gov. Larry Hogan’s efforts to change spending rules if they would mean reduced funding for education, reports Ovetta Wiggins for the Post. “Mandate relief is code word for cutting public education,” Senate President Mike Miller told a cheering crowd at the party’s annual legislative luncheon.

ASSEMBLY SNOWBALLS INTO ACTION: Here’s a short animated version of the legislative session by MarylandReporter.com on JibJab. 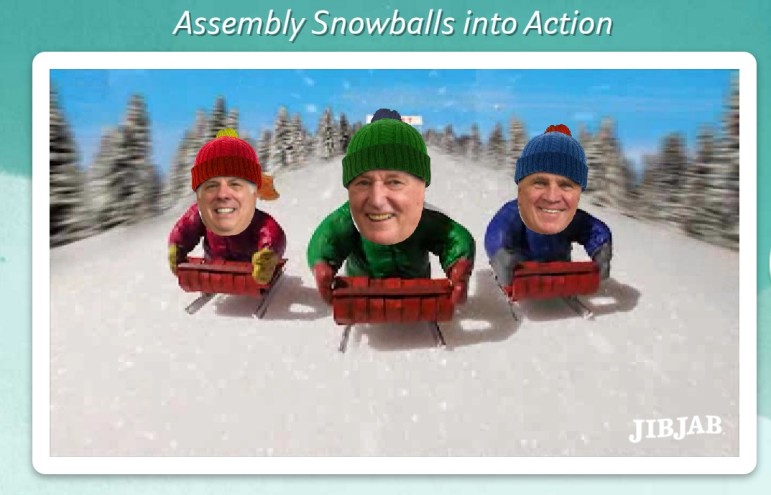 POLICE PUSH FOR POT CONTROL: More than two dozen law enforcement officers and prosecutors rallied in Annapolis Tuesday morning, hoping to persuade Democrats to let them continue seizing small amounts of cash from drug dealers and to keep it a crime to smoke marijuana in public, Erin Cox and Michael Dresser report in the Sun. Police, sheriffs, and state’s attorneys said it would jeopardize public safety if the legislature reversed two bill vetoes issued by Republican Gov. Larry Hogan.

RELIGIOUS LEADERS LOBBY FOR SICK LEAVE LAW: Maryland faith leaders on Monday joined the swelling ranks of sick-leave advocates backing legislation to require employers in the state to pay workers for time off when they are ill — a proposal that has languished in Congress but found limited success at the state and local levels, Josh Hicks of the Post reports.

CATHOLICS BACK ED TAX CREDIT: Buoyed by polling data that shows 7 in 10 Marylanders support the idea, the Maryland Catholic Conference has placed passage of the education tax credit as one of its major priorities for the state’s 2016 legislative session, which begins today, writes Erik Zygmont for the Catholic review. The bill would provide a 60% tax credit of up to $200,000 for businesses that donate to nonprofit student assistance organizations.

DOCTOR-ASSISTED SUICIDE RETURNS: It never emerged from committee for a vote last year, but the push to legalize doctor-assisted suicide in Maryland is back, as proponents and opponents alike are gearing up for a battle over a bill that would allow terminal patients to obtain lethal doses of medication, the Catholic Review’s Eric Zygmont reports.

KAMENETZ MAKES SCHOOLS A PRIORITY: As the Maryland General Assembly meets for the next 90 days, Baltimore County Executive Kevin Kamenetz said he’ll be pushing for money for school construction and road projects, as well as rules for police body cameras, Pamela Wood of the Sun reports. Kamenetz hopes to get $133 million in state school construction money to match county money for expanding and renovating schools, including adding air conditioning.

PASS THESE BILLS: The editorial board of the Frederick News Post begins to weigh in on legislation it would like to see passed by the General Assembly and signed into law by the governor, including a death with dignity bill and one that would mandate seat belts on school buses.

MILLER TAKES THE MIKE: In a column for the Daily Record (that appears to be not behind its formidable paywall), Bryan Sears offers up the ever-quotable Senate Pres Mike Miller and his take on taking a ride on the back roads of Garrett County. He was given the open bed of a pickup truck while the three Republicans he was with were warm inside the cab.

MATTHEWS HITS AIRWAVES: Kathleen Matthews, the former television news anchor running for Congress in Maryland’s 8th Congressional District, is focusing on gun regulations in a new radio advertisement her campaign released on Tuesday. John Fritze of the Sun reports that the radio spot, which the campaign said will air on WTOP, quotes President Barack Obama arguing that the gun lobby is “holding Congress hostage,” a statement he made earlier this month while announcing steps his administration is taking on guns through executive action. An audio of the ad tops the story.

GLASSMAN WON’T RUN FOR SENATE: To the surprise of practically no one in Republican circles, Harford County Executive Barry Glassman announced Tuesday night in his State of the County speech that he would not be running for U.S. Senate, reports Len Lazarick for MarylandReporter.com.

OBAMA TO SPEAK IN BALTIMORE: President Barack Obama and Vice President Joe Biden will address House Democrats at their annual issues conference in Baltimore later this month, John Fritze reports in the Sun.

CARROLL SEES NEED FOR SCHOOL FUNDING: Carroll County’s Board of Commissioners was largely united at its annual State of the County Address: If the county is to move forward, problems like insufficient school funding and impediments to long-term planning must be addressed. In a series of five speeches delivered by each of the county’s five commissioners, many commissioners commended the working relationship shared by board members and the board’s commitment to bettering the county, Heather Norris reports in the Carroll County Times.