HOGAN PUSHES FOR AMAZON HQ2: Gov. Larry Hogan said he will personally lobby Amazon CEO Jeff Bezos to build the company’s massive new headquarters in Baltimore. Erin Cox of the Sun reports that Hogan said he believes pitching Port Covington is the state’s best bet to win the new Amazon campus and its promised 50,000 new jobs. The article is topped by a 2.5 minutes video of the announcement.

HOGAN STRIPS FUNDS FROM CRIME PANEL: A Baltimore city criminal justice panel has been stripped of all state funding just two weeks after a tense meeting with Gov. Larry Hogan. Bryan Sears of the Daily Record reports that Hogan on Friday said he had lost confidence in the Criminal Justice Coordinating Council and its efforts to help make the city safer. The CJCC is fully funded through a state grant of about $272,000. “We’ve been funding it and we don’t feel it’s effective or it accomplishes anything. If they’re not going to focus on crime, violent crime in the city, then we don’t feel the need to fund it anymore,” Hogan said

BLAME THE DEMOCRATS: The editorial board for the Post opines that Gov. Larry Hogan’s (R) refusal to endorse the state’s plan for a new system of school accountability could, critics say, jeopardize millions of dollars in federal education funding. No doubt there is such a risk. But don’t blame Mr. Hogan. The fault lies with Democratic lawmakers who rammed through legislation that gutted the state school board’s authority to set rigorous standards and spur school improvement.

METRO’s LONGTERM MONEY WOE: The Post’s Martine Powers and Faiz Siddiqui report that as Metro General Manager Paul J. Wiedefeld rallies the Washington region to provide $15.5 billion in long-term funding, what’s lost in the debate is that the money is only enough to cover the agency’s most critical capital needs. What’s missing is funding for projects and service that aren’t deemed safety-critical but are important for system reliability and function — things that impact riders on a daily basis.

STATE OPIOID FUNDS DELAYED: Katherine Bonincontri hired five additional staff members to help meet Anne Arundel County’s growing opioid treatment needs. She is hoping for state funding to help underwrite increased staffing costs, writes Phil Davis in the Annapolis Capital. The founder of the Pascal Crisis Stabilization Center is still waiting for word from the state if money will be channeled through the county to the Crownsville nonprofit, despite the fact the state told counties to be ready to implement new or expanded programs potentially funded by the grant by Sept. 1.

KAMENETZ TO ANNOUNCE RUN FOR GOV: Baltimore County Executive Kevin Kamenetz is joining the crowded Democratic field in the race for Maryland governor, Pamela Wood of the Sun reports. Kamenetz plans to launch his campaign Monday morning in Towson, where he has worked as county executive for the past seven years. Kamenetz, 59, said his experience running Maryland’s third-largest jurisdiction will translate to success running the state.

BUT NOT WITHOUT A HITCH: Speaking of Kamenetz’s run for governor, Josh Hicks of the Post reports that a top Baltimore County government official has urged his staff’s “full participation” on Monday in a “very important announcement” by Kamenetz, who is expected to launch a run for governor this week. The email from county IT chief Robert R. Stradling could violate state ethics rules that prohibit officials from using government time and resources to support political activity or using their positions to benefit individuals involved in political campaigns.

WHERE DEM GOV CANDIDATES STAND: Scroll halfway through Josh Kurtz’ Maryland Matters column to get the meat of the matter: He offers an early tip sheet of the Democrats running for governor.

CHALLENGING OLD GUARD: Cory McCray, a first-term delegate from East Baltimore, will attempt to topple a pillar of city politics by challenging Sen. Nathaniel J. McFadden in next year’s Democratic primary. McCray, 34, is a union electrician who credits an apprenticeship program for diverting him from street life, McCray was elected to the House of Delegates from the 45th District in 2014. McFadden, 71, has held elected office for 35 years, Michael Dresser of the Sun reports.

DISTRICT 18 DELEGATE HOPEFUL: Democrat Mila Johns, who is running for state delegate from District 18, chats with Ryan Miner of a Miner Detail blog. Listen to the podcast here. If elected, Johns will push for a Death with Dignity legislation, marijuana legalization, a $15 statewide minimum wage and expanded reproductive rights for women.

LEN LAZARICK ON WYPR: Monday at noon editor Len Lazarick will be on Midday with Tom Hall on WYPR FM 88.1 discussing his new book “Columbia at 50: A Memoir of a City,” You can buy it from MarylandReporter.com, Amazon, Barnes & Noble, Booklocker and other online sites. https://marylandreporter.com/about/buy-columbia-at-50-a-memoir-of-a-city/ 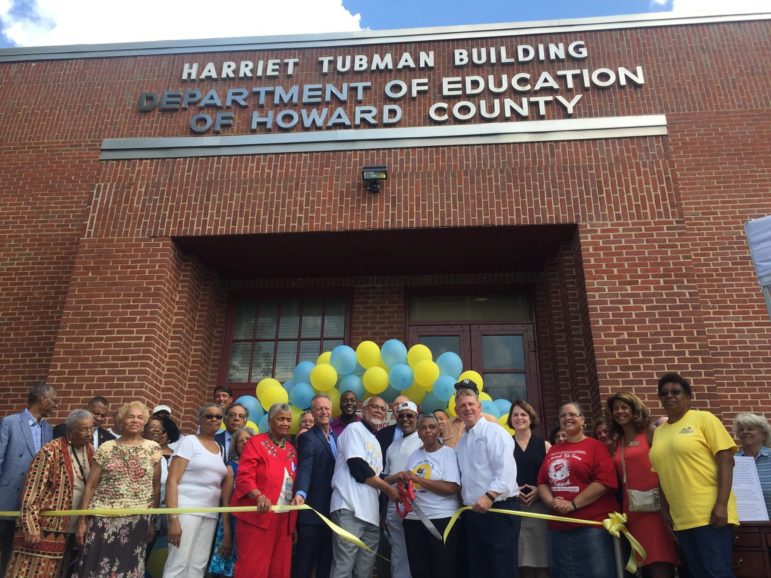 HOWARD COUNTY’S TUBMAN SCHOOL: It was an emotional day Saturday as dozens of alumni returned to Howard County’s former Harriet Tubman High School, a segregated “colored” school, to see it turned into an African-American education and cultural center. Howard County Executive Allan Kittleman got particularly emotional, remembering his father’s role in desegregation as the white president of the county’s NAACP. The ribbon-cutting and celebration was a bipartisan, multicultural affair, with Del. Frank Turner in particular honored for his persistence in advocating for the project. MarylandReporter.com.

NICE SENTIMENT, BAD IDEA: Colin Campbell of the Sun reports that an unknown Good Samaritan who pressure-washed paint off the vandalized Francis Scott Key monument in Bolton Hill inadvertently damaged the monument further by blasting off some of the deteriorated marble, art conservators said Friday. The pressure-washing also appeared to have driven the spray-paint on the monument’s fountain pool deeper into the granite, according to Diane Fullick, a Baltimore-based art conservator hired by the city to inspect and scrub away the vandalism. “You never want to pressure-wash marble,” Fullick said.

FIGHT FOR $15 CONTINUES: Bruce Vail of In These Times writes that, undeterred by a stinging defeat earlier this year, a union-backed push for a $15-an-hour wage is back on in Montgomery County—home to many of the senior civil servants, lobbyists and office workers that run key federal agencies. The Montgomery County Council will begin considering a revised bill later this month to raise the minimum hourly wage from $11.50 to $15, and the outlook is hopeful, says Democratic Councilman Marc Elrich, the chief sponsor.

CANDIDATES’ ‘ISSUES:’ Democratic candidate for Annapolis mayor Gavin Buckley violated immigration law when he overstayed his temporary visa after coming to the United States between 1984 and 1985, he told The Capital on Thursday. He offered the information when asked about Annapolis’ position as a potential sanctuary city following passage of a non-discrimination law this year. Chase Cook of the Annapolis Capital writes that Buckley’s violation of the terms of his visa was one of a number of legal issues involving candidates on the ballot Tuesday during the Annapolis primary election. Other issues include state taxes liens, contract disputes and a parking lot accident.

CAPITAL ENDORSES PANTELIDES, BUCKLEY: The editorial board for the Annapolis Capital is endorsing both incumbent Republican Mayor Mike Pantelides and Democratic challenger Gavin Buckley in the primary races.

OOPS, NO, WE GOT IT WRONG: The city of College Park., whose city leaders thought Tuesday they had approved a measure to allow noncitizens to vote in city elections, said that in fact the change did not gain the required votes for approval and was not adopted. The measure, it turns out, needed more “yes” votes than it got. Stephen Hsu of the Post reports that the initial council action came by a 4-to-3 vote after a heated and emotional debate over illegal immigration. But charter amendments such as the voting measure require a supermajority of six votes from the nine-member council.

SCALED ECONOMIC OPPORTUNITY: Seth Grimes, who is seeking one of the four at-large seats on the Montgomery County Council in 2018, writes in a commentary for Maryland Matters that six years ago he called for support for the Takoma Park-Silver Spring Community Kitchen, a facility that would “provide small-scale food entrepreneurs the space to prepare value-added food for public sale…” Now, almost six years later, that kitchen is operating. A grand opening celebration took place on Saturday, Sept. 16.

JOURNALIST HERBERT BRUBAKER, 84, DIES: Herbert Brubaker, 84, a journalist for the “NBC Nightly News” in Washington for 21 years, died July 30 at his home in Rockville, Md. The cause was Parkinsonism, said a son, Kurt Brubaker. Here’s a nice tribute to the longtime journalist from his son, Kurt, published on LinkedIn. He mentions that his father also traveled to China as part of a USIA journalist exchange program that included MarylandReporter.com’s Len Lazarick and Roundup editor Cynthia Prairie.