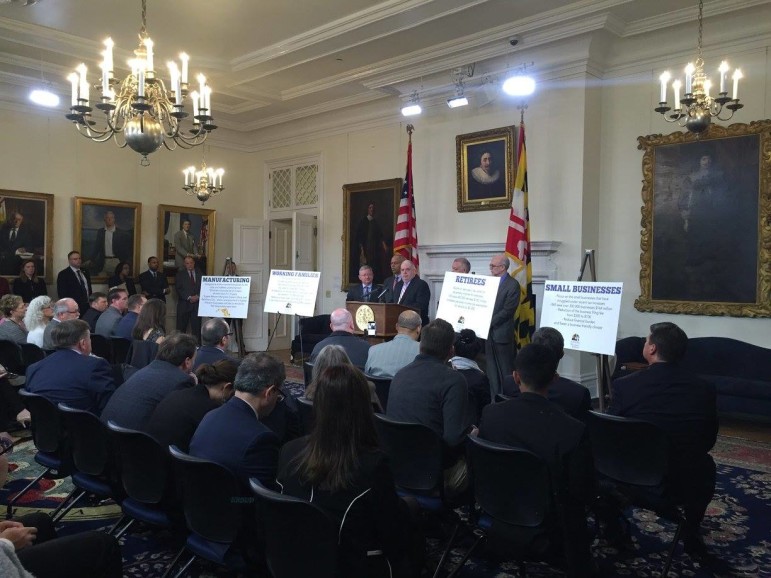 Tax cuts plans Gov. Larry Hogan offered Tuesday were so modest and mainstream that the worst a Democratic Party spokesman could say about them was that two copied proposals by Democrats and Hogan didn’t say how he would pay for them.

The $480 million in tax relief spread out over five years targets tax breaks for new manufacturing, businesses, retirees, and families making less than $53,000.

“I can’t imagine any member of the legislature from any party having a problem with providing tax relief to retirees on fixed incomes, struggling working families, or struggling small businesses,” Hogan told reporters. The people of Maryland are demanding tax relief and “Anyone that isn’t favor of that probably doesn’t deserve to be in the legislature. I can’t imagine how anyone who could vote against common sense measures.”

Individuals who earn less than $65,000 per year and are employed by new manufacturers in Empowerment Zones would pay no state income taxes.

This is similar to a plan offered last session by Sen. Roger Manno, a Montgomery County Democrat, with several Republican co-sponsors. Testimony supporting it came from U.S. Rep. John Delaney, a Democrat who represents Western Maryland, and from Matt Palmer, then a Maryland Chamber of Commerce lobbyist who Hogan recently hired for his own legislative staff.

In response to a reporter’s question, Hogan said his proposal was very similar to one implemented by New York Gov. Andrew Cuomo, whom he noted was a liberal Democrat cutting corporate taxes at the same time Gov. Martin O’Malley was raising them.

Another Hogan proposal would raise the Earned Income Tax Credit for families making $53,000 or less. The tax credit for low and moderate income families has long been popular with Democrats, especially to offset the regressive nature of some tax hikes, such as the 2007 increase in the sales tax.

Hogan also proposed reducing the business filing fee of $300 a year to $100 over the next four years, and reducing other unspecified fees.

The governor also wants to raise the extra $1,000 personal income tax exemption for taxpayers 65 and over that already exists to $5,000 over the next four years.

In a statement, Summers said: “If enacted, this tax package would send a long-overdue signal to residents and entrepreneurs that Maryland is finally a more welcoming place to live or start a business. We are especially heartened to see Governor Hogan endorse our proposal to accelerate the Earned Income Tax Credit, a bipartisan idea to reward work and help Maryland’s working poor climb the ladder of opportunity.”

But the tax cuts  for manufacturing “would undermine existing businesses that pay their fair share toward essential services and they subsidize low-wage work. This won’t create jobs; it will take resources away from schools and other building blocks of a strong economy and true job creation.”

Maryland’s COVID positivity rate drops below 6%, hospitalizations are at their lowest level since April