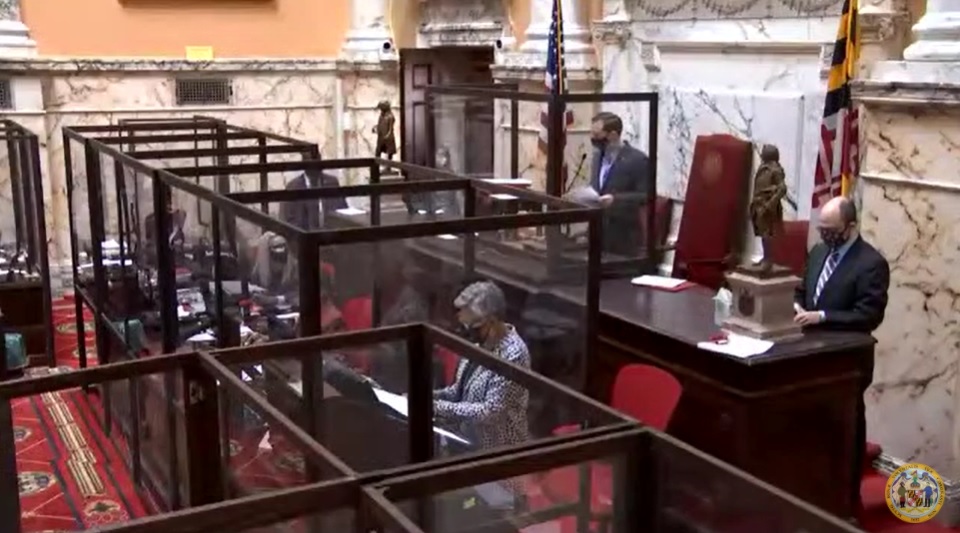 The Maryland Senate from You Tube February 9.

SENATE OVERRIDES 4 HOGAN VETOES: The Maryland Senate overrode four vetoes from Gov. Larry Hogan on Tuesday, including one that would require a licensed firearms dealer to facilitate most transactions involving rifles and shotguns. The four bills that the Senate overrode were part of a slew of legislation from the previous session that Hogan vetoed in May 2020, at least in part to limit new state expenditures at the start of the pandemic, Jack Hogan of Capital News Service reports in Maryland Reporter.

BILL WOULD ALLOW CIVIL SUITS ON UNWARRANTED POLICE CALLS: If you call the police on someone without just cause you may find yourself the subject of a civil suit under legislation being considered by the Maryland General Assembly, Bryan Renbaum of Maryland Reporter reports. Under the legislation – SB0363 – plaintiffs could be awarded statutory damages of $10,000 from each defendant found guilty of violating its provisions. The legislation is sponsored by Sen. Cory McCray (D-Baltimore City) and was previously introduced during the 2020 legislative session.

POLICE REFORM PACKAGE BEFORE COMMITTEE: A package of policing overhauls backed by Maryland House Speaker Adrienne A. Jones would repeal the state’s Law Enforcement Officers’ Bill of Rights, ban the use of no-knock search warrants, create an independent agency to investigate police shootings, and outline a statewide use-of-force policy, Bryn Stole of the Sun reports.

COUNTY LEADERS EXPRESS FRUSTRATION WITH STATE VAXX ROLL-OUT: Nearly three dozen county leaders from across Maryland have sent a letter to Gov. Larry Hogan, expressing their frustration and concern about the COVID-19 vaccine rollout and offering five solutions to help improve the process, Greg Swatek of the Frederick News-Post reports. The letter, dated Feb. 8, was signed by 33 county leaders from 22 of Maryland’s 24 jurisdictions. The only counties not represented were Allegany and Calvert.

MO CO SCHOOLS PLAN TO REOPEN IN MARCH: Pressured by parents with opposing views on when Maryland’s largest school system should reopen classrooms amid the pandemic, Montgomery County officials stayed the course with a plan to return starting next month, Donna St. George of the Post reports. The plan, unanimously approved by the school board Tuesday, takes effect in March as the suburban school system of more than 160,000 students marks a full year of virtual learning.

RASKIN’s EMOTIONAL IMPEACHMENT SPEECH DRAWS ATTENTION: Meagan Flynn of the Post reports on U.S. Rep. Jamie Raskin’s speech on Tuesday as the lead House impeachment manager emotionally relating the frightening events of Jan. 6 when supporters of President Donald Trump stormed the Capitol building as legislators, staff and family members – including his own — hid inside.

PLASTIC BAG BILL: A Maryland House committee on Friday voted to approve a bill prohibiting all retail establishments from distributing a plastic carryout bag at the point of sale, CNS’s Madison Hunt reports in Maryland Reporter. HB314, the Plastic Bag Reduction Act, cross-filled with SB223 in the state Senate, would tackle the plastic pollution problem in the state, advocates said.

THERAPY DOGS COULD BE MANDATED IN SCHOOLS: CNS’s Tom Hindle reports that a bill in the state legislature would require public schools to allow the use of therapy dogs across the state. There’s currently no Maryland-wide policy for these dogs. Under the bill — filed in the House as HB713, and in the Senate as SB419 — certified canines would be permitted entry to offer emotional and scholastic support for students. How exactly that should happen would be left up to each county board of education. The article appears in Maryland Reporter.

REILLY SEEKS TO WITHDRAW MENSTRUAL TRACKING RESOLUTION: Sen. Ed Reilly has moved to withdraw a resolution calling on the Maryland State Board of Education to teach menstrual tracking during health education after activists launched a Facebook group entitled “I Bled for Ed,” and decried the proposal as invasive and inappropriate, Olivia Sanchez of the Capital Gazette reports.

ALCOHOL-TO-GO COULD CONTINUE POST-PANDEMIC: Throughout a COVID-19 pandemic that has forced closures of dozens of area restaurants, carryout has proved a dependable, if not large, source of revenue. And so have sales of alcohol to-go that restaurants with liquor licenses have been permitted to offer during Maryland’s state of emergency. Restaurateurs say their ability to offer to-go alcoholic drinks with meals should continue in a post-COVID-19 world. A proposal by some state lawmakers would allow that to happen, Lorraine Mirabella and Bryn Stole of the Sun report. 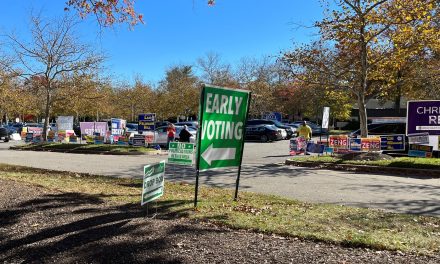