HOGAN CAREFUL ON SYRIAN CRISIS: Gov. Larry Hogan declined Monday to follow the lead of more than 20 other Republican governors who have said they would not accept Syrian refugees in their state, saying Maryland would make a “reasoned and careful” decision on what to do, Michael Dresser reports in the Sun. 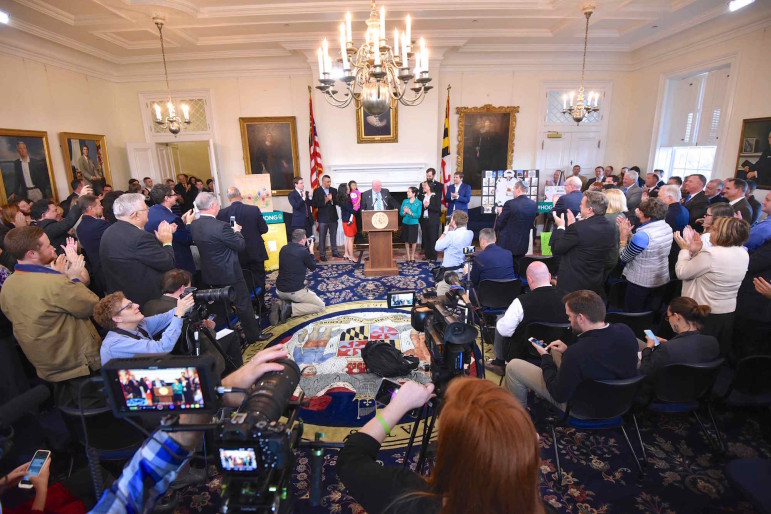 The Governor’s Reception Room was packed with staff and cabinet secretaries clapping, shouting and whistling as Gov. Hogan announced he was cancer free. Print scribes are seated, likely tweeting the news on their smart phones.

MIKULSKI TO GET MEDAL OF FREEDOM: Sen. Barbara A. Mikulski, the dean of Maryland’s congressional delegation, will receive the Presidential Medal of Freedom next week, the White House said Monday.The medal, the nation’s highest civilian honor, will be awarded to Mikulski for her work on health research, women’s issues, science funding and making higher education more affordable, John Fritze is reporting in the Sun.

STATE WORKERS RALLY FOR PAY RAISE: A labor union for Maryland public employees held rallies across the state Thursday to place pressure on Gov. Larry Hogan’s administration for a pay raise and more money to fill vacant jobs under their current contract negotiations, Naomi Eide of CNS is reporting in MarylandReporter.com. The Maryland council of the American Federation of State, County and Municipal Employees is asking for “fair pay, fair treatment” at work, and resources to help provide public services, according to Jeff Pittman, a union spokesman.

STRICT OPIOID DISPENSING GUIDELINES URGED: Stricter guidelines for prescribing and dispensing powerful pain medications are needed to curb the nation’s deadly opioid epidemic, according to a report released Monday from public-health leaders at Johns Hopkins University. Josh Hicks of the Post reports that the analysis offered broad recommendations for addressing opioid abuse, but it stood out for its focus on the supply chain, including physicians and pharmacists.

PG BEGINS SETTING LEGISLATIVE AGENDA: Authorizing a bag tax, establishing an inspector general for county schools and changing liquor laws are among the legislative priorities for Prince George’s County lawmakers who return to Annapolis in January for the next legislative session. Arelis Hernandez of the Post is reporting.

THE HOGAN EFFECT…: Josh Kurtz of Center Maryland serves up a free-association column kicked off by Del. Kathy Szeliga’s entry into the U.S. Senate race on the hope that the “Hogan effect” is real.

WOMEN CRITICAL TO HOUSE RACE: The words “woman” or “women” appear 11 times in the seven-paragraph biography on the campaign website of congressional hopeful Kathleen Matthews. Women for Jamie, a group formed by fellow candidate state Sen. Jamie Raskin, boasts more than 550 members. The seven Democratic candidates for Maryland’s 8th District seat know that women — especially those over 50 — are critical to their success in April’s primary, Bill Turque of the Post reports.

O’MALLEY, AFTER THE DEBATE: Trailing in polling and fundraising, Martin O’Malley’s presidential campaign is shifting staff from its Baltimore headquarters to early primary states such as Iowa, John Fritze of the Sun writes. The shift comes just days after O’Malley’s performance at the second debate was widely praised. Yet his campaign has struggled to raise the money needed to mount a campaign — reporting less than $1 million on hand at the end of the third quarter.

70 MARYLANDERS BACK CLINTON: Hillary Clinton’s presidential campaign announced endorsements Tuesday of more than 70 officials and community leaders in Maryland — including most of the state’s congressional delegation — underscoring the sway the former secretary of state holds even in the home territory of a rival, John Fritze reports for the Sun.

NO. 13 JUMPS INTO DEM PRIMARY FOR MAYOR: Patrick Gutierrez, a former banker and sportswriter, became the 13th Democrat to join to race for Baltimore’s mayor Monday, writes Luke Broadwater for the Sun. Gutierrez, a community activist who lives in Northeast Baltimore with his wife and two daughters, formally filed to run Monday afternoon at the Board of Elections.

CECIL RETURNS TO PAPER BALLOTS: Cecil County voters will have a blast from the past in 2016. That’s when voters will return to paper ballots in a statewide move to create a verifiable paper trail for better reliability of election results, writes Cheryl Mattix for the Cecil Whig. The new system will replace touchscreen voting machines that have been used in Maryland for the last 10 years.

LEGGETT BACK AT WORK AFTER SURGERY: Montgomery County Executive Ike Leggett is expected to return to the office today after working from home for the previous 10 days while recovering from back surgery, according to his spokesman Patrick Lacefield. Andrew Metcalf of Bethesda Beat writes that Lacefield said he didn’t know the exact nature of the surgery, but said Leggett has been suffering from back pain for a while and finally decided to undergo surgery.