NEARLY 900 POT APPLICATIONS: State regulators in Maryland say they have received so many applications to grow, produce and sell medical marijuana that they no longer expect to begin issuing preliminary licenses by mid-January, writes Fenit Nirappil in the Post.

NO MONEY FOR RECIDIVISM PREVENTION PROGRAMS: A panel tasked with finding ways to reduce criminal recidivism in Maryland may have to look for other sources of money to pay for any proposed programs, reports Bryan Sears for the Daily Record. Consultants working with the state Justice Reinvestment Coordinating Council told members of a subcommittee on sentencing Thursday that the early cost projections for increasing substance abuse and mental health programs will likely not be initially covered by some recommended changes to the state’s criminal justice system. 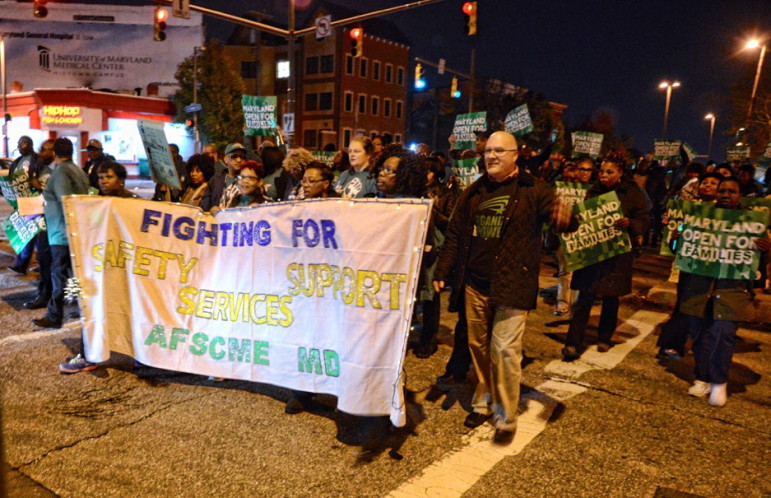 AFSCME RALLIES: Maryland state and university employees rallied across the state Thursday night to push the Hogan administration for a fair contract as negotiations continue. “Governor Larry Hogan put new signs on all the highways leading into our state that say, ‘Maryland – Open for Business’,” said Patrick Moran, President, AFSCME Maryland Council 3 (front right of photo). “State workers are here to say: Maryland should be open for families too! State and university employees are fighting for fairness on the job and for the resources we need to provide great services for Maryland families.”

BLAME FOR CAREER CENTER CLOSING: The Maryland Democratic Party slammed Republican Gov. Larry Hogan late Thursday for closing one of three Career Centers in Baltimore as of Friday. But they appear to have been pointing their fingers at the wrong people, since President Obama and Congress may be to blame, writes Len Lazarick for MarylandReporter.com.

PARCC & EMPLOYMENT: Donald Fry, writing for Center Maryland, says, “When we consider the needs of employers in today’s competitive and complex economy … I’d suggest that reasoning and analytical skills are entirely appropriate areas to be measuring to assess a student’s progress and skill sets. After all, in addition to placing our children in an environment to build important socialization skills, the K-12 school years are essentially about providing our youth with the fundamental learning and skills to enable them to either pursue a higher education degree or to find gainful employment after graduation.”

UNIONS BACK PENA-MELNYK: Two unions have announced their support for Del. Joseline Peña-Melnyk’s race for Congress in District 4, Christina Jedra reports for the Annapolis Capital. The Laurel-based International Association of Heat and Frost Insulators and Allied Workers Local 24, and the Steamfitters UA Local 602, headquartered in Capitol Heights, made their endorsements last week.

MIKULSKI EARNS PRAISE: U.S. Sen. Barbara A. Mikulski (D-Md.), who will be retiring in a year after serving five terms in the Senate, thanked members of the Cecil County Chamber of Commerce Thursday for supporting her over the years and promised to continue fighting for her constituents until her last day in office, Cheryl Mattix writes in the Cecil Whig. “I’m not writing my final chapter yet,” she said.

HARRIS TOUTS SZELIGA FOR SENATE: A Republican has not represented Maryland in the U.S. Senate since 1987. But Maryland Congressman Andy Harris believes that could change soon. He thinks the woman who could change that is Maryland Del. Kathy Szeliga, Baltimore County, reports Mitchell Northam for the Salisbury Daily Times.

EDWARDS DRAWS DISTINCTION: For months the two candidates running for Senate in Maryland have sought to distance themselves from a banking industry that remains deeply unpopular in the years since the foreclosure crisis. Rep. Donna Edwards has repeatedly labeled her opponent, Rep. Chris Van Hollen, a “Wall Street Democrat.” Van Hollen has responded by pointing to a flurry of bills he has proposed to tighten tax loopholes and apply tougher regulations on the financial sector, writes John Fritze for the Sun. 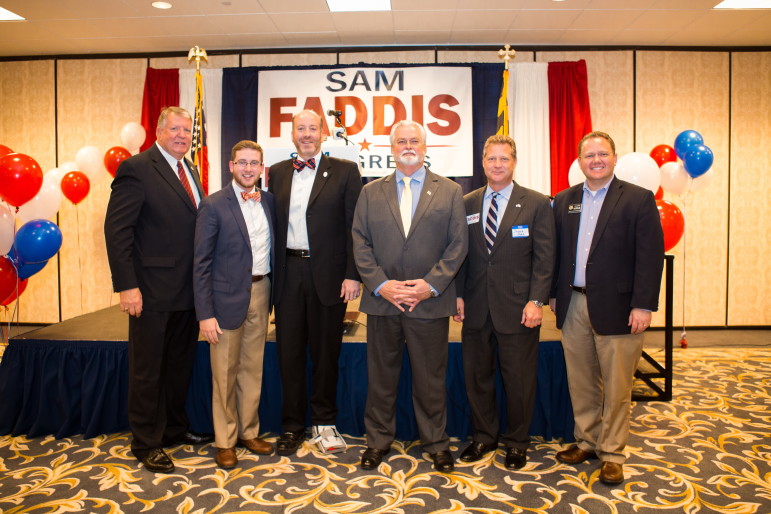 O’MALLEY’S CLIMB: Former Gov. Martin O’Malley has a huge hill to climb in his presidential bid — so much so that his own New Hampshire campaign co-chairman’s wife is supporting his opponent, Hillary Rodham Clinton, writes Kelly Riddell in the Washington Times. Challenges like that are making Saturday’s second Democratic primary debate, in Des Moines, a make-or-break moment for O’Malley.

TWO JOIN CECIL CO. EXEC RACE: Gregory MacDonald, who is running as a Republican and calls himself a “liberty candidate,” filed his candidacy for Cecil County  executive Thursday afternoon, becoming the second candidate to formally announce this week, Cheryl Mattix reports in the Cecil Whig. Republican Councilman Alan McCarthy, who serves as vice president of the county council, announced his candidacy Monday for the position currently held by Republican Tari Moore. She announced last month that she would not seek a second term despite being the county’s first elected executive under charter government.