Dems slam Hogan on jobs center, but Obama may be to blame

President Obama sign with Marylanders Steny Hoyer, the House minority whip, and Tom Perez, the labor secretary at the far left. From the WIOA website

President Obama signs WIOA with Marylanders Steny Hoyer, the House minority whip, and Tom Perez, the labor secretary at the far left. From the WIOA website 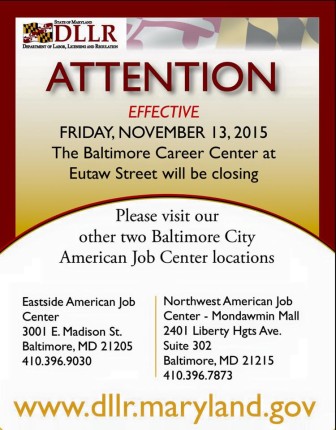 From the Facebook page of Maryland Department of Labor Licensing and Regulation.

The Maryland Democratic Party slammed Republican Gov. Larry Hogan late Thursday for closing one of three Career Centers in Baltimore as of Friday. But they appear to have been pointing their fingers at the wrong people, since President Obama and Congress may be to blame.

An email from the Democrats noted that on Tuesday, “the Maryland Department of Labor Licensing and Regulation posted an “FYI” on its Facebook page that the Baltimore Career Center on Eutaw Street will be closing on November 13, 2015.” Maryland Democratic Party Executive Director Pat Murray came out swinging.

“When Larry Hogan promised a better future for Baltimore, he didn’t say one of his innovative ideas was to eliminate services that connect Baltimore City residents to jobs,” Murray said in the email. “Larry Hogan isn’t holding a press conference to announce this closure because he hoped no one would catch him taking an important part out of Maryland’s economic engine. Public education, transit and now workforce development cuts are all ways Larry Hogan is shortchanging Baltimore.”

Asked about the email, Summar Goodman, deputy director of communications at DLLR, the state labor department, responded: “The new WIOA law which went into effect on July 1st requires state staff to be co-located with local partners within the American Job Centers to better assist the customers and to provide a full range of services. The Eutaw Street staff will be relocated to both the Mondawmin and Eastside American Job Centers to be compliant with the law.”

A quick Google search found that WIOA is the Workforce Innovation and Opportunity Act,” passed with bipartisan majorities in Congress. On the WIOA website, there’s a video from Maryland’s own Tom Perez, the U.S. labor secretary and former head of DLLR praising the new law, along with Education Secretary Arne Duncan.