ADVOCATING FOR IMMIGRANT STUDENTS: Maryland educators and legislators say that more services and new approaches to teaching are needed for immigrant students struggling to get an education as they adjust to life in the United States, Liz Bowie of the Sun reports. “I think it is abundantly clear that as hard as folks in the city are trying, we have long way to go to make sure that we are giving immigrant students a great education,” said Sen. Bill Ferguson, a Baltimore Democrat.

VICTIM ADVOCATES PUSH TO SAVE FUND: Advocates for crime victims in Maryland are urging Congress not to cut money from a fund that helps them, reports Alison Knezevich for the Sun. The bipartisan budget agreement signed by President Barack Obama this month to fund the federal government beyond the next presidential election calls for removing $1.5 billion from the Justice Department’s Crime Victims Fund. Dozens of nonprofits, prosecutors’ offices and other agencies in Maryland rely on grants from the fund to support services such as counseling, temporary housing, and legal services for victims.

CHAT WITH RESOURCES SECTY: MACo’s Conduit Street blog does a Q&A with Mark Belton, Secretary of the Department of Natural Resources, who is a former Queen Anne’s County commissioner. He discusses his experience and what he sets his sights on at Natural Resources.

DOSE OF REALITY FOR FANTASY FOOTBALL: Maryland is on track to join the growing number of states that are looking at potentially regulating short-term or one-day fantasy football games, with a growing number of officials calling for an in-depth review of the industry and whether it operates legally in the state, Bryan Sears reports for the Daily Record. The concerns in Maryland come as New York has declared FanDuel and DraftKings —  the most widely used sites — illegal gambling operations.

BETTING ON REDISTRICTING REFORM?: Fraser Smith and Karen Hosler, both of the WYPR-FM, talk about Gov. Larry Hogan’s chances of changing the way Maryland draws congressional districts. What are the chances? Not so good.

FORESHADOWING 2018: Last week, writes Laslo Boyd for Center Maryland, “we may have seen the prologue to the 2018 gubernatorial election as well as a foreshadowing of the 2016 General Assembly session. Public statements were exchanged, criticisms were volleyed back and forth, and there was a scramble to reach the moral high ground. The precipitating event was the revelation that Maryland will have an unexpected and more to the point, unprojected, budget surplus going into next year.”

SOUND TRANSIT IDEA: In late October, Gov. Larry Hogan announced BaltimoreLink, the most dramatic reworking of Baltimore’s mass transit in years. The $135 million plan seeks to improve mass transit in Baltimore in the wake of the canceled Red Line project, writes Nick Zaiac of the Maryland Public Policy Institute in an article in MarylandReporter.com. This announcement is surprising to many, as the funding source for the new improvements is unclear, and the first improvements began Oct. 26, just four days after the program was unveiled.

MD GOP RISING? Del. Kathy Szeliga began her stump speech with a sentiment shared by many Maryland Republican candidates. “Isn’t it time for new faces and new voices in Washington, D.C.?” Szeliga asked. The crowd acknowledged: “Yes. Yes it is.” It’s a sentiment shared by those lacking political experience in federal office — or any public office at all — as they embark on 2016 elections, Rema Rahman writes for the Annapolis Capital.

VAN HOLLEN STUMPS IN WA CO: In his bid for the U.S. Senate, Rep. Chris Van Hollen sounded a familiar theme Wednesday night to the United Democrats of Washington County, noting there might not be many ideological differences between Democratic candidates, but what matters is who can get things done, writes Tamela Baker for the Hagerstown Herald Mail. Although he trails fellow U.S. Rep. Donna Edwards, D-Md., in the latest polls, he did not overtly refer to her or any other rival, including speculation U.S. Rep. Elijah Cummings, D-Md., would defeat them both if he jumps into the race.

O’MALLEY HONORS VET: Democratic presidential candidate and former Maryland Gov. Martin O’Malley paid homage to Veterans Day on Wednesday by calling a College Park man and former Marine who is walking across the country to honor the comrades he lost in Iraq, John Fritze of the Sun writes. Jonathan Hancock, a 32-year-old man who left the Marines in 2009 after seven deployments, began the walk to California on Sept. 11. O’Malley caught up with him in Pembroke, Ga., about 35 miles west of Savannah, and the two spoke for a few minutes. 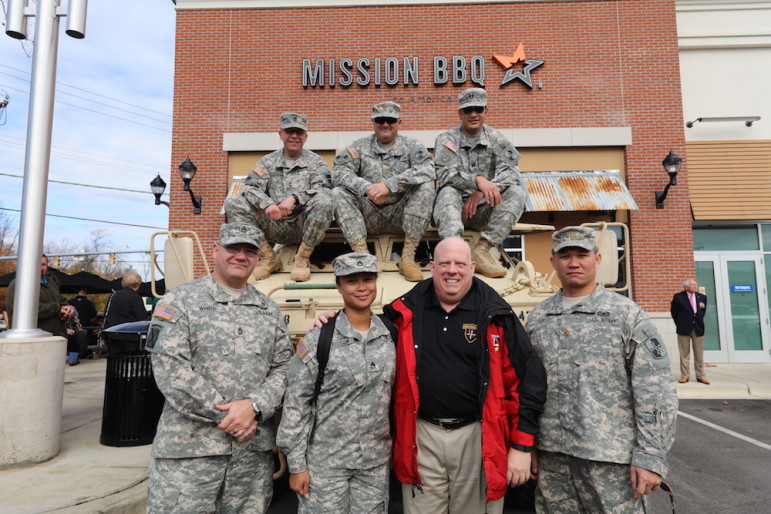 Gov. Larry Hogan at with veterans and current military at Mission BBQ in Annapolis on Veterans Day.

ON THE GOP DEBATE: Tom Hall of WYPR-FM discusses the latest GOP presidential debate with Sheri Parks, associate professor in the Department of American Studies at the University of Maryland; E.R. Shipp, a Pulitzer Prize winning journalist and associate professor at the School of Journalism at Morgan State University; and Richard Cross, a former press secretary and speech writer for Bob Ehrlich when he was in Congress and when he served as governor