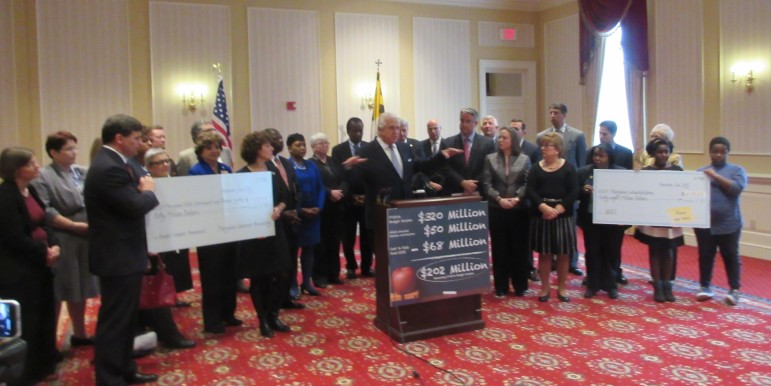 Democratic legislators are yet again asking Gov. Larry Hogan to release the final $68 million of school aid they appropriated now that the state has a larger surplus and higher revenue projections than expected when they passed the budget in April.

Yet again, the Republican governor has rejected their plea, as he has throughout the year, citing structural deficits looming in the future and pension liabilities. The Democrats insist those deficits have been cured. 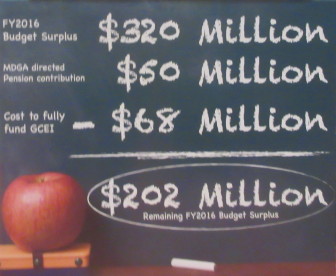 “We have done what we promised to do,” said House Appropriations Committee Chair Maggie McIntosh, D-Baltimore City, at an Annapolis news conference. “We have closed the structural deficit.”

But Hogan spokesman Doug Mayer responded, “As both Senate President Miller and Speaker Busch know, Maryland is still facing a nearly $1 billion cumulative deficit over the next five years. On top of that, there is a $20 billion hole in the teacher and state employee pension system that the General Assembly has repeatedly failed to address.”

The legislators had already pointed out that the budget surplus allows an amendment to kick in that will put an additional $50 million into the state pension system for public school teachers and retirees.

As the lawmakers repeated arguments they had been making since spring — with the added impetus of found money — and Hogan’s staff repeated the governor’s position, it was not clear whether the legislators hoped to change Hogan’s mind or simply remind voters that Hogan had “cut” education funding.

“It’s a short-sighted decision,” Sen. Rich Madaleno, vice chair of the Budget and Taxation Committee, told reporters. Reprising his role as the Democratic attack dog on school aid, the Montgomery County Democrat, said, “Governor Hogan, Halloween is over. Stop trying to trick the people of Maryland that we don’t have the funds.”

Even after funding the school aid and the extra pension contribution, there would still be a $200 million surplus, Madaleno said, 10 times more than originally projected.

Mayer repeated Hogan’s consistent assertion that, “this administration funded education at record levels this past year and it will remain a top priority going forward.” Hogan had actually increased education funding to $6.1 billion, but had funded only half of the Geographic Cost of Education Index, a supplement that goes to 16 of 24 counties.

The two sides appear ready to replay their assigned roles until Hogan submits his next budget in January. In a brief conversation, House Speaker Michael Busch said there had been no private discussions with Hogan on the issue.

The money “cannot be used for anything else,” Busch noted.

Some pragmatic Hogan supporters wonder why he gave Democrats that rock to throw at him when $68 million is such a piddly amount in a $40 billion budget.

Hogan felt he had compromised enough on other budget issues, and needed to show his resolve, even when revenue numbers improved.

In May, Hogan was pragmatic enough to concede long-term defeat on the issue. The $68 million in the Geographic Cost of Education Index was the only discretionary amount in school funding — one that O’Malley failed to fully fund in his first years, as well.

The Democratic legislature passed legislation to make that GCEI funding mandatory in future years. In May, Hogan allowed that measure to become law without his signature, saying a veto would put him and Republican legislators through a fight they were likely to lose.

That issue is off the table for the rest of his term, but it will not necessarily go away. A commission is currently studying the education formulas passed in 2002, and its report is due next year. The commission is likely to seek changes in formulas, and it is expected ask for more money, as most education funding study commissions do, at least in some areas.

May 6: Loss of expected funding has school systems on edge as they urge Hogan to release money