BUDGET SURPLUS MEANS PUSH FOR SCHOOLS: The  top Democratic lawmakers renewed calls Monday for Gov. Larry Hogan to release $68 million in extra funding for the state’s most expensive school districts, citing more than a half-billion dollars in budget surpluses over the next two years and what they described as pressing educational needs, Josh Hicks reports for the Post.

HEALTH CONNECTION REVAMPS WEBSITE: The Maryland Health Connection website is up and running for open enrollment. The Maryland Health Connection website has certainly had its share of problems. Its rollout two years ago caused major issues and frustrations for people trying to enroll in health care plans, but executive director Carolyn Quattrocki said they revamped the website, WBAL-TV is reporting. 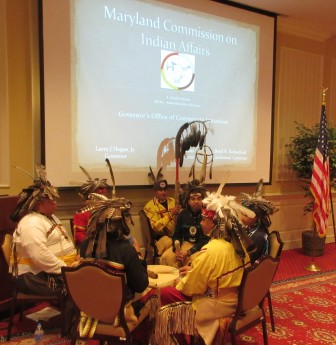 There was a kick-off event for Maryland’s American Indian Heritage Month in Annapolis Monday, hosted by the Maryland Commission on Indian Affairs.

DOOMED REDISTRICTING REFORM: The editorial board for the Sun opines that Gov. Larry Hogan’s redistricting commission may have been doomed from the start — its intent to reduce or eliminate gerrymandering of congressional and legislative districts running at odds with the intent of the Democratic majority within the General Assembly to keep that particular weapon in their political arsenal. But at least opponents should have the decency to offer intellectually honest critiques.

MANNO REVEALS CANCER DIAGNOSIS: State Sen. Roger Manno said Monday he is recovering at home after undergoing aggressive treatment for prostate cancer, writes Bryan Sears for the Daily Record. Manno, D-Montgomery County and co-chair of the Spending Affordability Committee, made the announcement in an email to constituents in which he said the disease was discovered after a routine biopsy in September.

MADALENO RISING: Josh Kurtz of Center Maryland profiles state Sen. Rich Madaleno, a rising star in state politics who has become the “pointer-outer in chief” of problems he sees in the Hogan administration agenda. Some say Madaleno talks too much and makes missteps. But everyone agrees he does so with passion.

NOW, FOR A MUSICAL INTERLUDE: As the state tumbles toward another legislative session in Annapolis, let’s take a break from idea that only the blue-suited politicians inhabit the streets of one of the most beautiful state capitals in the country. Courtesy of a very large and talented group of Naval Academy midshipmen, here’s a video called “Naptown Funk,” posted on WBAL-AM (and viewable below and elsewhere.) We challenge the state’s politicos to beat this.

SEASONAL WORKER PROGRAM: Sen. Barbara Mikulski, D-Maryland, has introduced a bipartisan bill to help seasonal workers navigate the H-2B non-agricultural visa program. The Save our Small and Seasonal Businesses Act of 2015 will help small businesses meet their need for seasonal employees and better respond to fluctuations in demand, according to a statement from Mikulski’s office. Anamika Roy of the Daily Record reports that Mikulski has been an advocate of the bill as a way to help Maryland’s seafood industry, which uses the H-2B visa program to attract seasonal labor to help pick crab meat on the Eastern Shore.

VAN HOLLEN ON RUN: Democratic U.S. Rep. Chris Van Hollen can be heard on Midday with Sheilah Kast on WYPR-FM discussing (around minute 18:00) his run for Barbara Mikulski’s Senate seat.

O’MALLEY ON GUN-MAKER IMMUNITY: Gov. Martin O’Malley said that if elected president, his administration would stop defending a controversial, decade-old law that grants legal immunity to gun manufacturers whose weapons are used in crimes, one of several executive actions his campaign is expected to discuss on Tuesday.  John Fritze of the Sun writes the story.

DELAYS IN AA POT BILL: Anne Arundel County Executive Steve Schuh’s administration supported more amendments on its bill that aims to implement Maryland’s medical marijuana laws in the county, reports Rema Rahman for the Annapolis Capital. A second, dueling measure that attempted to do the same but less restrictively was also withdrawn. Amendments on the administration bill mean another delay voting on the measure until Dec.7, the next time all seven council members will be present at a public hearing.

WARNOCK TO ENTER MAYOR’S RACE: Luke Broadwater of the Sun reports that David L. Warnock, the Baltimore venture capitalist and philanthropist, is entering the mayor’s race — arguing that his business background and political inexperience are positives for a city in desperate need of job growth and a fresh start.