SIGH OF RELIEF OVER BUDGET DEAL: It wasn’t until the wee hours of Friday morning that Congress finally passed a two-year deal that staves off harsh spending reductions and averts a credit default, setting aside most of the big fights over the federal budget for the remainder of President Barack Obama’s term. At $80 billion, the latest accord is modest by Washington budget standards. But in Maryland, where federal spending powers a large portion of the economy, many businesses said they were just grateful a deal — any deal — had been reached, Lisa Mascaro, Christie Parsons and Natalie Sherman report in the Sun.

TAKING ON REDISTRICTING: Robert Barnes of the Post profiles Steve Shapiro, a 55-year-old law student who has taken on the state of Maryland’s redistricting process. He and a seasoned lawyer will argue a narrow procedural issue Wednesday before the Supreme Court in the hope of keeping Shapiro’s lawsuit alive. If they succeed, they would still face an uphill battle on his bigger point: that partisan gerrymandering is a threat to an individual’s constitutional rights.

VIEWS ON RACE, POLICE: A deep racial divide exists among Marylanders over who is to blame for violent police encounters and whether the state’s criminal justice system treats African Americans and whites equally, according to a Washington Post-University of Maryland poll. But, Paul Schwartzman and Scott Clement of the Post write, that with a month before the Freddie Gray trial is to begin, the poll finds that a broad majority of Marylanders endorse the Baltimore City prosecutor’s decision to file charges against six police officers who had custody of Gray in April when he suffered a fatal injury.

TAXPAYER MIGRATION: In 2013 slightly more people left Maryland than moved to the state, according to a Capital News Service analysis of IRS tax filing data that tracks migration. Maryland saw a net reduction in population of less than 1% — .26% — between 2012 and 2013, writes Zoe Sagalow of CNS for MarylandReporter.com. People left Alaska at a higher rate than any other state – a 1.22% net loss — followed by New York, with a .72% loss.

HISTORY AND ART: Annapolis’ Historic Preservation Commission and local artists are going to Circuit Court over the definition of the word alteration. Commission officials said murals are “alterations,” giving it authority over them. But the owner of one  building contends the city shouldn’t regulate the mural because history and art coexist in other areas. Chase Cook of the Annapolis Capital writes that the case could change how the commission regulates the city’s historic properties and might have an effect statewide.

HISTORIC CHAMBER OPENS: The Old Senate Chamber in the Maryland State House used to be blue. But the four people inside the room had worked for years on its recently completed dramatic overhaul, which reached from beneath the floor to the recesses above the ceiling. Now, unlike other rooms in the State House, there are no electric lights in the chamber. The old, waxy mannequin of George Washington is gone too. It used to mark the spot where the commander of the Continental Army stood when he resigned his commission on Dec. 23, 1783. Wendi Winters writes the story for the Annapolis Capital, which is topped by a video interview with the four people.

DELEGATES SWORN IN: The Maryland General Assembly gained two new delegates Friday when Elizabeth “Susie” Proctor and Carlo Sanchez, both Democrats from Prince George’s County, were sworn in to fill seats that were vacated after a death and a resignation, Ovetta Wiggins of the Post reports.

HOGAN’S FB MINION ERRS: Political pundit Barry Rascovar writes about the strange Facebook posts on Gov. Hogan’s page, blaming them on a minion who has gotten information wrong when he wrote: “Today, a small band of out-of-touch legislators have convened a ‘hearing’ in Annapolis to complain about our closing of the [Baltimore City] jail. It seems a few professional politicians in Annapolis want to try somehow to defend the indefensible failed status-quo.”

HOGAN CORN A-MAZED: After battling cancer for months, Gov. Larry Hogan came out to Thurmont on Sunday in high spirits. Rebecca Savransky of the Frederick News Post writes that Hogan, who recently finished his final round of treatment for non-Hodgkin lymphoma, said he wouldn’t let anything stop him from traveling through the corn maze at Lawyer’s Farm in Thurmont — a corn maze in the shape of his face and the phrase #HoganStrong. Photo from Lawyer’s Farm Facebook page. 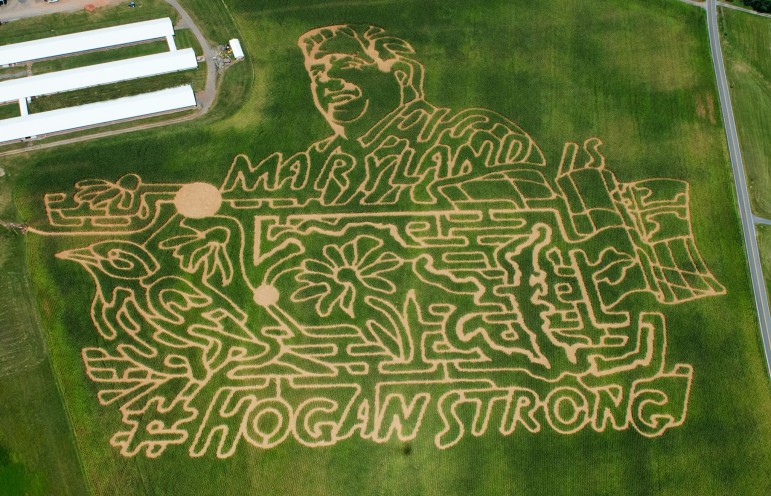 MOVEMENT AGAINST MASS INCERATION: In his new Roughly Speaking blog, Dan Rodricks talks to attorney Dan Clements about why there is now a coalition from right and left to reduce the number of people sent to prison for non violent offenses.

TWO IN TOP 50: Berlin was already “America’s Coolest Small Town.” The Eastern Shore town, along with Havre de Grace, now can add another accolade to its growing list. Quinn Kelley of the Sun writes that both Maryland towns were listed among Travel World’s “Top 50 Small Towns in America.” The list boasts “some of the most unique, quaint, and inviting places in America.”

SPARROWS POINT RAIN TAX: Pamela Wood of the Sun reports that when members of the Baltimore County Council announced plans to phase out the county’s stormwater fees, they said the fees were a burden on businesses, specifically pointing to Sparrows Point Terminal, which bought a shuttered steel mill in the southeastern section of the county last year with hopes of redeveloping it into an industrial complex. Sparrows Point Terminal has the biggest stormwater fee bill in the county, by a wide margin. It pays more than $471,000 — nearly eight times as much as the next-biggest bill, which goes to the Baltimore Business Park in Dundalk.

CREDIT WHERE CREDIT IS DUE: It’s a rather mundane bit of legislation: Baltimore County Bill 77-15, “Code Revision — First Enactment.” The update to the county code to be considered by the County Council today includes a bid to return Adelaide Haspert’s name to the formal document, recognizing her as the designer of the county seal, Pamela Wood reports in the Sun.

CONFLICT OF INTEREST: Carroll County Commissioner Doug Howard is in an interesting situation. For the next three years, he’ll be walking a fine line because of a job he accepted in September with Carroll Community College. The editorial board for the Carroll County Times opines that sometimes conflicts of interest are real ones and sometimes they are perceived ones. From a public perspective, it’s often a difficult distinction to discern.

RUNNING FOR MAYOR OF BALTIMORE: WYPR-FM takes stock of the candidates for Baltimore City mayor who announced so far, as well as a few who are expected to run.  Tom Hall is joined by Fern Shen of the Baltimore Brew and Taylor Stewart of Leadership for Educational Equity.