Like every politician these days, Gov. Larry Hogan has a Facebook page. His political organization, Change Maryland, is on Facebook, too. The comments on the two blogs often are identical.

Hogan’s Facebook blogs tend to be powder-puff, good-news summaries of visits and actions by the governor. That’s par for the course.

It’s pretty much what his predecessor, Martin O’Malley, put out on his Facebook page – at least until O’Malley started planning his run for president. Then, his Facebook musings turned heavily partisan and highly politicized.

That doesn’t work as well, though.

Social networking websites are ideal for promoting ideas and policies, of telling the world about your successes and new programs and ideas. It’s perfect for promoting all the good deeds and heart-warming things you do every day.

Facebook isn’t the best vehicle for expressing anger and hurling cheap shots at your enemies. 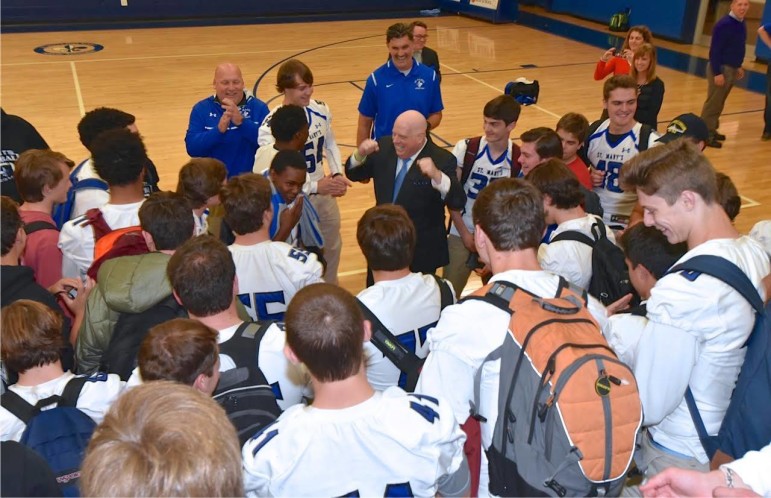 In another Facebook posting, Hogan showed a visit to The Saints football team at St. Mary’a High School in Annapolis. “The team had sent me a card signed by all the players saying that they prayed for me at every practice,” Hogan said. “I went by to thank them and let them know how much it meant to me. I told them it was great to be blessed by the Pope, but also awesome to have a whole team of Saints praying for me!”

Hogan has endeared himself to his supporters and even to his political opponents by his courageous fight against cancer and his willingness to use his illness to promote cancer awareness and sympathy for others with this dangerous disease. He has used his Facebook page to tell those stories.

Most of his other Facebook comments are revised versions of press releases about Hogan initiatives and Hogan speaking appearances around the state.

But occasionally, Hogan’s Facebook staff writer gets carried away and turns the governor’s comments venomous and stridently partisan.

“Today, a small band of out-of-touch legislators have convened a ‘hearing’ in Annapolis to complain about our closing of the [Baltimore City] jail,” Hogan wrote. “[I]t seems a few professional politicians in Annapolis want to try somehow to defend the indefensible failed status-quo.”

Hogan should disavow his staff writer’s statements. He knows they aren’t true. His Facebook “friends” deserve an apology.

Fact: There was a hearing in Annapolis on Hogan’s decision to close the City Jail. Such a hearing is routine. It’s what legislators all over the country do.

Fact: There was no “small band of out-of-touch legislators.” Indeed, no one at the hearing made “out-of-touch” statements. It was a straight-forward, status-update session.

Fact: No one at the hearing complained about the jail closure. Legislators wanted to know where the transition stood. Some lawmakers praised the governor’s action.

Fact: Not a soul at the hearing tried “to defend the indefensible failed status-quo.”

Hogan’s Facebook remarks were made up out of whole cloth. The post was written even before the hearing commenced. It was trumped-up partisanship designed to make Hogan’s foes look like fools.

Instead, Hogan’s staff writer made the governor look like the fool.

Then the governor’s minions compounded the error with another strange and intentionally misleading post.

It stated the legislature had held a “partisan” hearing to “question” Hogan’s jail closure. Wrong on both counts.

It was an impartial fact-finding session where Hogan’s prisons chief received plaudits for a job well done.

Then the post mocked the Baltimore Sun for daring to write in an editorial stating that Hogan had tried to politicize the hearing with his Facebook comments.

The Sun’s assessment was on the mark, though.

The fact that Hogan’s Facebook staff writer didn’t like his boss had been caught trying to turn a routine, non-partisan legislative hearing into a political ambush (which it was not) makes Hogan sound petty, parochial and a bit paranoid.

What Hogan’s minions did in his name on his Facebook page should embarrass the governor.

It gives ammunition to his enemies and needlessly antagonizes legislators he will need on his side when the General Assembly convenes in January.

In his own words

Here’s what the governor wrote on his Change Maryland page and reproduced on his Facebook page on Oct. 26:

“Too often we see wedge politics and petty rhetoric used to belittle our adversaries and inflame partisan divisions.

“It is only when the partisan shouting stops that we can hear each other’s voices and concerns.

“I am prepared to create an environment of trust and cooperation. . .”

As governor, it is Hogan’s obligation to follow his own written words and stop the partisan shouting.

If Hogan is serious in what he wrote for Change Maryland, if he wants to bridge the political divide in Maryland and solve problems based on mutual respect, he’s got to clamp down on his Facebook staff writers, who seem eager to light fires, divide and exploit the politics of nastiness.

Hogan has a choice: Stick to the facts and try to overcome Maryland’s political divisions through good will and honest dialogue, or snarl sarcastically at the opposition and fabricate events and intentions.

He can’t have it both ways.