DEATH PENALTY REPEAL PETITION: A new battle began Friday over the future of Maryland’s death penalty, just a day after Gov. Martin O’Malley signed a bill abolishing capital punishment, the Post’s John Wagner is reporting. MDPetitions.com announced that it would lead an effort to gather enough signatures to force a public vote next year on the new law.

GUN LAW PETITION: Meanwhile, a Montgomery County woman who has split with other Second Amendment activists on how to fight Gov. O’Malley’s recently passed gun safety bill said Friday that she has received the green light to begin a petition drive to bring the issue to a referendum, writes Michael Dresser in the Sun.

THE PRISON GANG: In a long but compelling article for the Post, Theresa Vargas, Ann Marimow and Annys Shin report the details of the federal indictments against prison guards and the inmates at the Baltimore City Detention Center and how the inmates, members of a gang, were trained to get specific guards to help them.

PRISON CELLPHONE LEGISLATION: Maryland lawmakers have repeatedly killed legislation sought by corrections officials to crack down on the smuggling of cellphones into prisons, a key element of the gang culture that thrived in the Baltimore jail at the center of a broad federal indictment, the Post’s John Wagner reports.

JOINT BRIEFING: Maryland legislative leaders on Friday announced a joint House and Senate briefing next month prompted by the recent indictments of 25 inmates and corrections guards at a Baltimore city jail. With the larger meeting planned, the House Judiciary Committee has postponed a hearing on the corruption probe that was scheduled for Wednesday, reports John Wagner of the Post.

HOSPITALS SEEK WAIVER PLAN CHANGE: Maryland hospitals say they will not support the state’s new Medicare waiver plan unless the state changes key aspects of the proposal — and they may just get their way, reports Sarah Gantz for the Baltimore Business Journal.

HOTEL POINTS: Alex Jackson of the Capital-Gazette reports that, under its ethics rules, the General Assembly allows legislators who stay at hotels at state expense to take advantage of benefits those hotels offer, as long as the benefits are offered to every guest alike, not specifically to lawmakers. Those benefits can go well beyond a continental breakfast.

PUBLIC-PRIVATE PARTNERS: With the state ready to dedicate its Seagirt Marine Terminal, a product of a public-private partnership with Ports of America, the Sun’s Candy Thomson speaks with Christoper Lee, the owner of Highstar Capital, which own Ports of America. Lee is a big fan of P3s.

TU’S COMEDY OF ERRORS: Opinionmaker Barry Rascovar, writing in the Community Times, weighs in on Towson University’s decision to disband its two men’s sports teams, calling it a “comedy of errors.”

BUSES & I-270 CONGESTION: A pilot program is underway for “bus-on-shoulder” lanes along Interstate 270, writes the Capital News Service’s Nicole Macon in the Daily Record. The Maryland State Highway Administration is studying how to create shoulder lanes that can withstand bus traffic. Buses would use the shoulder lanes when highway traffic slows to a particular speed.

FEDERAL CELLPHONE PROGRAM: Enrollment in a controversial program that provides free cell phone service to low-income families has increased faster in Maryland than any other state in the nation, jumping nearly 90-fold since 2008 — renewing scrutiny on Capitol Hill over its management, John Fritze of the Sun writes.

DOCTORS FOR DELEGATES: Julie Baugham of the Sun follows up on stories from last week about the two doctors from Columbia who have filed for the open House of Delegates seats from Howard County.

CITY STORMWATER FEE: A Baltimore City councilwoman is challenging Baltimore’s plan to charge businesses some of the highest stormwater fees in the state — and divert some of the money that had gone to Chesapeake Bay cleanup to help fund property tax cuts, Luke Broadwater of the Sun reports.

ARUNDEL STORMWATER: In the first of a two-part series for the Capital-Gazette, EB Furgurson writes about the history of the stormwater problems in Anne Arundel County, what problems have been caused by excessive runoff and what the county can do to fix them.

AA & SEQUESTER: Democrats predicted crisis. Republicans yawned. The national media egged them on, writes Tim Prudente for the Capital-Gazette. The sequester arrived March 1, with about $1 trillion in across-the-board spending cuts to federal agencies. Surely, Anne Arundel County residents would feel all that belt-tightening.But where? And who?

MOCO DEM PARTY PICKET: All week, writes David Moon, Maryland Juice has been hearing murmurs about a possible protest by labor unions at the Montgomery County Democratic Party’s May 11th annual fund-raising event. It turns out the picket line has been given the green light, and the MCDCC’s annual spring ball is now becoming a full-blown political controversy. Moon publishes a statement from the AFL-CIO Metro Council.

HIGH RENT, LOW USE: Montgomery County government may soon be paying close to $1 million a year in rent – above the market rate according to one expert — for a domestic abuse center in downtown Rockville that on average sees less than four clients a day, Glynis Kazanjian reports for MarylandReporter.com. The innovative center celebrates its fourth anniversary Thursday

OPPOSITION TO MUSLIM MOVE: A Muslim group’s effort to move its campus from College Park to Maryland’s rural Howard County is being met with opposition from local residents, writes Meredith Somers in the Washington Times. While both sides insist that the debate turns solely on setting zoning precedent, it marks the latest in a series of disputes across the country in which locals have resisted the introduction of Islamic centers to their communities.

WaCo FORUM: Washington County lawmakers are hosting a public forum Thursday evening to discuss the 2013 legislative session of the Maryland General Assembly and answer queries from residents, reports Kaustuv Basu for the Hagerstown Herald-Mail. The post-legislative forum, which is being held at Hagerstown Community College, gives constituents a chance to question county lawmakers.

CARROLL COMPLAINTS: The Carroll County Board of Commissioners will discuss a complaint regarding the county’s prohibition on carrying firearms at county-owned waste acceptance facilities on Tuesday, writes Christian Alexandersen for the Carroll County Times.

Andrea Siegel of the Sun writes about the complaint from two Carroll residents concerning the prayers that the Board of Commissioners say that are “frequently Christian in nature,” but never mention other deities.

POST EARNINGS PLUMMET: The Washington Post Co. reported an 85% drop in earnings, though profits from continuing operations fell by 55% while revenue inched up slightly, Steve Mufson reports in the Post. The company reported strong operating profits for its television broadcasting and cable divisions. But its Kaplan education unit lost money, and its flagship newspaper continued to suffer steady and substantial declines in its circulation and print advertising. 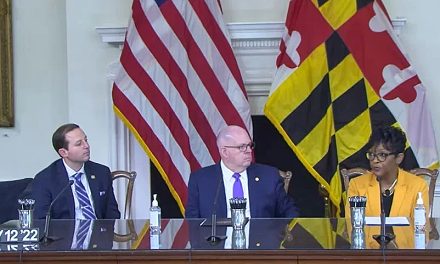