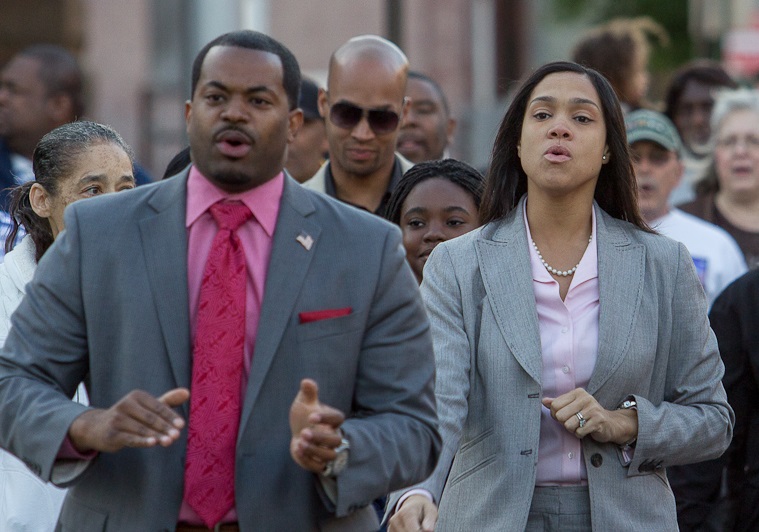 IRS LIEN AGAINST MOSBY PROPERTY: The IRS has placed a $45,000 lien against the property of Nick and Marilyn Mosby — the Democratic nominee for Baltimore City Council president and the city’s top prosecutor, respectively — for three years worth of unpaid federal taxes, Justin Fenton reports for the Sun.

HOGAN TAPS EX-COMMUNICATIONS HEAD AS CHIEF OF STAFF: Gov. Larry Hogan on Tuesday named Amelia Chassé Alcivar,Amelia Chassé Alcivar his former communications director, to serve as his chief of staff, reports Ovetta Wiggins for the Post. Chassé Alcivar will replace Keiffer J. Mitchell, a longtime aide and lobbyist, who stepped in temporarily to fill the position after Roy McGrath abruptly resigned in August.

MARYLAND RANKS HIGH IN POLITICAL ENGAGEMENT: It is no surprise that in a recent study Maryland is ranked near the top among states with the most political engagement, according to two state lawmakers and a former congressman, writes Bryan Renbaum for MarylandReporter. “I would suspect that that’s about where we would be,” Del. Brian Chisholm (R-Anne Arundel) told MarylandReporter.com in a phone interview on Tuesday.

19M BALLOTS FOR 4M VOTERS: Maryland has an electorate of roughly 4 million voters, but state election officials ordered roughly 19 million ballots for in-person voting for the Nov. 3 election, reports Bennett Leckrone for Maryland Matters. The sheer number of in-person ballots, coupled with the fact that more than a million voters have already requested mail-in ballots, left some voters scratching their heads. But since voters will be able to vote at any in-person voting center in their county, election officials say they need a stockpile of ballots at every location.

OFFICIALS URGE MORE FEDERAL STIMULUS: State and local officials say the economic hit brought on the pandemic might not be as bad as originally expected — so long as the federal government doles out stimulus money later this year, reports Bennett Leckrone for Maryland Matters. Although revenue shortfalls might not be as bad as originally anticipated, a strong second wave of COVID-19 or a stalled federal stimulus package could put state and local governments in a “catastrophic” situation, Comptroller Peter Franchot (D) warned during a virtual discussion with Committee for Montgomery on Tuesday night.

SALLING V. RUPPERSBERGER: Democrat Dutch Ruppersberger has represented the 2nd District in the U.S. House of Representatives for 18 years. Running against him this fall is state Sen. Johnny Ray Salling, a Republican who has represented his Baltimore County district in Annapolis since 2014. Lilly Price of the Capital Gazette writes on this race.

HARRIS GETS HIGH ‘TRUMP LOYALTY SCORE:’ If President Trump was only going to have one ally in Maryland, he couldn’t do much better than Rep. Andy Harris (R), a comprehensive analysis of GOP members of Congress found. The Axios analysis looked at how Republican members of Congress responded to various Trump controversies. Harris earned a “Trump Loyalty Score” of 88 and he voted 93% of the time with the president. Not quite a perfect 100, but good enough for a fifth-place tie in the entire Congress, writes Bruce DePuyt of Maryland Matters.

MO CO HAZARD PAY EXCEEDS OTHER COUNTIES: Montgomery County, Maryland’s largest county, has distributed about $50 million in hazard pay to essential workers risking exposure during the coronavirus pandemic, even as other jurisdictions have taken steps to curtail such payments or offered far less, Rebecca Tan reports for the Post.

BA CO TO REIMBURSE EATERIES FOR SAFETY UPGRADES: Marcus Dieterle of Baltimore Fishbowl reports that Baltimore County Executive Johnny Olszewski Jr. announced on Tuesday that the county is launching a $2.5 million fund to reimburse restaurants and other eateries for investments that improve their business’s safety conditions in response to coronavirus and extend the outdoor dining season.

B’MORE SCHOOL FACE $21M SHORTFALL: The Baltimore City school board stared down a $21 million shortfall Tuesday night brought on by pandemic spending, as its CEO decides how to handle the rest of the fall term. All in all, the district spent $131 million on initial pandemic-related expenses, Emily Sullivan of WYPR-FM reports.

BA CO TEACHERS OF DISABLED STUDENTS PROTEST RE-OPENING: John Lee of WYPR-FM reports that teachers who work at Baltimore County’s four schools for severely disabled students say it is unsafe to return to class. “Most of the students at our school cannot wear masks,” Kelly Yalfani, who teaches at Ridge Ruxton School, said at a news conference Tuesday. “And our staff toilet, feed, change clothes. You cannot socially distance from a person without a mask.”

MVA FRONTLINE WORKER DIES OF COVID: A union representing state workers said Tuesday that the death of a frontline Motor Vehicle Administration employee would not have happened if the state had taken proper precautions against COVID-19. The unidentified customer service agent worked at the MVA office in Largo, Bruce DePuyt of Maryland Matters reports.

B’MORE MAYOR CANDIDATES TO DEBATE: Baltimore mayoral candidates are expected to square off virtually ahead of early voting during a forum hosted by the city’s NAACP branch and the Afro newspaper, Talia Richman of the Sun reports.