AS DEADLINE NEARS: A major tax increase on alcohol, a plan to invest public money in start-ups to spur job growth and a measure to give undocumented immigrants tuition breaks at state colleges are among several issues left for lawmakers to decide today, on the last day of Maryland’s legislative session, reports Aaron Davis and John Wagner for the Post.

Out of the 2,353 bills introduced this year, they have already sent about 20% of them (446 bills) to the governor’s desk for signing, blogs Len Lazarick of MarylandReporter.com.

The creation of a state-run venture capital fund, an alcohol tax hike and a financial Band-Aid for Maryland horse racing await lawmakers today, the final day of their legislative session, writes Nick Sohr of the Daily Record. These are among the largest business issues remaining among dozens of other pieces of unfinished business for the General Assembly.

PENSION CUTS: Del. Melony Griffith, House chair of the Joint Committee on Pensions, discusses with Len Lazarick of MarylandReporter.com why the roll-back in pensions for state employees and teachers was necessary.

BOOZE TAX ADVANCES: Bearing down on tonight’s end of the legislative session, Maryland lawmakers met Saturday to chip away at some of the weightiest issues remaining, advancing a 50% increase to the sales tax on alcohol and approving a plan to decriminalize marijuana for the sick, writes Julie Bykowicz and Annie Linskey for the Sun.

The House plan would collapse a three-year phase-in of the state sales tax on alcohol passed by the Senate into one year, Aaron Davis and John Wagner write for the Sun.

The legislation, which now goes to the House of Delegates, initially was going to phase in the tax increase over three years, raising about $29 million in the first year, the AP’s Brian Witte reports in the Annapolis Capital.

If approved by the Senate, Nick Sohr reports for the Daily Record, the legislation would represent a major victory by health and education advocates, who have seen their efforts to raise alcohol taxes rebuffed for decades by the powerful liquor lobby.

Karen Parks of WBFF-TV offers a video report on the bill.

COUNTIES AFFECTED: Residents of Baltimore’s suburbs could see another year of reduced services, as counties continue to feel pressure on two key sources of revenue: state aid and property taxes, reports Larry Carson for the Sun.

Once again, it appears Howard County has escaped any major loss of state revenue, though state funding is still declining in several areas. Not that County Executive Ken Ulman is entirely satisfied, Carson writes in the Sun.

CAPITAL BUDGET PROVISION: The state Senate adopted a last-minute amendment to the capital budget that asks Baltimore’s city government to explain how it will satisfy outstanding payments owed to residents who won judgments against the city in lead paint cases.

TUITION BREAK FOR ILLEGALS: In a close vote, the House of Delegates passed a bill on Friday that would give in-state college tuition to illegal immigrants, following an emotional debate fraught with tears, personal stories, anger and applause, writes Megan Poinski for MarylandReporter.com.

Senate President Mike Miller has said that if the House passed the bill, he expected that the two chambers would be able to work out their differences. O’Malley has said he will sign the bill, reports the Post’s Aaron Davis.

WJZ-TV Gigi Barnett reports that opposition to the proposal remains strong. Scroll down to view her report.

IGNITION INTERLOCK: The Post’s Aaron Davis reports that, ending a multiyear “mud-wrestling match” between Maryland’s House and Senate over drunk-driving laws, thousands of additional drivers arrested annually for drunk-driving will be required to breathe into breathalyzers to start their vehicles’ engines if they want to retain their rights to drive.

WINE SHIPMENTS: Ann Marimow and John Wagner of the Post write that a bill is now on its way to Gov. O’Malley that would allow Maryland residents to have bottles of their favorite wine shipped directly to their door steps.

WINERY SALES: In what will be a boost to local farmers markets, both chambers of the state legislature have passed legislation that will allow wineries to sell their products at the events, writes the editorial board for the Frederick News Post.

RX POT PENALITY: The House of Delegates on Saturday gave final passage to a plan to decriminalize marijuana possession for the sick, Julie Bykowicz blogs for the Sun.

This has been a nine-year quest for Frederick County Sen. David Brinkley, reports Meg Tully of the Frederick News Post.

FRACKING MORATORIUM: Compromises on a bill that would create a temporary moratorium on natural gas drilling in Western Maryland’s Marcellus Shale formation are being hammered out in a series of closed-door meetings, writes David Saleh Rauf, of the Capital News Service, for the Annapolis Capital.

BILL ROUNDUPS: Andrew Schotz of the Hagerstown Herald Mail offers a roundup of bills offered by Washington County legislators and looks into ones that still have a chance in the Maryland legislature as it heads for the finish line tonight, including changing gas price signage.

Christian Alexandersen, of the Carroll County Times, writes that several local bills sponsored by Carroll County’s delegation are awaiting the governor’s signature as the 2011 legislative session comes to a close today in Annapolis.

WHAT THEY DID AND DIDN’T DO: Lawmakers largely avoided new taxes, though they had no problem imposing millions of dollars in new fees, writes Julie Bykowicz and Annie Linskey of the Sun. They tightened up a prohibition on texting while driving, but shied away from letting officers pull over drivers who are chatting away on their handheld cell phones.

BUSCH ON GAY MARRIAGE: Same-sex marriage got an unexpected ally this year in House Speaker Michael Busch. John Wagner of the Post writes about his conversion.

GUN BILLS SHOT DOWN: Despite the tragedy in Tucson and a rash of deadly shootings this year in Prince George’s County, almost every gun-control bill proposed in Maryland has died — again — in a committee controlled by a Washington area defense lawyer whose firm has become highly successful at helping clients avoid lengthy prison terms for alleged gun crimes, report the Post’s Aaron Davis and and Ruben Castaneda.

O’MALLEY ANALYSIS: The Post’s John Wagner and Aaron Davis write that, aside from some victories on the state budget, the governor will have few marquee accomplishments to tout when the heavily Democratic General Assembly adjourns its 90-day session tonight.

MINIMUM WAGE: Proponents of the minimum wage increase see momentum growing, although proposed legislation has gone nowhere in the General Assembly this year. Backers believe they have built support for another try next year, Lorraine Mirabella, reports for the Sun.

BUILD STATE CENTER: The editorial board of the Sun is encouraging the state to move ahead with building State Center.

“I am very disappointed they met without the entire delegation,” said Sen. Jim Brochin, writes Steve Schuster of the Towson Times.

FEDERAL BUDGET: Columnist Dan Rodricks of the Sun writes that, despite their “get the government off our backs attitude,” congressional Republicans including Maryland’s Andy Harris are taking a keen interest in women’s private lives.

Noting that it’s not yet clear which programs would be cut, Rep. Chris Van Hollen said he is reserving judgment on the 11th-hour spending plan negotiated Friday between the White House and Republicans in Congress, John Fritze reports for the Sun. 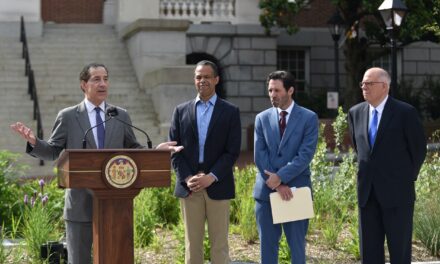