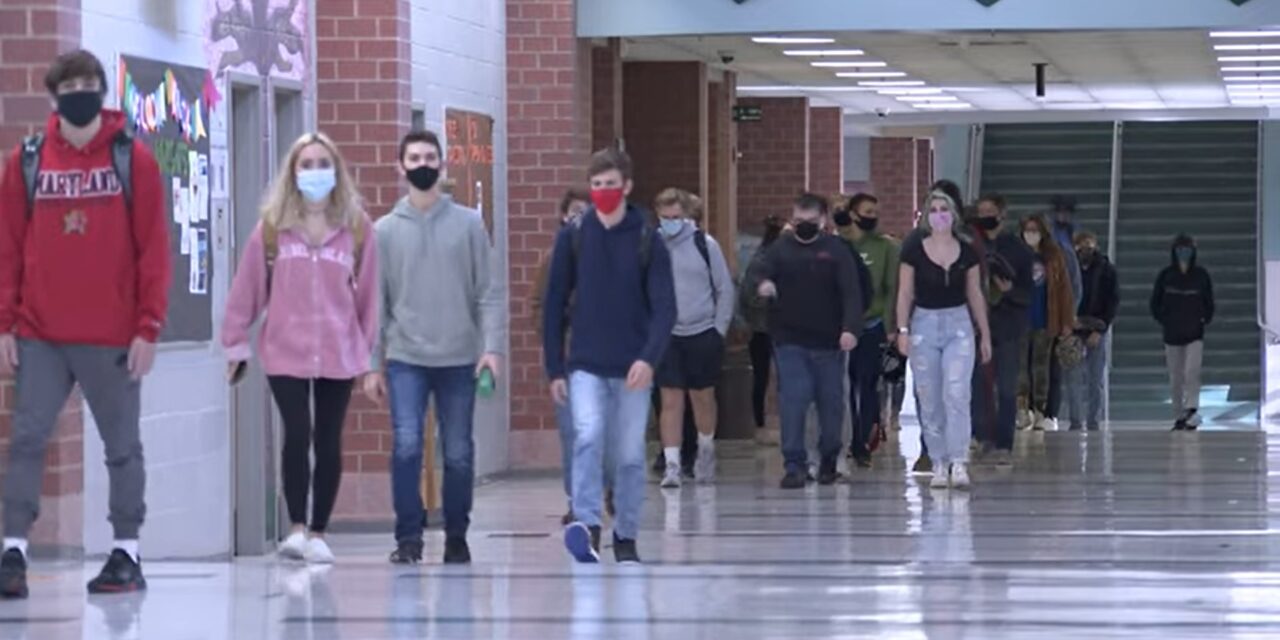 Students from an unidentified high school head back to class in this screen of a video by the Maryland State Department of Education.

SENIORS IN NURSING HOMES, IMMUNOCOMPROMISED OK’d FOR VAXX BOOSTERS: Maryland’s seniors who live in nursing homes and/or related facilities are now able to receive COVID-19 booster shots, reports Bryan Renbaum of Maryland Reporter. Gov. Larry Hogan, speaking at a news conference at the State House in Annapolis on Wednesday said, “Today the Maryland Department of Health will issue an order which makes all Marylanders 65 and older who are living in congregate care settings immediately eligible for booster shots.”

LARGE LOSS OF WOMEN IN WORKPLACE: While Maryland saw a net gain of 13,000 men entering the labor force from January 2020 to June 2021, the number of working women fell by 57,000 in the same time frame, according to the Maryland Department of Labor, Elizabeth Shwe of Maryland Matters reports.

COMMENTARY: NEW SCHOOL BLUEPRINT, MANY CHIEFS: In a commentary for Maryland Reporter, Len Lazarick writes that “As the pandemic hit, the legislature passed the Blueprint for Maryland’s Future. It is an aggressive and expensive plan to improve the performance of the worst performing students and even improve the best.” But one area it did not alter was in governance. “In some of the best achieving school systems in the world, there is generally one person at the top of the educational pyramid … whose authority to make things happen spreads down from the university to pre-kindergarten.”

REPORT BLASTS BA CO SCHOOL ADMINISTRATION: A scathing examination of the Baltimore County Public Schools by an outside consultant finds a top-heavy school system with low morale, poor communication and a dysfunctional school board. The 759-page report recommends nearly 200 changes the school system should make, reports John Lee of WYPR-FM.

1,500 MO CO STUDENTS QUARANTINED; SCHOOLS LAUNCH RAPID TESTING: With 1,500 students quarantined in a matter of days, Montgomery County officials said Wednesday that the school system soon will be launching a program to do rapid testing in school buildings to cut back on the number of students sent home. Donna St. George and Karina Elwood of the Post report that the announcement comes amid an uproar from parents who have relayed stories of classes being quarantined after a single student coughs or struggles with a runny nose.

CARROLL PARENTS SPLIT ON MASK MANDATE: Two groups of parents were represented at the Carroll County Board of Education meeting Wednesday night. One group was wearing green and the other was wearing white with shirts that said “equality not equity.” Conversations surrounding mask-wearing and education that acknowledges race have polarized parents in Carroll. And it was visible Wednesday before and during the Board of Education meeting, Kristen Griffith reports for the Carroll County Times.

PG PARENTS HAPPY, ANXIOUS OVER SCHOOL RESTART: More than 100,000 students filled classrooms and hallways Wednesday in Prince George’s County, Maryland’s second-largest school system, many of them back for the first time in 18 months as a new school year started amid the persisting pandemic. Parents and students were excited for a day so long anticipated. But for many the thrill was tinged with a lingering anxiety, as the coronavirus crisis continues and pediatric cases get more attention, Donna St. George writes for the Post.

LEGISLATIVE PANEL SEEKS RACIAL EQUITY IN RECREATION POT INDUSTRY: A bipartisan panel of Maryland delegates started work towards a establishing a racially equitable adult-use recreational marijuana industry Wednesday at the first meeting of the House Cannabis Workgroup. But one of the first experts to testify before the legislative panel warned that racial disparities in arrests could persist after legalization without significant reforms, Hannah Gaskill of Maryland Matters writes.

COURT: ED BOARDS, TEACHERS SAFE FROM NEGLIGENT DISCIPLINE CLAIMS: Neither Maryland public school teachers nor school boards can be sued based on allegations that their negligent handling of student misbehavior caused another student’s injuries, the state’s second highest court has ruled, Steve Lash reports for the Daily Record.

PITTMAN BACKS WES MOORE FOR GOVERNOR: Anne Arundel County Executive Steuart Pittman became the first Democratic county executive to weigh in on the 2022 governor’s race, throwing his support behind Wes Moore on Wednesday, reports Pamela Wood for the Sun. Pittman said he had planned to stay out of the campaign, until he met Moore and came away impressed.

DEFENSE ATTORNEY TO SEEK MOSBY SEAT AS STATE’S ATTORNEY: Tim Prudente of the Sun reports that defense attorney Roya Hanna launched her bid Wednesday for Baltimore state’s attorney, becoming the first candidate to announce a run in the June Democratic primary election. She is seeking the seat currently held by Marilyn Mosby.