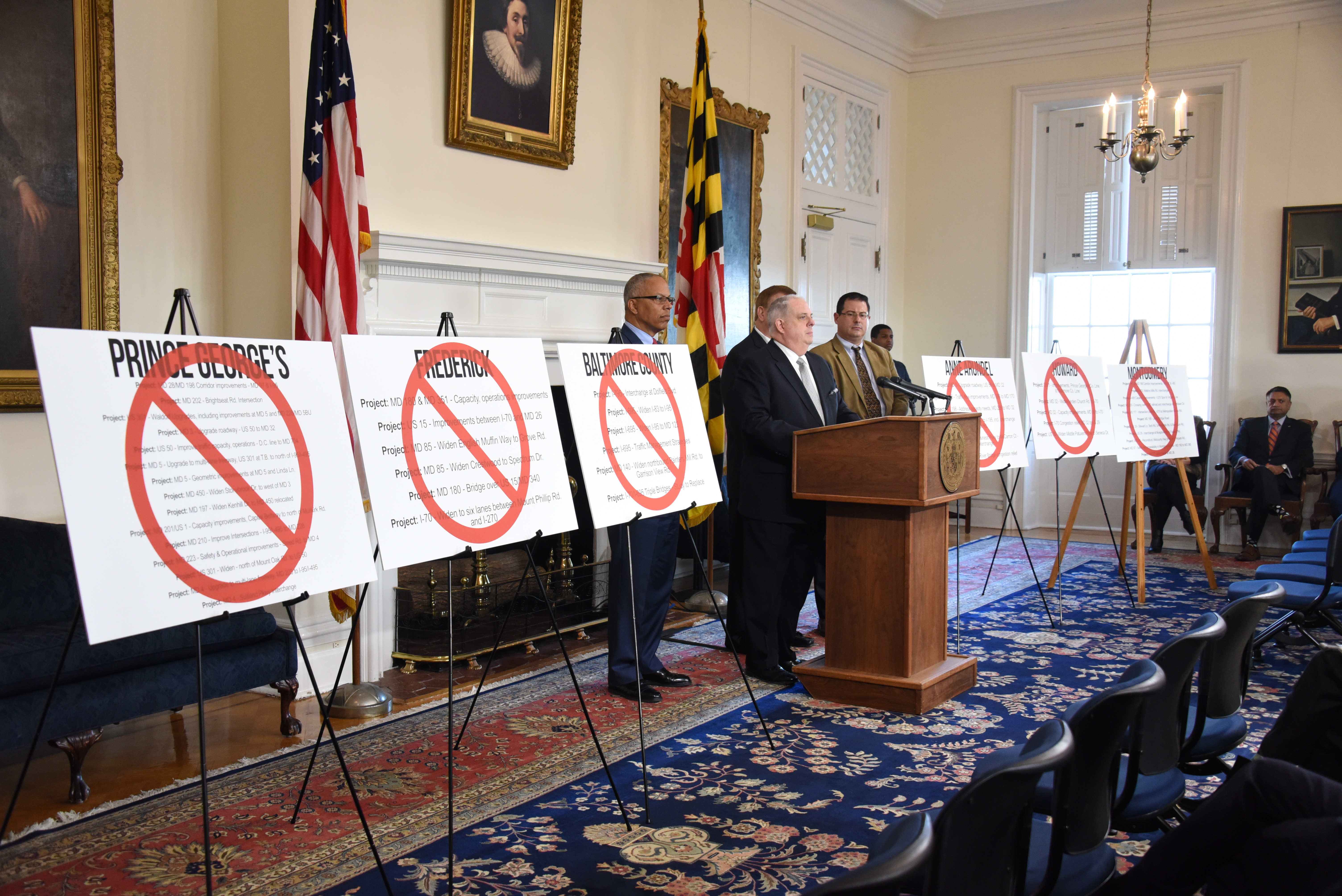 Gov. Larry Hogan presented charts of all the road projects he said would be killed by the transportation scoring law. Governor's Office photo.

You’ve got to hand it to Gov. Larry Hogan, Jr. What a prankster he is!

He’s pulled off one of the great holiday hoaxes of recent times in Maryland.

He’s got everyone convinced he is willing to kill 66 major highway projects in Maryland in order to get the legislature to repeal a law requiring a transparent advisory evaluation and ranking of big road, bridge and transit proposals.

He’s worked himself into a lather about what, for political purposes, he niftily calls “the road kill bill” saying it will “wreak havoc on our entire transportation system.”

Anyone who disagrees with Hogan’s the-world-is-ending interpretation “is ignorant of the facts.”

This repeal-law effort, he says with a straight face, is his No. 1 priority in the coming General Assembly session.

It’s got to be a holiday hoax. After all, virtually nothing Hogan is saying is based on a truthful, fact-based assessment of the situation.

He’s made the whole thing up – hopefully to give us a good laugh this joyful season (ho, ho ho!).

Under Hogan’s alternative-universe scenario, the law passed by Democrats in the legislature ties his hands and requires him to kill road projects in all but a handful of urban jurisdictions – even though that’s not even close to what the statute says.

The state’s highest-ranking legal officer, the attorney general, says Hogan’s “Rogue One” interpretation of the law is pure science fiction. But for some reason Hogan wants to play Darth Vader in this reality show.

The law has no enforcement provision.

There is no penalty if Hogan ignores the statute.

It merely calls for a quality analysis, and ranking, of proposed transportation projects. After that list is compiled, Hogan & Co. are free to disregard the results – without any negative consequences.

To drive home the point that the new law gives Hogan carte blanche to do as he pleases, lawmakers added this concluding sentence: “[N]othing in this Act may be constructed to prohibit or prevent the funding of the capital transportation priorities in each jurisdiction.”

In other words, Hogan can fund whichever road, bridge and transit projects he wants regardless of the score it receives.

All he’s gotta do is give “a rational basis for the decision. . . in writing.”

Sounds easy for Hogan to abide by this law while he continues to dole out transportation dollars any way he wants.

Not according to the governor and his transportation boss, Pete Rahn. Indeed, Rahn has put forth four pages of regulations that ensure a fiery head-on collision in which dozens of road projects will be denied state funds.

As one witness put it at a Nov. 18 hearing on Rahn’s convoluted regulations, Hogan & Co. “are determined to not make this work.”

Why would they do that?

One reason could be Hogan doesn’t have the funds to pay for all the road projects he’s promised the counties, according to the Department of Legislative Services.

DLS calculates Hogan will have to cut $315 million next year from his previous transportation proposals (and $1.6 billion over six years) to stay within the department’s debt ratio.

It seems that the six-year forecast for gas-tax receipts is falling far short of Hogan’s estimates and that the governor is overspending on transportation operations.

Something’s got to give. So naturally the politician in Hogan wants to shift blame to those evil Democrats in the legislature.

Suddenly a law that is unenforceable and totally advisory gets transformed by Hogan into Maryland’s “Nightmare on Elm Street.”

Hogan is likely to continue beating this bogus “road kill” issue to death as the 2018 election approaches.

He won’t get much help, though, from Democrats in the legislature.

It was clear at the Nov. 18 hearing that lawmakers want to work out a compromise in which the law is tweaked in ways that make it even more explicit Hogan remains fully in charge of deciding which transportation projects get funded and which do not.

Democrats aren’t going to cave in to Hogan’s illogical repeal demand. That is rightly seen as a politically inspired subterfuge.

If, as expected, lawmakers amend the law so most everyone – except the governor – is happy with the outcome, Hogan no longer will be able to blame Democrats for killing road projects.

The governor remains the only person who can put forth funds for state transportation projects.

If he fails to deliver on his earlier road-improvement promises, he’ll have to man up to the fact that it was his decision.

That’s not the posture he wants as his reelection campaign draws near, which seems to be the most likely explanation for the governor’s bizarre “road kill” holiday hoax. 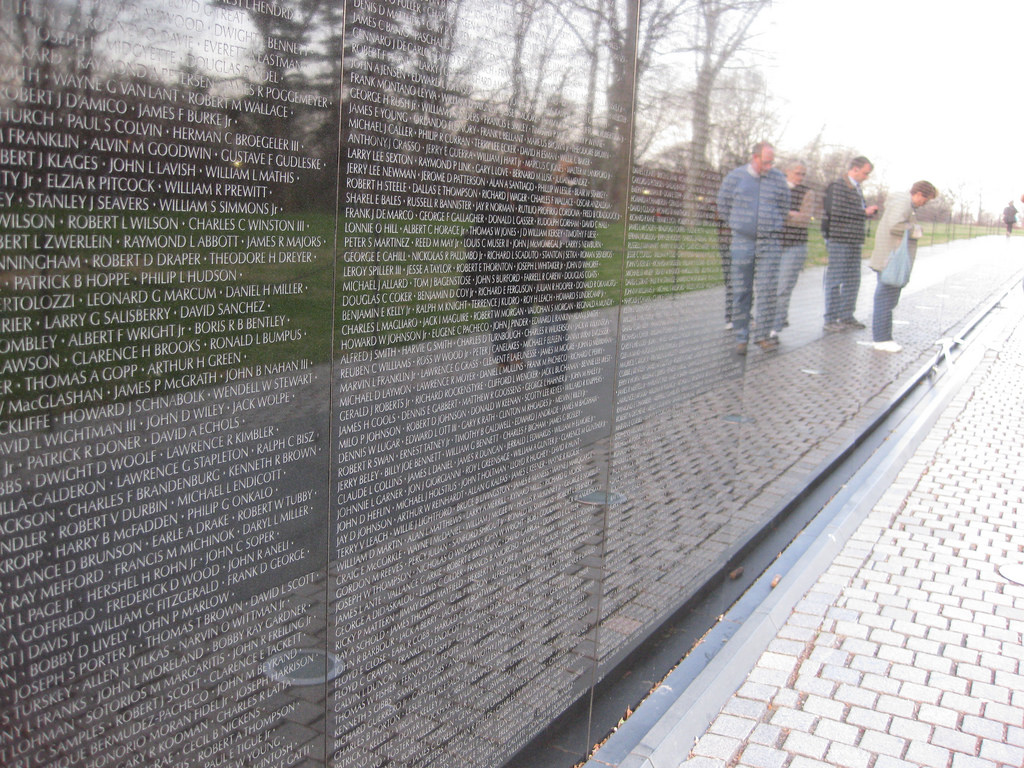