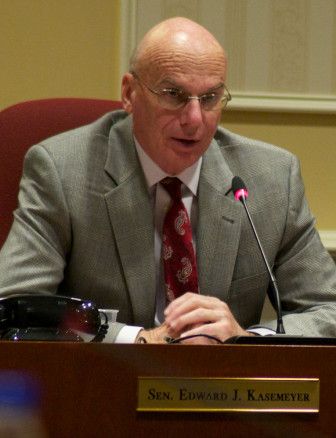 The Senate Budget and Taxation committee approved a tax relief package that will save Marylanders about $100 million a year when fully implemented.

The dollar amount was based on the total proposed in Gov. Larry Hogan’s package of tax reductions, but it was based more on the recommendation of the Augustine business competitiveness commission to reduce the top tax rate.

Taxpayers with adjusted gross income over $100,000 would save 1-3% a year, the working poor making $50,000 would save about $375 a year through an Earned Income Tax Credit, and taxpayers in the middle would get higher personal exemptions, saving $16-20 per person.

“We thought if possible everybody should be included,” said Ed Kasemeyer, chair of the committee. But he said the committee needed to “be prudent on how much” to reduce taxes and “be cognizant of the future economy of the state.”

“The proposals we’re making aren’t incredibly significant,” Kasemeyer admitted, and they provide that the tax relief would stop “if the economy goes south” and state revenues decline.

After discussing some options, the committee approved the package 11-2, with only its two most liberal members opposing the bill, SB840, a heavily amended version of the Augustine commission earned income tax credit.

“It’s not the prudent approach we should be taking,” said Sen. Rich Madaleno, the Montgomery Democrat who is vice chair of the committee.

Madaleno said that the “big takeaway” from the testimony of Moody’s Analyst economist Mark Zandy earlier this session was that Maryland should be maintaining its investment in human capital (education) and physical capital (transportation).

“Those are the things we need to keep ourselves competitive and strong,” said Madaleno, who was joined in his dissent by Sen. Roger Manno, another Montgomery County Democrat.

Kasemeyer, D-Howard, who served on the commission created to help make Maryland more competitive, said its conclusion was that “our top rate was out of line.”

“Once again the guy in the middle doesn’t get any benefit,” he said. That’s why the committee resolved to raise the personal exemptions for middle income households.

‘Giveaway to the wealthiest’

Benjamin Orr, executive director of the progressive Maryland Center on Economic Policy, called the committee package “a giveaway to the very wealthiest Marylanders, at the expense of everyone else. It can’t legitimately be called middle-class tax relief.

“Strengthening the Earned Income Tax Credit to help working people who struggle to get by on low wages is an important and welcome step that shouldn’t be paired with a tax break that gives the greatest benefit to millionaires,” Orr said.

The committee did not share it work sheets with reporters or observers during their work session.

According to Orr’s analysis, strengthening the EITC, as the committee recommended, would help hundreds of thousands of low-wage workers who currently receive little or no benefit from the tax credit. They would receive an average credit of about $375, once the credit is fully phased in. Currently the average credit is around $75, with people under 25 not receiving any credit at all.

Middle income individuals and families would only save about $16-$20 off their tax bills once the changes were fully phased in. Because this would be phased in over four years, that means they only save a few dollars per year, at a cost to the state of about $10 million per year, according to legislative staff at the work session.

Orr said the top 1% of taxpayers, who have an average income of $1.6 million, would save more than $2,500 off their tax bills, on average, when the reductions are fully phased in.

UPDATED 3/17, 11 p.m.: The House Ways & Means Committee brought its version of the expanded Earned Income Tax Credit to the floor Thursday evening, but delayed its implementation to calendar year 2018. Single people making under $36,890 would now qualify for the credit.

Unlike their Senate colleagues, the House committee has not passed any other broad income tax relief and shows no inclination to do sore.

The governor had proposed targeted tax relief for businesses, manufacturing and retirees, along with an accelerated EITC, which has always had strong bipartisan support.