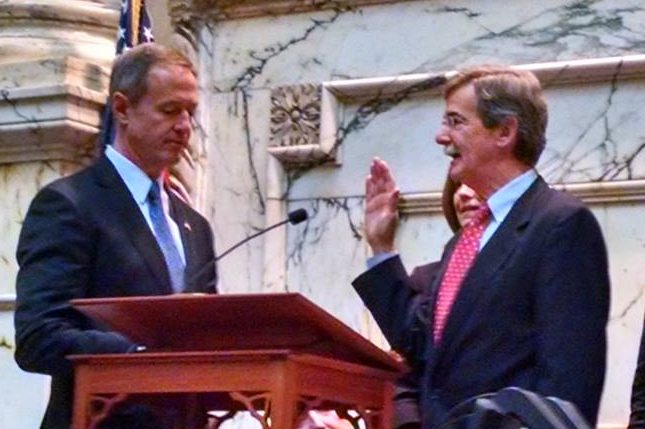 Gov. Martin O'Malley swears in Brian Frosh for his first term as attorney general in January 2015. Frosh did not seek re-election and is retiring after this term.

FROSH STRIKES DOWN RACIST AG OPINIONS: Outgoing Maryland Attorney General Brian E. Frosh announced Monday that he was overruling decades of antiquated, racist legal opinions his predecessors had issued, wiping away some of the many vestiges of systems that denied equality to Black people. Erin Cox/The Washington Post.

ABUSE SURVIVORS FIND HOPE IN AG’s CHURCH REPORT: For years, survivors of child sexual abuse — at the hands of priests, teachers, relatives and other trusted adults — have fought for more access to Maryland’s court system to hold perpetrators and their enablers accountable. The process has moved in fits and starts, with the last partial progress coming in 2017. Survivors and their allies are hopeful that a new report documenting decades of abuse within the Catholic Church in the Baltimore area will spur lawmakers to heed their calls for reform. Pamela Wood/The Baltimore Banner.

JUDICIAL SELECTION PROCESS AGAIN UNDER SCRUTINY: State Sen. Christopher West appeared before a 21-member temporary legislative panel to push for a compromise proposal on the state’s judicial selection process — for appellate and district court judges as well as those serving on circuit courts. Louis Peck/Maryland Matters.

LAWMAKERS WRESTLE WITH TAXING RECREATIONAL CANNABIS: Taxes on newly legalized recreational cannabis in Maryland could be phased in over time as the state seeks to replace an illicit market with a regulated one. Between now and July, lawmakers will have to wrestle with a number of issues. Taxes that are too high can bolster black market sales and make it tougher for a legal market in its infancy to establish a beachhead. Bryan Sears/The Daily Record.

OPINION: WHO IS THE PRESUMPTIVE GOP NOMINEE FOR GOVERNOR NOW? In most cases, the losing Republican candidate for governor would keep their spot as the presumptive nominee next time around. It happened with Ellen Sauerbrey and Bob Ehrlich. With the way that Dan Cox’s failure as a candidate decimated the Republican bench, there is no presumptive Republican gubernatorial nominee for the first time since 1994. Brian Griffiths/The Duckpin.

BALTIMORE COUNCIL OKs PENSION CHANGE AFTER TERM-LIMIT VOTE: The Baltimore City Council gave final approval to a proposal to cut the number of years required for its members and other city officials to earn a pension Monday, faulting a charter amendment establishing term limits that was overwhelmingly approved by voters this month. Emily Opilo/The Baltimore Sun.

NUMBER OF ARUNDEL VOTERS DROPPED IN 2022 MIDTERMS: The 2022 midterm elections featured a range of candidates for elected office — from U.S. Senate to governor to County Council — yet fewer Anne Arundel County residents voted compared to 2018, according to State Board of Elections data. Dana Munro/The Capital Gazette.

JUDGE DELAYS ETHICS HEARING AFTER MOSBY FAILS TO GET LAWYER: After Baltimore City Council President Nick Mosby failed to obtain a lawyer, a judge has delayed a hearing on an ethics dispute that found Mosby violated the city’s ethics ordinance by collecting money for a legal-defense fund. Emily Opilo/The Baltimore Sun.

RICHARD LIDINSKY, 79, ‘WATCHDOG OF THE PORT,’ DIES: Richard A. Lidinsky Jr., an attorney who headed the Federal Maritime Commission and was known as the “Watchdog of the Port,” died of complications from Parkinson’s disease Thursday at his Roland Park home. He was 76. Jacques Kelly/The Baltimore Sun.