$255M FOR KIRWAN IN BUDGET COMPROMISE: General Assembly budget negotiators have settled on a $46-billion-plus spending plan they will present to their colleagues later this week. The compromise spending plan includes about $255 million in initial funding for recommendations of the Commission on Innovation and Excellence in Education, Danielle Gaines writes in Maryland Matters.

SENATE OKs KILLING HANDGUN BOARD: The Maryland Senate approved a bill Monday night that would abolish the state’s Handgun Permit Review Board. The 30-16 vote now moves the measure to the House of Delegates for consideration, Pamela Wood of the Sun reports.

HOUSE GOP ASKS HOGAN TO VETO WAGE BILL: Lawmakers from Gov. Larry Hogan’s party are calling on him to veto a bill that will increase the state’s minimum wage for all businesses to $15 per hour by 2026, reports Bryan Sears in the Daily Record. The House Republican Caucus made its appeal Monday as the clock ticks down to a deadline for Hogan to make a decision on whether to veto the legislation. The minimum wage bill is one of roughly a dozen passed by the General Assembly and sent to Hogan last week.

AID IN DYING BILL: A substantially changed medical aid-in-dying bill is headed to the Maryland Senate for debate this week. Samantha Hogan and Heather Mongilio of the Frederick News-Post write that the 2019 session will mark the first time the full Senate will debate whether a person with a terminal illness should be allowed to request medical help ending their life. The House of Delegates narrowly passed a version of the bill earlier this month. With only two weeks left in the 90-day legislative session, however, the House and Senate are far apart on several key provisions and will need to find agreement in order to send the bill to the governor’s desk.

BILL TRACKER: The Sun tracks the status of a number of bills including the hike in the minimum wage, the bill the allow local school boards to decide when school will start each fall and authorizing an armed police force for Johns Hopkins University.

OPINION: SKIING ON TURBULENT WATER: The editorial board for the Annapolis Capital targets a little bill directed at curbing public hours for water skiing on a creek in Anne Arundel County, opining that if the House approves state Sen. Ed. Reilly’s legislation restricting hours, lawmakers will be taking a precarious step toward chaos on the water.

ETHICS PANEL URGES REPRIMAND OF DEL. JALISI: The Maryland General Assembly’s ethics committee is recommending a public reprimand of Del. Jay Jalisi of Baltimore County for “an ongoing pattern of bullying and abusive workplace behavior.” A 16-page report was delivered Monday night to lawmakers, outlining the investigation from the Joint Committee on Legislative Ethics, Pamela Wood and Luke Broadwater of the Sun are reporting.

UMMS ANALYSIS: LEGISLATIVE ACTION MUST BE STRONG: In the final segment of his two-part series on the Mess at the University of Maryland Medical System for Maryland Reporter, auditor Charlie Hayward argues that proposed emergency legislation is unlikely to be fully responsive to red flags. He also describes why American Hospital Association guidance UMMS proposes using as best practices can be improved and lists some of the elements of a credible audit.

ETHICS COMPLAINT AGAINST PUGH: A retired public corruption investigator filed a complaint Monday with the Maryland State Prosecutor against Baltimore Mayor Catherine Pugh, alleging she deliberately did not report her Healthy Holly company in annual disclosure forms when she was a state senator, reports Doug Donovan for the Sun.

PUGH HOSPITALIZED: Baltimore Mayor Catherine Pugh has been hospitalized with pneumonia, her adviser said Monday. She was admitted to Johns Hopkins Hospital on Sunday night and is being held for observation, said Greg Tucker, an adviser to Pugh, Ian Duncan writes in the Sun.

HOGAN PRESSES CONGRESS ON BAY FUNDING: Gov. Larry Hogan is pressing congressional leaders to not only block an attempt by the Trump administration to drastically cut federal funding for the Chesapeake Bay, but increase it to $90 million, Pamela Wood of the Sun reports. President Donald Trump’s proposed $4.7 trillion budget, released earlier this month, includes a 90% cut in funding to the $73 million Chesapeake Bay Program, which oversees the multistate bay restoration effort.

OPINION: BAD LARRY TRUMP: Political columnist Barry Rascovar of the Political Maryland blog writes that the two faces of Maryland’s governor — the good Larry Hogan and the bad Larry Trump, were on display recently. Unfortunately, it looks like Larry Trump is gaining ground. After all, it wasn’t until last week that Maryland’s governor informed us that Democrats in the state legislature are “the most pro-criminal” bunch of losers he’s ever seen.

‘FAR APART’ ON PURPLE LINE: Katherine Shaver of the Post reports that Maryland officials and the contractor building the Purple Line are “still far apart” over when the light-rail line will begin carrying passengers and how much it will cost to offset construction delays, a top state transit official said last week.

HOGAN PRAISES JOURNALISM: Gov. Larry Hogan, who is weighing a primary challenge to President Trump, drew a sharp contrast with the president’s anti-media rhetoric Monday, telling a crowd of hundreds at a journalism awards banquet in downtown Washington that he respects reporters and their “noble profession,” Erin Cox reports in the Post.

GERRYMANDER CASE: The Supreme Court is returning to arguments over whether the political task of redistricting can be overly partisan, Mark Sherman of the AP reports. The cases at the high court Tuesday mark the second time in consecutive terms the justices will see if they can set limits on drawing districts for partisan gain. Or the court could rule that federal judges should not referee disputes over districts designed to benefit one political party.

STUDENT’s WIRETAPPING PLEA: A Salisbury University student pleaded guilty Friday to an illegal wiretapping charge after he live-streamed a meeting with a congressional staffer for Rep. Andy Harris without permission. In an agreement with state prosecutors, Jake Burdett, 21, pleaded guilty to one count of illegally recording the staffer. As part of the agreement, Burdett received a probation before judgment, which means police records will not show any criminal convictions, and he will need to complete 100 hours of community service, Lillian Reed of the Sun reports. 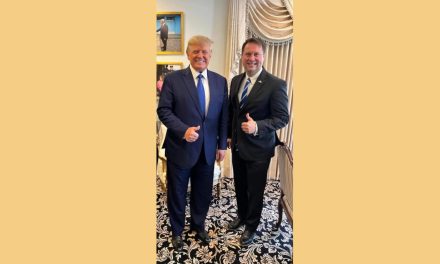